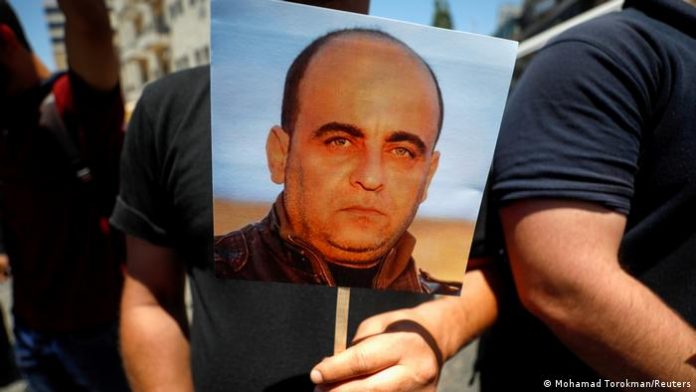 “Banat was a simple man, a craftsman with a good heart,” his lawyer wrote. “He loved his family and his four children – and he was very brave.” Over the past ten years, he has repeatedly represented his client Banat in court, a man who was known in the Palestinian West Bank as a critic of President Mahmoud Abbas. But now he can do nothing more than support Banat’s family with legal advice. Because the critic is dead. Died immediately after his arrest. Allegedly killed by a squad of the Palestinian security forces.

“We spoke on the phone two days earlier, and for the first time I had the feeling that Banat was afraid,” the lawyer says. Most importantly, this incident sparked a wave of demonstrations in the West Bank.

The lawyer reports brutal violence against demonstrators and around a hundred arrests since Banat’s death. Opposition members were among them, journalists – and he himself. The police had picked him up in the courthouse, and after three hours at the station he was allowed to leave.

The Palestinian leadership is nervous because some people compare Banat’s death to the murder of the Saudi regime critic Jamal Khashoggi. Others are already speaking of a “Palestinian spring” with a view to the protests, in which, ten years late, the Arab rebellion against the encrusted authorities has now also reached Ramallah.

“Abbas, go,” it says on their banners. The president has rapidly lost support. According to a survey, only 14 percent of Palestinians are still happy with his rule, which has been in effect since 2005. But there is little to suggest that the 85-year-old, who recently canceled the elections planned for this summer, wasted a single thought on withdrawing. Rather, it is expected that he will rule with a hard hand in order to secure his power and the benefit of his followers.

Anyone looking for an answer to the question of where the Palestinian West Bank is currently slipping must first go back to June 24, when the security forces broke into Nizar Banat’s house in Hebron at night to arrest him. The 43-year-old had often challenged the ruling Palestinian Authority (PA) with allegations of corruption and nepotism. But now he had gone further and asked the Europeans to stop their financial aid for the PA because of the mismanagement.

Banat was dead just an hour after his arrest. The autopsy revealed blows to the head, neck, chest, arms and legs. The Palestinian Justice Minister was quick to admit that Banat died “not a natural death”. For his lawyer, however, it is clear that the critics of the regime received a warning with the death of Banat. “Now everyone knows that not only can they be brought to justice, but they can also be killed,” he says. “That’s why many have already become more cautious and fearful.”

The demonstrators, who took to the streets in other cities in the West Bank as well as Ramallah, did not allow themselves to be deterred. But Banat’s legal representative complains that no major groups have supported the protest movement. “We need the support of the parties,” he says.

However, it will hardly come to that. “The demonstrations are being carried out by civil society alone, and it is unorganized and leaderless,” explains the director of the Palestinian polling institute PSR. “So it’s not a Palestinian spring, because that would mean civil war, and nobody wants that.”

He has been keeping records of the president’s decline in popularity for many years. The last value he determined of only 14 percent approval is a “low point”, he says. But he does not see this as a threat to Abbas’ power, because the main forces of his Fatah party and the security apparatus are still behind him. “Authoritarian leaders don’t need public support,” he explains. “Abbas still has everything he needs and can do what he wants.”

Abbas is also supported by the international community. The Europeans are reliably transferring their financial aid, and US President Joe Biden recently resumed the payments to the PA that his predecessor Donald Trump had suspended. Critics to this aid would like “that the international community demands in return that the PA support positive change”. But they also know that Abbas is seen in the West as a guarantor of stability and a bulwark against the Islamist Hamas, a terrorist group.

After all, there was a warning call from Washington after the death of Nizar Banat. In a public statement, the US State Department was “deeply disturbed” and expressed “serious concerns about the Palestinian Authority’s threat to freedom of expression and persecution of civil society activists and organizations.”

Now, a commission has been set up to investigate the death. 14 directly involved are already in custody.

Banat’s family is not satisfied with that. They speak of a “political execution” and warn of a cover-up. And the demonstrators don’t want to rest either. For the next days they call again to protest in Ramallah. It is the 40th day after Banat’s death on which, according to Muslim tradition, the mourners gather.