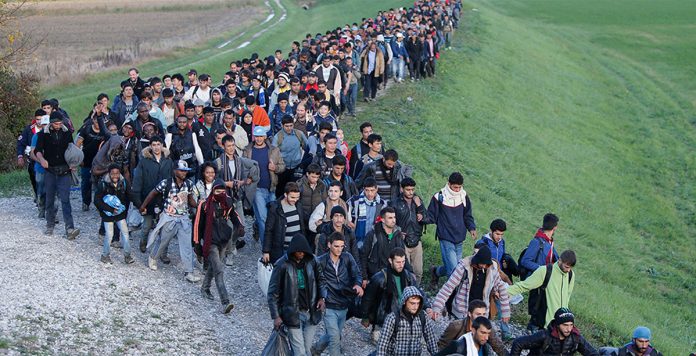 Migration to Turkey, and from Turkey to Europe, has become one of the most critical issues that concern multiple international bodies, such as human rights organizations, the UN, and the European Union.

A few years after the immigration door to Turkey was opened wide by the Turkish government, Turkish voices opposing the government’s policy began to rise racially towards refugees in Turkey, Syrians in particular, leading to racist attacks on refugees.

This is all addressed in three parts through the following:

Turkey has become a main station for migrants destined for the EU to escape humanitarian, political and economic conditions, as well as the civil wars in their countries. Turkey has become a destination for migrants since the beginning of the Syrians migration at the beginning of the Arab Spring. The Syrian refugees provided the largest free propaganda for Turkey and its government about the good treatment they received, starting with the Turkish people, accompanied by emotional political speeches delivered by Turkish President Erdogan.

Migration to Turkey was a first stage on the way out for immigrants of their country, called by the majority of them from different countries and nationalities who found in Turkey a primary sanctuary “passageway, not a stable home.”

Between 2012 and 2015, Turkey was home to the majority of Syrian migrants in particular and non-Syrians in general, because of the good treatment they received from its government and people, Erdogan’s speech to the gathering of Syrian migrants in the border city of Urfa was encouraged by what he said: “We are the supporters and you are the migrants.”

Because of the economic conditions of the migrants, the Turkish government’s lack of any assistance, and the high cost of life in it, all of these made them start migrating towards EU, which was covered by media from different countries of the world, especially the huge mass migration of Syrians in 2015 and others from various countries towards EU through Greece.

The Turkish government has exploited this migration by pressuring the EU to improve the terms of its negotiations with it on many related issues, including financial assistance provided by EU to refugees to settle in Turkey, and the admission of Turkey as a member of the European Union.

New migrations to and from Turkey!

The good treatment received by Syrians in Turkey prompted the vulnerable to migrate from their country to Turkey, that’s make it the first stage in the migration route before heading to EU, to start migration flights from Turkey continuously without interruption. The pace of migration increased significantly after mid-2022 as a result of the deterioration of economic conditions in Turkey on the one hand; when refugees arrived from Egypt, Tunisia, Morocco, Algeria, Somalia, Afghanistan and even Palestine to Europe on the other hand, in addition to Turkish citizens, they entered EU in a different way to work in. But the large number of Syrian immigrants from Turkey via Greece characterized as a new and large Syrian migration wave, similar to the migration of 2015.

The reason for this year’s increase in migration from Turkey to the EU is the upcoming electoral political conflict in mid-2013 in Turkey, this conflict led to a racist reaction on the Turkish street against refugees in general, and Syrians in particular, which pushed them to a massive mass exodus again towards EU.

The refugee situation in Turkey:

The Political Dimension of Migration from Turkey to EU

In early 2012, Erdogan’s speech became close to the feelings of persecuted Muslims in their country that he is their protector and guardian, which has plunged Turkey into many diplomatic and political crises, including with Egypt, the UAE, Saudi Arabia, and other countries. Turkey has become a media platform used by opposition refugees in their conflict with their country’s authorities.

Erdogan embraced the Islamist opposition in particular, of which the Muslim Brotherhood (MB) formed the largest one. A term appeared in the Turkish media and Islamist oppositions to describe Erdogan as the big brother, a phrase that has a connotation and a guardianship of the leaders of the various oppositions present on Turkish soil..

Election campaigns exploited the refugees’ card and increased its investment after the deterioration of the Turkish lira, which made Erdogan and his party remain in authority threatened. After the cracking of the leadership of his Justice and Development Party (AKP) as a result of many differences, then the withdrawal of former President Abdullah Gul from it, followed by the party’s policy theorist Ahmet Davutoglu, the former Turkish Foreign Minister, Erdogan’s uniqueness in leading the party and the government, pushed him to abandon the embrace of refugees in general, and Syrians in particular, and to open back channels with the Syrian regime for understanding and to restore relations between them, which constituted a real horror for Syrian refugees, which was accompanied by the arrival of news from inside Syria of the Syrian regime’s liquidation of groups that returned to its areas of control. To start a new wave of migration of these refugees in general from Turkey towards EU to save their lives from the fluctuations of the Turkish government’s policy towards them

Various Turkish obstacles have prompted refugees to migrate to EU!

The Turkish government was not hindering the renewal of refugee residency on its territory before the crisis of the Turkish elections, those in multiple Turkish provinces could move between Turkish states easily to work, but political differences between the Turkish government and the EU, the deterioration of economic conditions in Turkey, and anti-refugee campaigns pushing the Turkish government to tighten too much on refugees. So the granting of a refugee protection card is subject to insurmountable conditions, it has made new refugees in an illegal situation in Turkey.

How is a refugee protection card granted in Turkey?

Previously, Turkish municipalities granted a refugee protection card (Kamelek); which allowed him to leave the state only with the permission of the security department of the same state, with a limited duration, but this procedure was a formality, which did not prevent refugees from moving without permission and working in other states if they had a job opportunity, but after Turkish/European disputes and election campaigns, it became forbidden for a refugee to work in a state other than the state from which he holds the protection card (Kamelek).

This means that employment opportunities for refugees are starting to narrow, That law has been exploited to control the wages of refugee workers, especially since the majority of refugees were in the southern provinces adjacent to the Syrian and Iraqi borders, and job opportunities in those provinces are almost non-existent. This is why refugees take the protection card because it is easy, and then go to work in major cities such as Istanbul, Ankara, Izmir, Mersin and others.

But after the Turkish authorities stressed the movement of refugees, then a decision was issued that anyone who violates these instructions will be deported from Turkey to Syria, where the areas controlled by the armed opposition. This prompted these refugees to seriously consider leaving Turkey for EU, no matter how fraught the journey.