Digging deep into the grooves of Islamic heritage, particularly the jurisprudent scripts, we can see that the case of women in Islam is part of the controversial concepts over which Islamic groups haven’t come to a compromise. These concepts have always affected women’s social and political practices. Sufi trends gave wider margin for women to participate in spiritual and social practices. But this upheaval didn’t develop into a struggle for the social equality with males. This role of women has developed into a religious institutional movement called Qubyseyats [1] .

As a completion of part one of this study: “Religious Feministic Movement, Gender Jihad”, this part of the study focuses on Al Qubaisyats Movement which is dominant in Syria.

Long time ago, women gathered in organizations and movement with different political aims in different areas of the World. Some were against wars; some other ones were mediators to settle disputes. During the 20th century, women were keen on establishing feministic groups all over the World. But, in the Arab and Islamic World, these entities remained a shadow-like and disabled entities burdened with suppressive religious concepts and traditions. No free will has been associated with these movements. This disability created a huge gap for radical patterns opposing western concepts related to the liberation of women. Feministic movements were bound to narrow margins made by Sufism, so they turned into radical feministic movements that can never penetrate deep in the spiritual whatness to make the aspired change in women’s status. Women were only granted the chance to be proselytizers with different names like Kubaisyats, Sorcerers [2], Teba’yats[3] and Girls of Grasslands [4].  The name is after the founder. The influence of these movements extended to Syria, Lebanon, Jordan, Egypt, America, Europe and Australia.

Religious Feminism, from Sufism to Ideologization

Ever since the fall of the Rashidi rule, concepts about women status and tier social role have been heterogeneous. When jurisprudent constants prevented women from reading and interpreting the holly scripts, women gained some status with Sufi piety.

Apart from the different attitudes towards women, we are going to focus on Sufism which is a post-structuralism narration adopted by feministic movement to resist the manly authority. The aim was to undermine this authority and to make both man and woman melt in a misty entity that has no specific traits. With Sufism, Feministic movement found a chance for full participation in social upheaval and reform. For female Sufis, it is a chance for the woman to prove herself following the middle ages which distorted the original image of woman as it was set by Islam. Direct communication with Allah through the interpretation of the scripts of Quran was the only way to break the isolation of women in a man-oriented society.

This Sufi experience is no longer limited to spiritual communication with Allah. Rabea’a Al Adaweiah is no longer existing just like all female proselytizers. The new trends are sometimes close to Sufism and sometimes fall apart from Sufi concepts and dominant perceptions. The most ideologized representation of this new trend is Kubaisyats Organization and the like.

The Qubaisyats Organization emerged from the womb of Sufism and the socio-cultural structure of the Syrian State. Sheikhism [5]and its deep roots in the history of Syrian society constitutes the incubator of most religious and proselytization activities. Religious lessons, love-of-prophet rhythms and other religious celebrations are distinctive features of the Syrian conservative families.

This organization extended outside Syria through its members who started their activities abroad and managed to establish their own societies. In Lebanon, Sahar Halabi founded her society and her followers were named after her “Saharyat”, whereas in Jordan, Fadia Taba’a established a similar society which is known as “Taba’yat”. Amira Jebreel, sister of Ahmad Jebreel, leader of the Public Front for Liberation of Palestine, established “Peace Grasslands” which later became the most important society for Quran memorization and studies of Sunnah in addition to charity sooqs. These names were not given by members of these societies themselves.

Establishment and spread within Syria

Ever since the 1960s, the name of “Qubaisyats” was circulated by some Syrian families through the foundation of the group and her grand female sheikh, “Munira Qubaisi” graduate of the Faculty of Sharia, who was taught by Sheikh “Ahmed Kuftaro,” Mufti of Syria in 1964 with Naqshbandi Sufi trends. She was also taught by Muhammed Saeed Ramadan Al-Bouti “Dean of the Faculty of Sharia in 1977, who was known as a thinker and author of studies more than a mystic or the owner of a method.

Kuftarism, from Ahmad Kuftarow, is characterized by a strong presence among the popular and middle classes in Damascus as well as the new bourgeois class that was formed with the economic privileges gained through personal relations with the state institutions with their formal Islamic model, and it was part of the path of Kuftari- Naqshbandi way. The political pragmatism that prevailed in Syria after the rule of the Baath Party established a sacred alliance between the Sunni bourgeoisie with their moderate Islam and the ruling authority.

In this context “Qubaisyats Movement ” flourished depending on the noble development and good relations with the Damascene families. To increase its influence, it approached the Islamic groups in Syria, such as the Fateh Institute for Miss Sua’ad Mayber, the religious group of Sheikh Abdul Karim Al Refa’i, who contributed to the foundation of “The Marvelous Association” in 1924 under the chairmanship of Mohammad Hashim Al Khatib Al Husseini.

The Qubaisyats community was very popular because of its administration of religious schools which were intellectually controlled by various religious movements, appeared to attract girls to social activities outside schools uch as the Institute “Ms. Rukaya” Shiite”, which is the reference to a number of schools and institutes that are proselytizers for gathering advocates.

These schools gained popularity in Damascus as they attracted many girls to theoretical recitation knowledge rather than experimental and applied sciences. In 2006, they had 80 schools in Damascus.

From dark corners to light

This movement remained unnoticed for decades until Salafi trends in Kuwait and Jordan started a campaign against it as it gained economic and social momentum. The media started talking about it.  However, most of the reports made about it, were based on rumors rather than investigation. It was formally licensed in 2006. Qubaisyats were ordered to move their activities from their houses to mosques to make it easier for the authorities to follow-up on them. 175000 girls and women have joined. 25000 in Damascus and its suburbs. More than 49 mosques in Damascus are used by Kubaisyats.

Qubaisyats Movement has spread due to many reasons:

Qubaisyats, a religious and political controversy

Different analyses of this phenomenon have been done because of the secrecy and isolation that behold this organization. Therefore, it has been criticized by Salafist, secularists alike. Kubaisyats have been accused of many misconducts and some consider them to be an extremist Sufi movement as they are fund of recitation and love-of-the-Prophet songs with religious intoxication.

Some critics consider them to be a ghost behind the scene for the state and they can penetrate it and gradually establish an Islamic state like Taliban in Afghanistan.

However, Dr. Muhammed Habash, professor of Islamic Studies in Abu Dhabi University, emphasizes that Qubaisyats Organization is a true representation of the Syrian conservative society, especially in Damascus. Qubaisi discourse is no more than the discourse of traditional Sheikhs who have promote submission to the ruler for half a century.

Dr. Habash criticizes priesthood as most of them are divorced. Most of them abstain from marriage and any relationship with men. It is very identical with Sufism which encourages breaking the barriers of time to get to eternity.

They believe that the call for true faith shouldn’t be monopolized by men. Qubaisyats believe that they can liberate the souls of women from sins and get to the realms of forgiveness.

Qubaisyats have been harshly criticized for their allegiance to Assad’s Regime contrary to Sufism which abhors any political affiliation. Celestial relations are a mere violation of the anthological nature of the individual who is supposed to follow the righteous path. In Syria, no Islamic movement can escape political involvement with the ruling regime.

In 2014, Qubaisyats promoted Assad’s regime when 4000 Qubaisis had a celebrity. It was called for by focal Qubaisi. Although Mrs. Qubaisi, the godfather, refused to nominate a parliament member in 2007 in order to avoid accusation of political utilitarianism, their involvement in pro-Assad political promotion. Anyway, Farah Hamsho, sister of the famous businessman, Mahmoud Hamsho was nominated as a member of the people’s assembly.

They demanded separation of the two genders at schools. Of course, Syria has co-education and separated schools which means there is a public ground for this demand.

Salma Ayash was nominated deputy of Minister of Wakif in 2014. With the increasing discussion about Qubaisyats and their influence on the ministry of Wakif under the title of Quran teachers, Assad’s Regime denied the existence of such organization although the regime had praised its solidarity with Assad before. This organization has balanced between Islamic ideology and the allegiance to the ruling regime.

The recent changes that blew up Syria caused the defection of many advocates of Kubaisyats as they joined the Syrian Revolution. Even pro-Assad entities protested against this organization because they considered it to be a copy of Muslim Brotherhood Movement. Therefore, Qubaisyats started conducting symposiums on fighting extremism and terrorism through educating children not to join terrorist organizations.

If the Feministic Islamic Movement really wanted to liberate society from the male domination by liberating culture and jurisprudent heritage and enhancing a greater role for women, Qubaisyats went astray and encouraged gender sectarianism. It never established a course for salvation of women through self-assertion and liberation from the traditional role of women that was imposed by traditional jurisprudence.

[2] A Lebanese version of Qubaisyats

[3] A Jordanian version of Qubaisyats

[4] A Kuwaiti version of Qubaisyats

[5] A state in which society if completely governed by Sheikh

[6] A prominent Qubaisi woman who leads groups of Qubaisyats 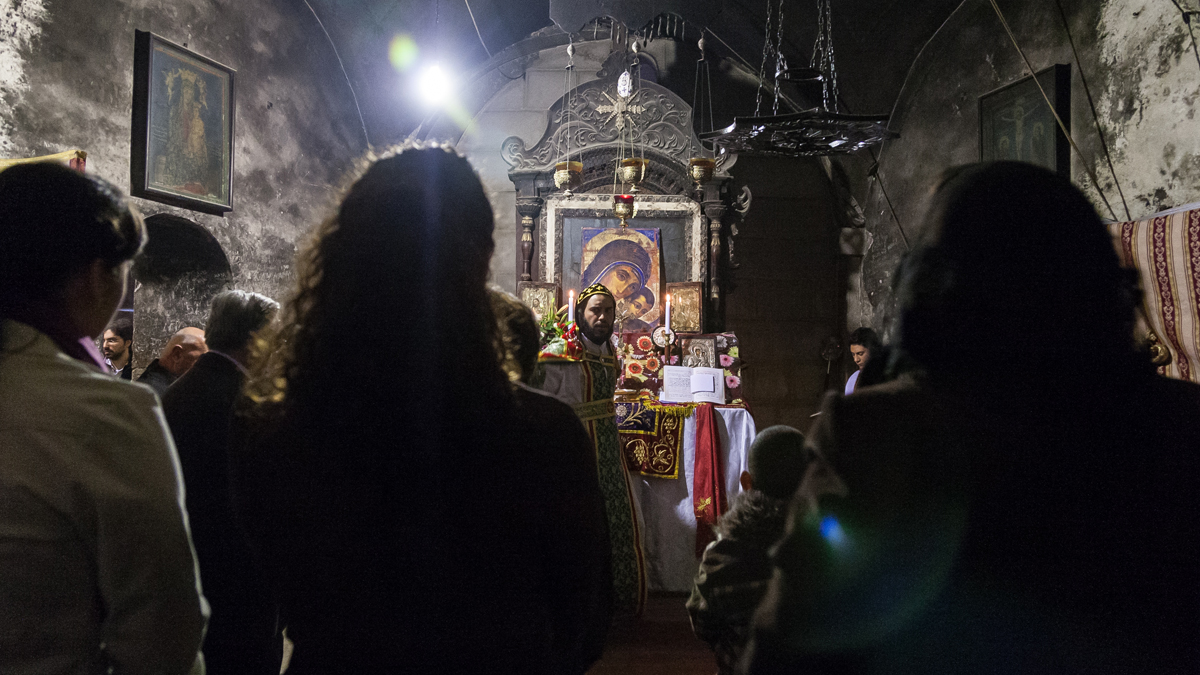 Social Diversity and its Effects on the Political Situation

Feminist Organizations in Syria during War; Experiences and Testimonies
Tags: ReligionWomen
No Result
View All Result