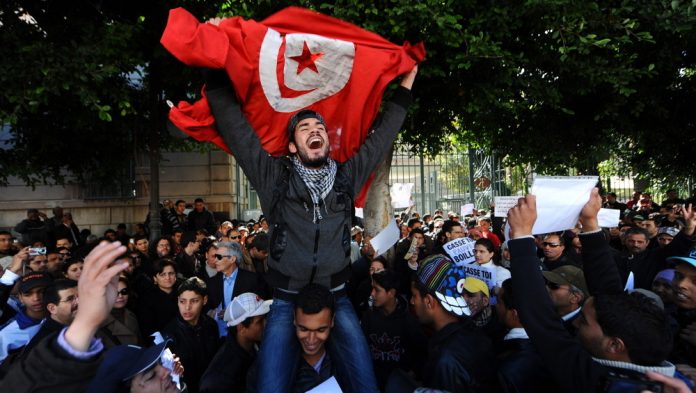 On December 17, 2010, an obscure fruit seller named Mohammed Bouazizi set himself on fire to protest the capricious authoritarian government that robbed him of his livelihood. He lit a spark that inflamed the Muslim world and spread to Egypt, where protests began ten years ago today on January 25, 2011. Although liberty movements swept the region, toppling autocrats like Egypt’s Hosni Mubarak and Tunisia’s Zine al-Abidine Ben Ali, an assessment of citizens’ rights and liberties in 2021 is disheartening. Little has changed.

When it comes to the first freedom, that which is tied to speech, conscience, assembly, the press and printing, and private property—religious freedom—the situation remains troubling. Despite the fact that nearly all Muslim-majority countries have signed on to international covenants promoting religious freedom and despite the fact that many constitutions in the region purportedly support religious diversity and pluralism, the region has become less free over the past decade.

Rather than pointing to the scourges of al-Qaeda and the Islamic State, we must recognize that there is a fundamental misunderstanding about religious freedom, especially in regions where there is a French colonial past. Overcoming the misunderstanding about “separation of church and state” and the issue of divine vs. popular sovereignty will allow Muslims in the region to support religious freedom for all, including the sizable religious minorities in their midst. Repression, whether Saudi Sunnis repressing their Shia minority or the plight of Christians in Egypt’s countryside, leads to insecurity and violence. A path toward law, order, justice, and representative government must embrace religious freedom.

“Separation” of Church and State and Laïcité

In a 2008 speech, Brookings Institution scholar William Galston outlined a basic misunderstanding about religion and the US in the Muslim world:

Galston is talking about laïcité. Many Muslim-majority countries, including Lebanon, Tunisia, and Algeria, have direct experience with French political institutions, including this “militant secularism,” the French approach to dividing church and state. Although laïcité sounds superficially like America’s “separation of church and state,” it is fundamentally different: in the US, “separation” restricts the government from interfering in religion; in France, laïcité shields the government and society from the influence of religion.

Laïcité, a legacy of the French Revolution, spread throughout its colonies. The French revolutionaries distrusted religion, specifically the Catholic Church, as a pillar of the ancien régime, resulting in numerous efforts to subjugate the Church, including government acquisition of religious properties, requiring priests to take an oath of loyalty to the Republic, and persecuting those who refused to do so. The second half of the nineteenth century saw the Church’s fortunes rise and fall based on France’s turbulent political climate (Church and state were officially separated in the French constitution in 1905). But laïcité was essentially codified politically—and ultimately culturally—in French national life. That reality is simple: religion is an absolutely private matter. It has no place in the public sphere.

The official French position today is that this separation of religion and state is the foundation of freedom for all citizens. The policy has come under fire recently as laïcité’s suspicion of religion has resulted in a ban on religious clothing in public schools and other policies that are seen by many to prevent the freedom of religious expression. For the past decade, people in North Africa routinely see reports of French Muslims mocked and even put on trial for wearing the hijab and practicing their faith. Even beyond colonialism, French laïcité is divisive.

Unfortunately, many people in highly religious societies assume that the US version of “separation” is identical to the French. Consequently, the claims of Western democracy—if separationism is a key tenet—can never be accepted by many in the Muslim world. However, this need not be. The American concept of “separation of church and state” is neither a fusion of religion and government nor the exile of religion from the public square. Instead, it is what Alfred Stepan has called “twin tolerations: the minimal boundaries of freedom of action… for political institutions vis-à-vis religious authorities, and for religious individuals and groups vis-à-vis political institutions.” The American system is one where the First Amendment to the US Constitution expressly forbids government intervention in religion, but anticipates a robust religious public. In the United States, both private and public—but not government—expressions of religion flourish, from acts of veneration in houses of worship to religiously inspired actors engaging in debate on major issues in politics and society.

Moreover, as discussed above, religious liberty is part of a wider bundle of liberties that involves freedom of speech, press, and assembly. Ironically, the US “separation” provides a greater opportunity for faiths to practice than most other systems, and it provides a formal check on the invasive power of the central government to keep it from attempting to utilize religion instrumentally for its own purpose.

A second misperception is conflating America’s political concept of popular sovereignty as being incompatible with the religious concept of Allah’s sovereignty. In American democratic theory, the notion of sovereignty derives from the assumptions of the social contract: individuals willingly assign some of their rights to the state in exchange for protection. However, in democracies this exchange is assumed to be willing, hence in theory the creation and sustenance of the state is predicated on the decision of the sovereign populace. The American revolutionaries argued that their break with the English Crown was on just such lines: London had lost its claim to govern because it had abused its power—the sovereign people were asserting themselves in forming a new association.

Hence, the “consent of the governed” assumes a sovereignty of the citizenry when it comes to governance. However, that sovereignty is not a religious concept per se. Indeed, the Declaration of Independence states that rights (and thus human agency) derive from a Creator, although the Founders were ambiguous about what that means. The Declaration makes no claim that the sovereign people are the ultimate repository of truth or morality; indeed, the opening of the Declaration refers to the “Laws of Nature and of Nature’s God.” This suggests that an ultimate moral code does exist outside of the whims of the consenting governed.

Consequently, the idea of sovereignty in American democratic theory is a political idea for how governments should be established and operate—in ways that are consonant with morality and based on—and limited by—the sovereignty of the citizenry. That sovereignty only extends to the political realm, both to check unrestrained government power as well as to underscore the opportunity and responsibility of citizens to constructively advance “life, liberty, and the pursuit of happiness.”

For Muslims, the word “sovereignty” immediately connotes the omniscience and omnipotence of Allah, and therefore critics like Sayid Qutb, Osama bin Laden, and other Islamists reject Western “separation of church and state” and “popular sovereignty.” They argue that humankind has rebelled against Allah’s truth and chosen not to listen to the interventions that Allah has sent in the person of the Prophet Muhammad and the Quran. For Islamists, and many faithful Muslims, there is not only a universal moral order but also a socio-political order clearly specified in the Quran based on the sovereignty of Allah. God has provided man “divine guidance concerning everything… including faith, morals, values, standards, systems, and laws.”[2]

Thus, for many Muslims, Western notions of democracy are at best problematic and at worst heretical because religious understandings of “sovereignty” and “church-state separation” seem to be anti-faith. Those calling for religious liberty, usually Christians, Jews, and other minorities, are immediately suspect due to their ties to the West. A senior al-Qaeda official, Abu Yahya al-Libi, made this argument. Democracy is a “mirage” containing “slogans of freedom, and deception of equality.”[3]

It need not be so. The reason that the United States has had a relatively peaceful history is because it recognized that robust religious freedom allowed for individual and corporate religious practice, at home and in the public square. Religious adherents could argue for their understanding of the truth without resort to government intervention or violence. This is not inter-faith dialogue or post-modernism: this is respect for the truths of our faiths and working to decrease the power of authoritarian governments over every aspect of our lives.

Imagine a third Arab Spring where Iran protected Christians, Ahmadis were free to worship in Pakistan, Egypt, and Nigeria, and religious minorities and dissidents did not fear arrest and torture across North Africa and the Arabian Peninsula. Perhaps Iraq, Syria, and Lebanon would return to a level of peaceful coexistence. A region of true pluralism would have less government intrusion in other freedoms, such as speech, assembly, education, and publishing, thereby deepening law and justice. Perhaps rethinking “popular sovereignty” and “church-state separation” is a critical step in the right direction.