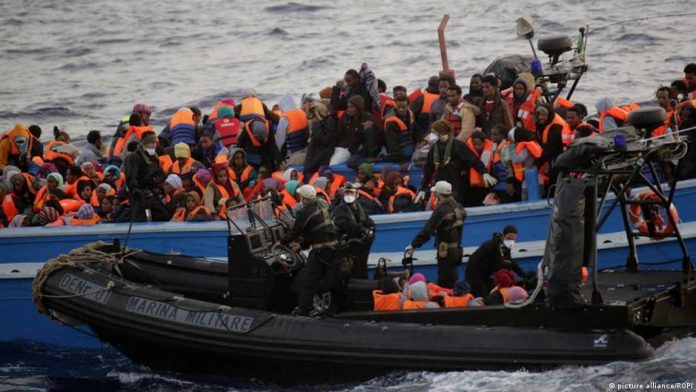 EU member states have used illegal operations to push back at least 40,000 asylum seekers from Europe’s borders during the pandemic, methods being linked to the death of more than 2,000 people, the Guardian can reveal.

In one of the biggest mass expulsions in decades, European countries, supported by EU’s border agency Frontex, has systematically pushed back refugees, including children fleeing from wars, in their thousands, using illegal tactics ranging from assault to brutality during detention or transportation.

The Guardian’s analysis is based on reports released by UN agencies, combined with a database of incidents collected by non-governmental organisations. According to charities, with the onset of Covid-19, the regularity and brutality of pushback practices has grown.

“Recent reports suggest an increase of deaths of migrants attempting to reach Europe and, at the same time, an increase of the collaboration between EU countries with non-EU countries such as Libya, which has led to the failure of several rescue operations,’’ said one of Italy’s leading human rights and immigration experts, Fulvio Vassallo Paleologo, professor of asylum law at the University of Palermo. ‘’In this context, deaths at sea since the beginning of the pandemic are directly or indirectly linked to the EU approach aimed at closing all doors to Europe and the increasing externalisation of migration control to countries such as Libya.’’

The findings come as the EU’s anti-fraud watchdog, Olaf, has launched an investigation into Frontex over allegations of harassment, misconduct and unlawful operations aimed at stopping asylum seekers from reaching EU shores.

Since January 2020, despite the drop in numbers, Italy, Malta, Greece, Croatia and Spain have accelerated their hardline migration agenda. Since the introduction of partial or complete border closures to halt the outbreak of coronavirus, these countries have paid non-EU states and enlisted private vessels to intercept boats in distress at sea and push back passengers into detention centres. There have been repeated reports of people being beaten, robbed, stripped naked at frontiers or left at sea.

In 2020 Croatia, whose police patrol the EU’s longest external border, have intensified systemic violence and pushbacks of migrants to Bosnia. The Danish Refugee Council (DRC) recorded nearly 18,000 migrants pushed back by Croatia since the start of the pandemic. Over the last year and a half, the Guardian has collected testimonies of migrants who have allegedly been whipped, robbed, sexually abused and stripped naked by members of the Croatian police. Some migrants said they were spray-painted with red crosses on their heads by officers who said the treatment was the “cure against coronavirus”.

According to an annual report released on Tuesday by the Border Violence Monitoring Network (BVMN), a coalition of 13 NGOs documenting illegal pushbacks in the western Balkans, abuse and disproportionate force was present in nearly 90% of testimonies in 2020 collected from Croatia, a 10% increase on 2019.

In April, the Guardian revealed how a woman from Afghanistan was allegedly sexually abused and held at knifepoint by a Croatian border police officer during a search of migrants on the border with Bosnia.

“Despite the European Commission’s engagement with Croatian authorities in recent months, we have seen virtually no progress, neither on investigations of the actual reports, nor on the development of independent border monitoring mechanisms,” said Nicola Bay, DRC country director for Bosnia. “Every single pushback represents a violation of international and EU law – whether it involves violence or not.”

Since January 2020, Greece has pushed back about 6,230 asylum seekers from its shores, according to data from BVMN. The report stated that in 89% of the pushbacks, “BVMN has observed the disproportionate and excessive use of force. This alarming number shows that the use of force in an abusive, and therefore illicit, way has become a normality […]

“Extremely cruel examples of police violence documented in 2020 included prolonged excessive beatings (often on naked bodies), water immersion, the physical abuse of women and children, the use of metal rods to inflict injury.”

In testimonies, people described how their hands were tied to the bars of cells and helmets put on their heads before beatings to avoid visible bruising.

A lawsuit filed against the Greek state in April at the European court of human rights accused Athens of abandoning dozens of migrants in life rafts at sea, after some had been beaten. The case claims that Greek patrol boats towed migrants back to Turkish waters and abandoned them at sea without food, water, lifejackets or any means to call for help.

BVMN said: “Whether it be using the Covid-19 pandemic and the national lockdown to serve as a cover for pushbacks, fashioning open-air prisons, or preventing boats from entering Greek waters by firing warning shots toward boats, the evidence indicates the persistent refusal to uphold democratic values, human rights and international and European law.”

According to UNHCR data, since the start of the pandemic, Libyan authorities – with Italian support since 2017, when Rome ceded responsibility for overseeing Mediterranean rescue operations to Libya – intercepted and pushed back to Tripoli about 15,500 asylum seekers. The controversial strategy has caused the forced return of thousands to Libyan detention centres where, according to first hand reports, they face torture. Hundreds have drowned when neither Libya nor Italy intervened.

“In 2020 this practice continued, with an increasingly important role being played by Frontex planes, sighting boats at sea and communicating their position to the Libyan coastguard,” said Matteo de Bellis, migration researcher at Amnesty International. “So, while Italy at some point even used the pandemic as an excuse to declare that its ports were not safe for the disembarkation of people rescued at sea, it had no problem with the Libyan coastguard returning people to Tripoli. Even when this was under shelling or when hundreds were forcibly disappeared immediately after disembarkation.”

In April, Italy and Libya were accused of deliberately ignoring a mayday call from a migrant boat in distress in Libyan waters, as waves reached six metres. A few hours later, an NGO rescue boat discovered dozens of bodies floating in the waves. That day 130 migrants were lost at sea.

In April, in a joint investigation with the Italian Rai News and the newspaper Domani, the Guardian saw documents from Italian prosecutors detailing conversations between two commanders of the Libyan coastguard and an Italian coastguard officer in Rome. The transcripts appeared to expose the non-responsive behaviour of the Libyan officers and their struggling to answer the distress calls which resulted in hundreds of deaths. At least five NGO boats remain blocked in Italian ports as authorities claim administrative reasons for holding them.

“Push- and pull-back operations have become routine, as have forms of maritime abandonment where hundreds were left to drown,’’ said a spokesperson at Alarm Phone, a hotline service for migrants in distress at sea. ‘’We have documented so many shipwrecks that were never officially accounted for, and so we know that the real death toll is much higher. In many of the cases, European coastguards have refused to respond – they rather chose to let people drown or to intercept them back to the place they had risked their lives to escape from. Even if all European authorities try to reject responsibility, we know that the mass dying is a direct result of both their actions and inactions. These deaths are on Europe.’’

Malta, which declared its ports closed early last year, citing the pandemic, has continued to push back hundreds of migrants using two strategies: enlisting private vessels to intercept asylum seekers and force them back to Libya or turning them away with directions to Italy.

“Between 2014 and 2017, Malta was able to count on Italy to take responsibility for coordinating rescues and allowing disembarkations,” said De Bellis. “But when Italy and the EU withdrew their ships from the central Mediterranean, to leave it in Libya’s hands, they left Malta more exposed. In response, from early 2020 the Maltese government used tactics to avoid assisting refugees and migrants in danger at sea, including arranging unlawful pushbacks to Libya by private fishing boats, diverting boats rather than rescuing them, illegally detaining hundreds of people on ill-equipped ferries off Malta’s waters, and signing a new agreement with Libya to prevent people from reaching Malta.”

Last May, a series of voice messages obtained by the Guardian confirmed the Maltese government’s strategy to use private vessels, acting at the behest of its armed forces, to intercept crossings and return refugees to Libyan detention centres.

In February 2020, the European court of human rights was accused of “completely ignoring the reality” after it ruled Spain did not violate the prohibition of collective expulsion, as asylum applications could be made at the official border crossing point. Relying on this judgment, Spain’s constitutional court upheld “border rejections” provided certain safeguards apply.

Last week, the bodies of 24 migrants from sub-Saharan Africa were found by Spain’s maritime rescue. They are believed to have died of dehydration while attempting to reach the Canary Islands. In 2020, according to the UNHCR, 788 migrants died trying to reach Spain.

The Guardian has approached Frontex for comment. Previously the agency has said it will be “cooperating fully” with Olaf.