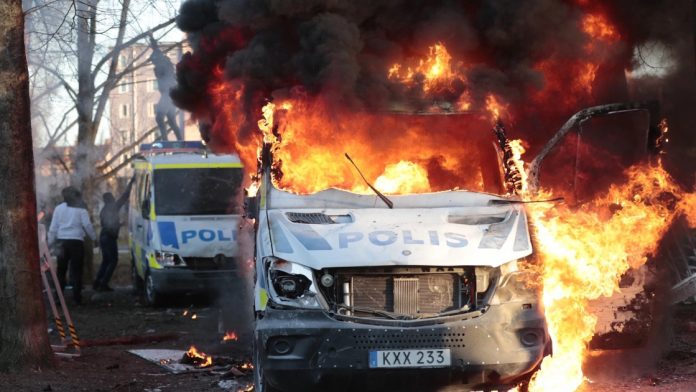 After the most recent outbreaks of violence in Sweden, there was no lack of appeals to tackle the “deeper causes”. The fact remains, however, that milieus have become entrenched there, just like in France or the Netherlands, which have little to do with Western society.

A culture war about religion and freedom of expression began 17 years ago with the Mohammed caricatures in Denmark and continues to the present day. Anyone who thought that things had calmed down will be disabused by the outbreaks of violence in Sweden.

A right-wing extremist announces anti-Islam demonstrations in which the Quran is to be burned, and in several cities, mostly young men, brutally attack police officers. For them, they are hated representatives of a state that allows such “blasphemous” demonstrations. What was striking this time, however, was that children as young as six took part in the violence – along with their parents. The chief prosecutor in Linköping said that while reviewing the video footage, she saw a mother cheering on her son who was throwing stones at police buses. The governments of Malaysia and Iraq are protesting accordingly.

There may be various reasons for this violence. Even now there is no lack of appeals to fight the “deeper causes”, such as unemployment and lack of prospects or depressing housing estates. It may also not always be clear whether the violence has social or cultural roots. According to the Swedish police authority, there are about 60 neighborhoods in Sweden that are classified as “at risk”. These are areas where the population is predominantly immigrant, characterized by low socio-economic status, and where criminal organizations compete with the state for local authority. There, ambulance drivers, firefighters and even journalists run the risk of being attacked.

These neighborhoods are also home to street gangs that account for much of Sweden’s armed gang violence. There are shootings in public and in broad daylight, and even bombings. The number of fatalities in shootings among young men in Sweden is now ten times higher than in Germany.

But the fact remains that in Sweden, as in France or the Netherlands, milieus have become entrenched that have little to do with Western society and whose frustrations lead to outbreaks of violence on comparatively minor occasions. Movements like the Muslim Brotherhood and other, non-violent extremists which try to overthrow Western democracies and universal values together with nationalists, e.g. controlled by Turkish parties can be called key players in this process of radicalization.

Sweden has long had one of the highest youth unemployment rates in Europe. Corona has now made everything even more complicated – especially for immigrants. The rise of the right-wing “Sweden Democrats” is the clearest warning sign for the West in general. 20 years ago, they missed on entering the Swedish Parliament with just 1.5 percent of the vote. Since then, they have gained ground in every election until presently 17.5 percent, in newest polls even higher, before the next elections in September this year.

Swedish governments, whether left-leaning or liberal, have repeatedly claimed that Sweden has thereby proven itself a “humanitarian superpower”. But they have failed to recognize and combat Islamist extremism, gang rule and resentment against Swedish society that is brewing in the immigrant-majority neighborhoods.

The recent events in Sweden should be a warning sign also for other governments in Europe: Missed integration opportunities, the segregation of parts in the society can become a threat for any state, where right-wing nationalists together with their counterparts from the Islamist scene demand the same consequence – segregating the societies in Europe.