The company’s executives and commissioners are officers known for their close ties to Erdogan and their great loyalty to him.

The company was established by 23 retired officers under the command of former Major General Adnan Tanri Verdi. On February 28, 2012, Verdi was assigned as Chairman of the Board and he stayed in that position until August 2016, when he was appointed as a Security Adviser to Erdogan.

He started as the technical director of Sadat since its establishment until March 2013, then he was a member and vice-chairman of the board from since 2013 to July 2016, and finally he became the Chairman of the Board since August 2016 to date.

Melih Tanri Verdi had studied Electrical and Electronics Engineering. He owns two companies working in communications and maintenance, and he is an authorized agent of international companies such as Panasonic, Motorola and Laxon in the Turkish city of Bursa.

Officially he resigned from his post as security advisor to Recep Tayyip Erdogan in January 2020, due to heavy criticism leveled after his statements that his company was paving the way for the emergence of Mahdi. However, the Turkish opposition revealed information, saying that the resignation was just formal. He worked later as Chairman of ASDER, which established the Center for Defenders of Justice for Strategic Studies and was the basis of Sadat International Defense Consulting.

Zafer Yoruk, a Turkish journalist, says that Adnan Tanri Verdi advised Erdogan to move to the presidential system and to restructure the Turkish army.

He worked as General Secretary of the Center for Defenders of Justice for Strategic Studies (ASSAM) http://assam.org.tr/index.php/en/

That center is considered as a reference for Sadat Company and one of the references of Recep Tayyip Erdogan.

Provide financial and military assistance to Hamas, according to Israeli reports in 2018.

Regardless of the company’s business list mentioned on its website, one of its most important activities is the weapon-trade of Turkish arms, especially in the Middle East and Africa. Russian media made public that Sadat has sold weapons to the fighting groups in Tripoli, and between July and September 2019, Sadat shipped about 10,000 tons of weapons and ammunition to Libya, in addition to armored vehicles, rocket launchers, and drones.

The Sadat Company emerged in Libya for the first time in 2013, when Adnan Tanri Verdi visited Libya, where he met Libyan military leaders to determine the needs of Libyan militias affiliated with Turkey.

Sadat was a partner with the Asadullah Force, a Turkish special operations force, to suppress the Kurds in 2015 in southeast Turkey.

According to Michael Rubin, a former US official in the Pentagon, Sadat had also trained ISIS and Al-Nusra fighters, and played the most prominent role in directing the alleged coup d’etat back in July 2016.

Sadat trained about 3,000 Syrian and Libyan personnel in late 2015 and early 2016, before sending them to Syria and Libya.

The Guardians Organization: (The Turkish version of the Iranian Basij)

The Guardians Organization was established in the beginning of 2020 in Turkey.

According to Erdogan and company’s official statements, the company aims to support police forces in maintaining internal security.

Last January, Erdogan said that Turkey could no longer rely on their traditional security forces solely to maintain security in Turkish cities, but according to leaked information, the security and logistical cooperation between Sadat and the Guardians Organization indicate that the Guardians is another security company seeking to cooperate with Sadat to control the Turkish street, where it prepares armed youth forces in support of Erdogan similar to the Iranian Basij group.

Some reports that talked about the number of forces affiliated with the Guardians Organization, say that organization seeks to reach 30 thousand people under the command of Erdogan when necessary.

The difference between Sadat and the Iranian Revolutionary Guards is that Sadat is still in the process of establishment, especially when we consider the 250,000 members already belonging to the IRGC.

The leaders of Sadat have influence over the Turkish army, they can amend its structure and change the positions and its leaders. So, Sadat does not need to build an army since it enjoys the powers of the Turkish army’s leaders.

Sadat and the organizations of HÖH or MSH:

The Popular Special Forces, established in 2016, consist of about 7000 fighters, spread through 22 branches in Turkey, according to the statements of its founder and leader Fateh Kaya.

It has branches in Istanbul and Ankara as well. Fatih Kaya said in an interview, as an organization they would not suppress demonstrations unless they would get the order from the Commander of the Faithful (meaning Erdogan).

In November 2018, the name of the Popular Special Forces HÖH was changed to (MSM) and the organization’s founder, Fatih Kaya, was nominated for membership in the Parliament for the AKP party.

In 2018, the organization raised funds to counter the economic war on Turkey.

Some reports say that Fateh Kaya, before founding the organization, had fought in Syria alongside Turkish forces and he was a leader of a military faction. 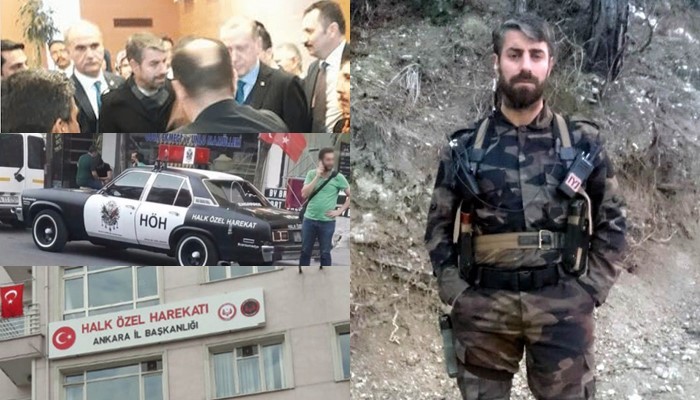 Fateh Kaya, next to Recep Tayyip Erdogan, a photo of the organization’s branch and one of its cars

The company publishes a map of its locations in the world, but the aim of the map is spreading in Islamic countries. It is confirmed that the company is present Syria, Libya, Qatar, Tunisia, Somalia, Ethiopia, Bosnia and Herzegovina and Kosovo, as well as Albania.

There is no evidence or information that the company is active in an EU country, but there is cooperation between the organizations directed by Turkish intelligence in Europe.