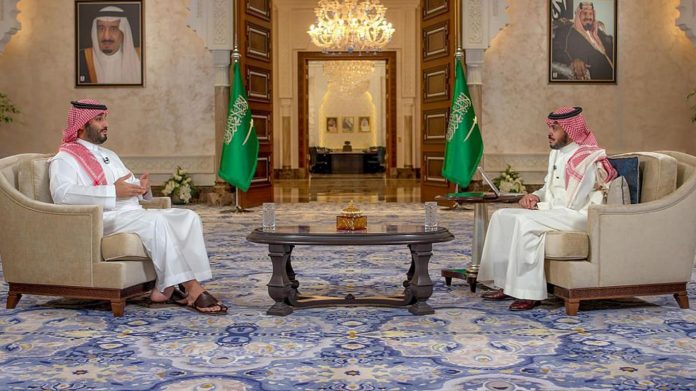 The Saudi Crown Prince Muhammad bin Salman could not do without invoking his own strength. “The word fear does not exist in Saudi dictionaries, because Saudis are not afraid of anything,” said the heir to the throne in a detailed TV interview. But the tone he took on Iran, the major regional rival, was conspicuously conciliatory. “Ultimately, Iran is a neighboring country,” he said. The kingdom does not want any difficulties and is striving for a good relationship with Tehran. “We want it to flourish and grow,” said the Crown Prince, who omitted statements like those of 2018 when he said about the Iranian revolutionary leader Ali Khamenei that Adolf Hitler looked good in comparison. The new mildness in tone matches the reports in recent weeks about new contacts between the two countries. The first thing the Financial Times reported was that representatives of the Sunni regional power Saudi Arabia and the Shiite leading power Iran had met in Baghdad. The Saudi leadership, which broke off diplomatic relations in 2016, denies it, but several diplomatic sources confirm the advances. One focus of the talks was Yemen, says a diplomat, who speaks of a “more constructive tone”. The kingdom is slowly adapting its policies to the new realities.

This includes the failure of Riyadh to expel the Iran-sponsored Yemeni Houthi rebels by military means from the capital Sanaa and other parts of Yemen. After six years, the kingdom is looking for a way out of the conflict. This is difficult to do without Iran’s cooperation, and the Houthi are currently making no move to seek their salvation beyond the battlefield. In recent years, Saudi Arabia has turned down Iranian mediation offers, said Iranian Foreign Minister Jawad Zarif in a conversation that was not actually intended for the public and is currently making waves in Iran. The Iranian President had instructed all ministers to take stock of the end of their term of office in interviews recorded for the state archive. Zarif also said that in 2015 Russia, in cooperation with the Revolutionary Guard, tried to sabotage the negotiations for a nuclear deal in Vienna and prevent a conclusion. The fact that the US under President Joe Biden is currently trying to achieve rapprochement in the nuclear dispute with Iran is another reality to which Saudi Arabia’s policy must adapt.

In Vienna, Washington is in indirect talks with Iran and the five other signatory states of the nuclear agreement on terms of a US re-accession to the agreement from which Donald Trump left in 2018. In Washington, there were reports that CIA Director William Burns had recently traveled to Baghdad to speak in confidence with Iranian representatives in the private home of Iraqi Foreign Minister Fuad Hussein. The US Iran specialist Barbara Slavin reported that there had been a three-person meeting in Baghdad: in addition to the Iranian National Security Advisor Ali Shamchani, William Burns and a representative of Saudi Arabia had attended. The White House did not comment on questions about Burns’ possible secret mission and referred to the CIA. The foreign secret service denied such a meeting.

The Iranian government is interested in better relations with Saudi Arabia for two reasons. Firstly, it tries to prevent the cooperation between Saudi Arabia and Israel from becoming even closer, which would further strengthen the anti-Iranian bloc in the region. That is apparently not the case at the moment. Israel reacted very angrily about the meeting of Saudi and Iranian government representatives in Baghdad at the beginning of April, as it only claims to have been informed about it afterwards. Second, President Hassan Rohani and Zarif hope normalization with Saudi Arabia will strengthen their position in the internal Iranian power struggle. Zarif’s interview now intensifies the duel between the hardliners and the Rouhani government considerably.

Despite the changed tone, there are still enormous differences between Iran and its adversaries. This was also made clear in the interview with the Saudi Crown Prince, who criticized Iran’s “harmful behavior” and, in addition to the nuclear program, named support for “illegal militias” in the region or the Tehran program for ballistic missiles. Biden has made his willingness to lead America back into the agreement dependent, among other things, on Tehran reducing its “destabilizing activities” in the region. It is doubted that Iran will comply with the Saudi and US demands for a change in behavior in the foreseeable future. Talks with Iran, whether in Vienna about the nuclear agreement or in the region with Saudi Arabia, are subject to the proviso that a new president and successor to Rouhani will be elected on June 18. In the nuclear negotiations, the Revolutionary Guard want to prevent an agreement that includes the Iranian missile program and its shadow armies in the region.

After the Zarif interview became public, another incident occurred in the Persian Gulf in which an American naval ship fired warning shots in the direction of three Iranian military boats. The speedboats of the Revolutionary Guard had approached the UA Navy ships USS Firebolt and Baranoff on Monday within 62 meters. When the Iranian forces came even closer despite the warnings over radio and loudspeakers, the USS Firebolt fired warning shots. After that, the speedboats of the Revolutionary Guards would have moved away and moved to a “safe distance”.