The Egyptian doctor, Jamal Al-Minshawi, who was a friends of the leader of Al-Qaeda, Ayman Al-Zawahiri, revealed that Al-Zawahiri asked Iran for $ 100 million in exchange for carrying out operations in Egypt.

He also asserted that Iran had rejected the offer made by Al-Zawahiri due to its uncertainty and confidence in the organization’s ability to launch such operations on Egyptian territory at the time, especially with the Egyptian security alert at the time, in addition to the high amount of the required amount.

It is noteworthy that the US security authorities had announced, during the past few years, the liquidation of a number of leaders of the first row in Al Qaeda, who were present in Iran, at the forefront of which was the son of the former leader of the organization, Hamza bin Laden, whose clips spread A video during his wedding celebration in an Iranian city, according to the US statements.

In the same context, Egyptian security sources indicated that the state of coordination between Al Qaeda and Iran began since the arrival of the former guide of the revolution in Iran, Ali Khomeini, to power in 1979, indicating that relations were managed by the leaders of the MB.

The sources also indicated that the peak of coordination between the two parties was in the mid-1980s, pointing out that a meeting between Brotherhood leaders and Osama bin Laden was monitored in Afghanistan in 1986 with the aim of coordination and exchange of interests.

It also indicated that another meeting was held that brought together Osama bin Laden, the mentor of the Muslim Brotherhood at that time, Muhammad Hamid Abu al-Nasr and his deputy, Mustafa Mashhour, who visited the Afghan Mujahideen camps and announced their support for bin Laden and his companions, according to what was reported by Al-Arabiya Net.

The security sources also pointed out that Al-Zawahiri directed the organization to carry out violent operations in several Arab countries, especially Egypt, Sudan and Yemen, as happened in the 1990s.

In addition, Al-Zawahiri worked to bring a large number of supporters of the jihadist movement in Egypt to Afghanistan to train them in combat operations and send them back to Egypt to launch attacks there, which happened in the nineties in the attempt to assassinate Prime Minister Atef Sidqi and Interior Minister Hassan al-Alfi, and targeting tourists in the Khan Hebron region. 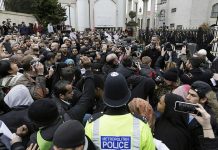