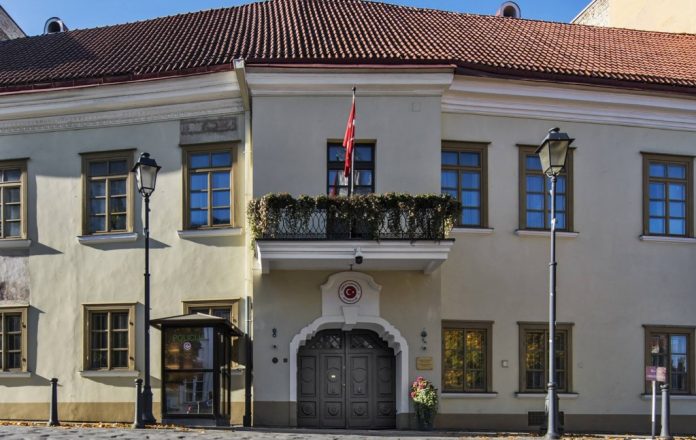 A secret Turkish government report has revealed the extent of nefarious and clandestine espionage activities among the Lithuanian Muslim community by a Turkish imam who operated under diplomatic cover out of the Turkish Embassy.

The classified three-page report, sent by the Turkish Embassy in Vilnius to foreign ministry headquarters in Ankara, detailed how an imam from the Turkish government’s religious arm, the Diyanet, spied on residents and nationals of Lithuania. The report also exposed the Turkish Embassy’s efforts to infiltrate the small Muslim community in the Baltic nation on behalf of a foreign government.

The report, dated February 1, 2017 and stamped secret, was signed by Gülsun Erkul, then-deputy director general of consular affairs in the foreign ministry and currently serving as Turkish ambassador in the Latvian capital of Riga.

Based on the embassy reports she received from Turkish operatives deployed in Lithuania, Ambassador Erkul wrote that 16 people who were seen as affiliated with the Gülen movement, — a group that is critical of Turkish President Recep Tayyip Erdoğan on a range of issues from pervasive corruption to Turkey’s aiding and abetting of jihadist group, — were profiled. She sent the names to the Turkish Intelligence Organization (MIT) as well as the governors offices in 16 provinces where the unsuspecting victims in Lithuania were subjected sham criminal investigations in Turkey.

The report explicitly mentioned how the embassy used the Diyanet-appointed imam as a point man to steer events in the Lithuanian Muslim community while enjoying the cover of a diplomatic attaché. The imam, İbrahim Ceyhan, appointed in May 2014 as an advisor to the embassy, worked in coordination with embassy officials to undermine the influence of Gülen people in the Lithuanian Islamic Culture and Education Center, which was established in 2012. Ceyhan also helped gather intelligence on his opponents in the community and informed on them.

According to the report, the embassy enlisted Bülent Basatemur, a Turk, as an asset in orchestrating a plot to gain leverage over the center and help reshape it as a platform to promote the agenda of Erdoğan’s Justice and Development Party (AKP) government. The plan was to push out Güngör Aydemir, a critic of Erdoğan, from the board of directors. Although Basatemur sided with the embassy in a legal battle as part of of an effort to remove Aydemir from the board, the report stated that the embassy received conflicting reports about Basatemur’s allegiance to President Erdoğan. Nevertheless, it was decided that his name should be excluded from the list that was sent to Turkey because he had helped the Diyanet’s imam, thus sparing Basatemur from criminal investigation in his home country.

Of the 16 people spied on in Lithuania, the report noted that the government cancelled the passports of 12 of them, while the rest had no cancellation in government records. At the time, only two faced legal action back in Turkey. The embassy report, which was distributed to the police and MIT, suggests that they would all be subject to punitive actions in Turkey because of their personal beliefs and critical stance against the political Islamist government of President Erdoğan.

The spying activities by Turkish diplomatic missions on critics on foreign soil was confirmed by Foreign Minister Mevlüt Çavuşoğlu in February, 2020. Çavuşoğlu said Turkish diplomats assigned to embassies and consulates have officially been instructed by the government to conduct such activities abroad. “If you look at the definition of a diplomat, it is clear. … Intelligence gathering is the duty of diplomats,” Çavuşoğlu told Turkish journalists on February 16, 2020 following the Munich Security Conference, adding, “Intelligence gathering and information collection are a fact.”

The profiling of Lithuanian nationals and residents of Turkish origin on false terrorism charges will have far-reaching repercussions. They risk arrest if they travel to Turkey as well as the loss of their assets located there. They could also get stranded in a third country when they travel if the Turkish government manages to get them on the Interpol database.

Although Interpol has been refusing to accept the Turkish government’s requests on Gülenists, stating that they are politically motivated requests and as such violated Interpol’s constitution, there are still few cases where the government was found to have abused Interpol mechanisms. The most notorious example of Turkey’s abuse of the Lost and Stolen Documents/Passports database in the Interpol system took place when NBA star player Enes Kanter, a Turk, was stranded in Romania on such a notice until the US government intervened and freed him before he was deported to Turkey.

People who also have Turkish nationality would be denied consular services such as passport renewal, notary, power of attorney and birth registry offered by the Turkish consulate and embassy in Lithuania. Since they were already flagged by the Turkish Embassy, Turkish intelligence and other government agencies, further surveillance and tracking of their movements is quite possible.

In recent years, some European countries have launched investigations into Turkish imams linked to the Diyanet. In December 2016 Turkey had to recall Yusuf Acar, the religious affairs attaché at the Turkish Embassy in The Hague, after Dutch authorities accused him of gathering intelligence on the Gülen movement. Similarly, Belgian authorities rejected the visa applications of 12 Turkish imams seeking to work in the country in 2017.

The government of the central German state of Hessen recently ended its cooperation with the Turkish-Islamic Union for Religious Affairs (Diyanet İşleri Türk İslam Birliği, or DITIB). “The doubts about the fundamental independence of DITIB from the Turkish government could not be resolved,” said Minister of Culture Alexander Lorz. DITIB, the German branch of the Diyanet and the religious arm of Erdoğan’s Islamist regime, controls imams sent by the Turkish government to European countries.

Erdoğan, incriminated in a major corruption scandal in 2013 that exposed secret kickbacks in money laundering schemes involving Iranian sanctions buster Reza Zarrab, blamed the Gülen movement for the graft investigations into his family members and business and political associates. He branded the group as a terrorist entity although no violent action has ever been associated with it, and launched a major crackdown on the group, jailing and/or purging tens of thousands of government employees, unlawfully seizing their assets, shutting down schools, universities, NGOs, media outlets, hospitals and others that were owned or operated by people associated with the movement.

The Erdoğan government also accused 79-year-old Turkish Muslim scholar Fethullah Gülen, leader of the eponymous movement, who has been living in self-imposed exile in the US since 1999, of attempting to overthrow the government in 2016. Gülen has repeatedly and strongly denied the accusations, and the Erdoğan government has failed to present any evidence linking Gülen to the abortive putsch. The US Department of Justice said the evidence presented by Turkey to secure his extradition would not stand up to US court scrutiny.

Lithuania has been one of many European states that provided asylum for Erdoğan critics, especially Gülenists, who had to flee the Turkish government crackdown on rights and freedoms.

The immunities and privileges of diplomats and consular staff are governed by international conventions. However, diplomats enjoying the privileges and immunities described in the Vienna Convention on Diplomatic Relations are under a duty to respect the laws and regulations of the receiving state and to avoid interfering in its internal affairs as detailed in Article 41. Similarly, consular staff are granted limited privileges and immunities by the Vienna Convention on Consular Affairs, but the host state authorities can start investigations and prosecute any of the personnel if they perpetrate crimes inside or outside the consulate premises according to Article 43 of the convention.

It is clear that Turkish diplomatic missions violate the domestic laws of receiving states and the principles of international law by conducting unlawful information-gathering campaigns and sweeping intelligence operations. Their spy work makes them vulnerable to international or local prosecution in foreign countries.

Against the interpretive sovereignty of Islamists

Diaa Kaddour - 2021-10-25
An aged and renewed war has always raised in dictatorial countries. The fronts of this war have included, on the one hand, the public...

MENA Research and Studies Center - 2021-10-20
The Turkish government is upset: because ten ambassadors, including the German representative, have campaigned for the imprisoned patron of culture Osman Kavala, they have...

Patriarchy and its Impact on Society

Wafaa Alloush - 2021-10-20
The concept of gender equality and the attempts to abolish gender discrimination have become a significant issue in recent times. Voices calling for the...

MENA Research and Studies Center - 2021-10-19
It was "a little civil war," said a Beirut resident on YouTube, living in the heart of the Lebanese capital known for its cafes...