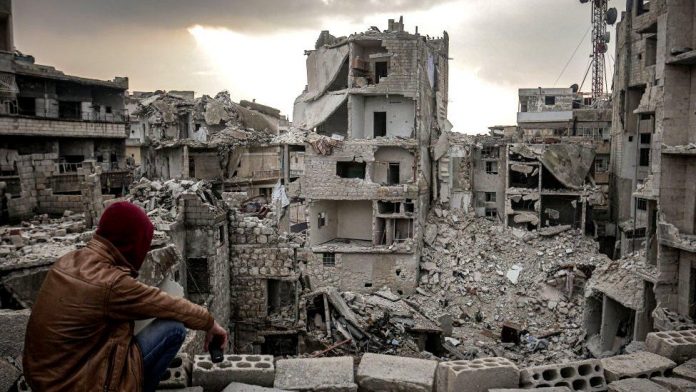 Ten years ago, millions of Syrians went to the streets in Dara‘a, Aleppo and Damascus to demand democracy and respect for their fundamental rights and freedoms. The brutal reaction of the regime led to crimes of the worst proportions over the next decade and one of the worst humanitarian crises since World War II. Over 400,000 deaths and countless human rights violations are the result.

Over half of all Syrians had to leave their homeland. More than six million have fled the country to seek safety from the regime’s atrocities. Tens of thousands were abducted – their families still do not know where they are or what fate has overtaken them.

The Syrian regime has repeatedly used chemical weapons against its own people, as the United Nations and the Organization for the Prohibition of Chemical Weapons (OPCW) have proven beyond doubt. The regime stubbornly refuses to provide information to international investigation teams. However, those who survived his attacks can bear testimony of what they saw and suffered.

We will not be silent in the face of the atrocities that have taken place in Syria, for which the regime and those who support it from outside bear primary responsibility. Many of these crimes, including those committed by the so-called Islamic State and other armed groups, are alleged to be war crimes and crimes against humanity. It is our responsibility to combat impunity and hold those responsible for the crimes committed in Syria accountable, regardless of who they are.

It’s about justice for the victims. Given the gravity of the crimes, we stand by our demand that the International Criminal Court be given the opportunity to investigate the crimes allegedly committed in Syria and to bring charges against the perpetrators. In order to thwart the strategy of those who block the Security Council’s referral to the International Criminal Court, we ensure that the facts are documented until they are examined by the competent courts. We have therefore supported the creation of the UN Evidence Mechanism for Syria, which is used to collect and secure evidence for future trials. This is vital. We also support the work of the Independent International Commission of Inquiry, which documents human rights violations in the Syrian conflict.

These so comprehensively documented human rights violations must finally come to an end. We are determined to enforce all international norms to protect the rights of Syrians, such as the recent initiative by the Netherlands to hold Syria accountable for violating the UN Convention against Torture. Domestic courts, some of which have already started proceedings, play an important role in this. In several of our countries perpetrators have already been prosecuted and convicted with final and absolute judgment. As early as 2016, Swedish courts began prosecuting serious crimes committed in Syria. Last month, a former member of the Syrian secret service was sentenced by the Higher Regional Court in Koblenz to a historic first sentence of aiding and abetting crimes against humanity. Lawsuits are pending in France as well, and a complaint was recently filed in Paris over the Syrian regime’s chemical attacks on its people.

We also need solutions to the tragedy of those detained and the more than 100,000 people who simply disappeared. The United Nations must now devote all its energy to achieving concrete results and receiving information – especially from the Syrian regime.

Combating impunity is not just a matter of principle. It is a moral and political imperative, but it is also of importance for the international community in terms of security policy. The use of chemical weapons, whatever the circumstances, poses a serious threat to world peace and security. We have therefore mobilized all the institutions whose task it is to watch over the ban on chemical weapons. OVCW teams have carried out completely independent investigations. And finally, together with 40 countries and the European Union, we launched the International Partnership against the Impunity of the Use of Chemical Weapons. Thanks to this initiative those involved in the development or use of chemical weapons will be condemned. And we will not rest until they are punished for their crimes.

Ultimately, the fight against impunity is also a basic requirement for lasting peace in Syria. Without a complete, verifiable end to human rights violations and attacks, there is no hope of a good future for Syrians. Without accountability for crimes committed, the country will not be able to reconcile with its past.

We recognize the heroic efforts of human rights defenders, NGO workers and members of civil society. They risk their lives to unearth the truth about the crimes committed in Syria. We protect them wherever possible, and our legal systems work hard to prosecute those responsible for serious crimes.

There must be no blind spots in coming to terms with this decade of atrocities. Justice for victims is essential to rebuilding a stable, peaceful Syria and a credible, viable political solution in accordance with UN Security Council Resolution 2254.

Our countries fight to ensure that those responsible for war crimes and torture do not go unpunished. Their crimes will not prevail over the desire of the Syrian people for dignity and justice.