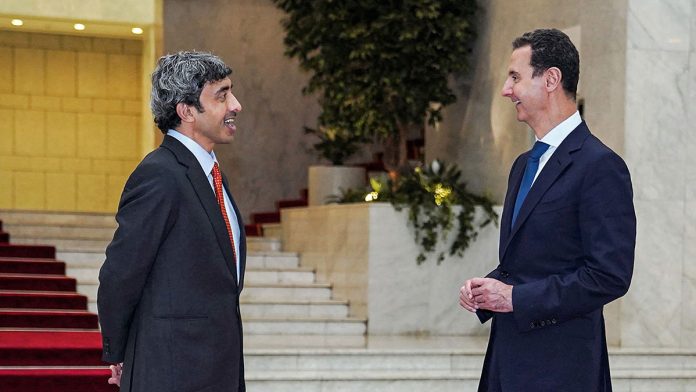 The Syrian dictator Bashar al-Assad seemed to be hard pressed to believe his luck when the Emirati Foreign Minister Sheikh Abdullah bin Zayed al-Nahyan visited him in Damascus this month. It was the highest-ranking visit from the United Arab Emirates (UAE) since the outbreak of the Syrian civil war in 2011. In fact, Assad had nothing to do but wait for rapprochement between his regime and a number of US-allied Arab states.

The Emirates had already reopened their embassy in the Syrian capital in 2018. At that time, it was officially declared that the move also aimed to limit regional interference “in Arab and Syrian affairs” – a reference to Iran’s influential role in a country at war. During this visit, President Assad thanked the UAE for its “correct and objective positions” on Syria. Two days later, a deal was announced that an Emirati consortium would build a 300-megawatt solar power plant near Damascus in the coming years.

Assad actually won the war. The warlord needs investments from abroad to further secure his power, not just for the completely ailing energy sector. After almost eleven years of conflict, Syria is a ruin. Half of the population either fled abroad or were internally displaced, hundreds of thousands of Syrians were killed in the bombing of the regime and the Russian air force, nine out of ten residents live in poverty. The country is still divided, Assad only controls around two thirds of the nation’s territory. A diplomatic solution is a long way off, a lifting of the crippling EU and US sanctions does not seem in sight.

Abu Dhabi’s motivation to seek rapprochement with the autocrats in this situation was already evident three years ago: They do not want to clear the field for the Iranian enemies, the Turkish rivals or even the Russians. “Syria should not be left to its own devices,” says A. Taha, an Emirati analyst, “if the Iranians and the Russians are there, the Arabs should be there too.”

With the fall of the economic centre of Aleppo in 2016 at the latest, the UAE had to realize that the rebel groups they supported had no chance in the fight against Assad’s troops and his allies, especially Russia. The commitment to the Syrian opposition has meanwhile been recorded as a lost investment. In Libya, for example, they are now on the same side as Bashar Al-Assad. Syria and the UAE both support warlord Khalifa Haftar there.

More and more open contacts with the regime also fit in with a time when everyone seems to be talking to everyone in the region. Israel has peace agreements with a number of Arab states, including the UAE. Iran and Saudi Arabia confer in Baghdad, negotiations to resume the nuclear deal with Tehran are also ongoing, albeit very slowly.

All this happens under the impression that the superpower USA is withdrawing further and further from the region or that Joe Biden’s government is at least unwilling to raise any significant political capital in Syria. Last but not least, the rigorous US withdrawal from Afghanistan has shaken Washington’s credibility. After the Emirati minister’s visit to Damascus, a spokesman for the US State Department made clear that the US government is concerned about the meeting and “the signal it sends out”. Efforts to normalize and rehabilitate Bashar al-Assad will not be supported. He is “a brutal dictator” who withholds humanitarian aid from large parts of his population.

It remains to be seen whether the US will apply its strict sanctions regime for Syria to its Arab partners as well. The funds of those who trade with Damascus can be frozen. The Americans themselves recently sowed doubts about their own determination when they agreed to a deal that provides for the delivery of Egyptian gas to Lebanon via Jordan and Syria. This is intended to cushion the collapse of the cedar state and reduce Iran’s influence there. This lucrative deal is one of the reasons why Jordan’s King Abdullah II recently called Assad again after a decade of silence.

Economic interests also motivate Egypt to work for Syria’s reintegration. At the end of October, President al-Sisi spoke out in favor of respect for Syria’s sovereignty with a view to Turkey’s role in northern Syria. His foreign minister later stated that Egypt wanted to help bring “Syria back into the Arab lap”. The Arab League said that Damascus could be resumed at the next meeting of the group if there was a consensus. General Secretary Gheit said: “Many Arab countries want this to happen.” Only the Qatari foreign minister emphasized earlier this week: “Qatar’s position remains as it is. We do not see any serious steps by the Assad regime to repair the self-inflicted damage to its country and people.”

Last week it became public that President Assad had recently pushed through the removal of the Iranian Revolutionary Guard Commander (IRGC) for Syria: IRGC forces had been stationed in places to which the regime had not consented. This step must have been registered in the Gulf and the Nile. “Assad can get a re-entry into the Arab League and rapprochement with neighboring Arab states for a small price,” says the Director of the German “Orient Institut” in Berlin, “but there will only be an end to the sanctions and thus money for reconstruction when there is a political agreement.” Among other things, this requires a new Syrian constitution, which is not in sight in the current UN process.