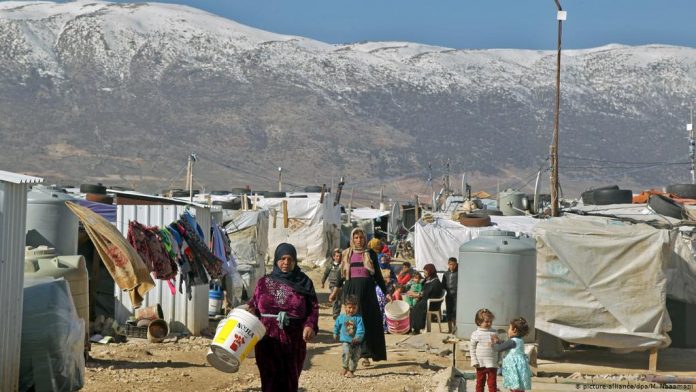 More than five and a half million Syrians have fled to neighboring countries such as Lebanon, Turkey and Jordan. The chance of a dignified and safe return to their home country is almost zero. The regime of Bashar al Assad has protected its rule and has no interest in a massive return of the refugees. Syria has been destroyed and squeezed out. Returnees would be an additional burden, and they are viewed as traitors by the regime anyway. Again and again they are forcibly recruited into the armed forces or disappear into the clutches of the brutal secret services.

At the same time, the situation of refugees in the host countries is getting worse. Turkey is struggling with the economic crisis and the corona pandemic, as is Jordan. Nowhere is the situation as dire as in Lebanon, where more than two and a half million refugees live. The state is bankrupt, the value of the national currency is in free fall, the power supply is sporadic at best, there is a dramatic shortage of fuel and medicines.

In the past few days the decline in the national currency, the most painful symptom, has accelerated again. The loss of purchasing power hits the Syrian refugees hard, the cash aid, for example from the UN organizations, is paid out in Lebanese pounds. “The vast majority of Syrian refugees are struggling to survive,” says a UNHCR spokeswoman. “Problems like child labor and child marriage have gotten much worse. Also the insecure supply of food.” There are already families who are forced to skip meals or to cut down drastically. “The refugees can thank God that they survive.”

With the help that refugees can get, they can pay the electricity bill and the rent on which their tent stands, which will soon be increased again. Maybe there’s still money left for some groceries. Refugees who might find a job earn 30,000 Lebanese pounds a day. According to the official exchange rate, that’s USD 20, and one and a half at the black market rate: It makes a difference if bread costs £ 7,000 instead of £ 4,000. And there are supermarkets that no longer sell government-subsidized food, such as bread, to Syrians. Because there has long been desperate competition between the refugees and the poorer Lebanese, who are equally suffering from the economic crisis. This also explains the hostility that refugees repeatedly report. In Saadnayel there are around 30,000 Syrians for every 15,000 inhabitants, as reported by the city’s mayor. He also complains that the refugees are putting additional strain on the troubled infrastructure, exacerbating the water shortage or doubling the rubbish. But he also sees the money that comes into the place with international aid. “Of course, hostility is growing here too,” he says. “But I always try to highlight the benefits.” The populist slogans of some of the country’s leaders don’t make it any easier for him. They want to make the Syrians scapegoats – above all the former foreign minister and presidential son-in-law Gebran Bassil, who is considered one of those whose greed and unscrupulousness has ruined Lebanon. The complaint about the burden of the refugees is part of the basic political vocabulary in the Lebanese capital.

While the Lebanese authorities have steadily increased – and continue to increase – the pressure on Syrians to leave the country in recent years, the integration of Syrian refugees in Turkey had been encouragingly positive until the beginning of the corona pandemic. Of the more than 4 million Syrians, only 60,000 are still living in camps, a large number had found work and more than 700,000 children and young people were enrolled in school. The Turkish government guaranteed (and continues to guarantee) free access to education and free health care, and it also makes it easier to take up employment.

Today, however, there is a risk that the achievements of recent years will be lost again due to the economic and pandemic situation, fears the UNHCR office in Ankara. Many refugees have lost their jobs, several hundred thousand children no longer go to school because they have to contribute to the family income, and mental disorders are on the rise.

The Turkish government is trying to absorb some of the consequences. It distributes protective masks free of charge to the refugees, the tests are also free of charge, and the same criteria apply to the vaccination program as to Turkish citizens. However, the refugees are forced to “take desperate measures to survive,” the UNHCR describes. They eat less and less, they get into debt and they take the children out of school.

With the support of the international community, the Turkish government is counteracting this as far as it can. The Ministry of Education has set up support centers nationwide to enable families who do not have internet access or computers to have their children follow online lessons. The most important actors to enable the refugees to live independently and to develop new incomes, however, are still the Turkish city administrations. The UNHCR announced that they have increased their efforts since the beginning of the pandemic.

“We react to the new needs as a result of the pandemic,” the UNHCR says. However, the international community must now also increase its aid, the UN organization appeals, in order to enable the refugees to live in safety and dignity and to alleviate the pressure on the host nations. Last year, donor countries only financed half of the 3RP program for Syrian refugees run by the two UN organizations UNHCR and UNDP. The EU is preparing a commitment for a further 3.5 billion euros for the refugees in Turkey. A new refugee agreement with Turkey is still pending.

In Turkey, the UNHCR and its local partners are expanding online programs for advanced training and language courses for refugees. In addition to the EU-supported ESSN emergency fund, which pays small amounts of cash to particularly needy refugee families, the UNHCR has set up a new emergency program that makes one-off payments of around 100 euros to families in need that are not covered by the ESSN. The EU is also funding a program that pays small amounts of money to families in need when a child regularly attends school.

The money that is made available from abroad for the Arab host countries is also an important issue in Jordan. Interior Minister Mazen Faraya complained last month that only four percent of the aid money needed for Syrian refugees in 2021 has been paid out. According to official Jordanian figures, there are more than 1.36 million, according to UNHCR figures, 660,000 Syrians have registered as refugees. In any case, the kingdom is keen to emphasize that refugees are treated well in Jordan. They are covered by the authorities’ vaccination program, and the government has issued work permits to tens of thousands of refugees, although most of them have a strict quota system.

Jordan can use the financial support. The situation is not as dramatic as in Lebanon, but the kingdom has also been suffering from major economic problems for years. Budget support from Saudi Arabia has declined, and the corona pandemic with its tough curfews has exacerbated the crisis again. The official unemployment rate in Jordan is around twenty percent, the number of unreported cases is considered higher. The economic pressure on the Syrians is increasingly noticeable. For the 17 percent of them who live in the large refugee camps – and thus on international aid – this is less of a problem. But the 83 percent, who often have informal work in Jordanian cities and are not always registered, have been hit hard by the crisis. Last but not least, they suffer from the rise in prices while their income falls.

The fact that the step home is very difficult is already shown by the figure quoted by Interior Minister Faraya in the state media last month: since the reopening of the border with Syria in 2018, no more than fifty thousand refugees have returned. The refugees in Jordan – like in Lebanon or Turkey – cannot and should not stay forever. “Even after eleven years in Jordan, the country is only seen as a transition station for many Syrian refugees. You have to go, but nobody knows how and when,” a UN report is quoting a Jordan official. Home Secretary Faraya said “voluntary return is the best solution to any refugee crisis”.