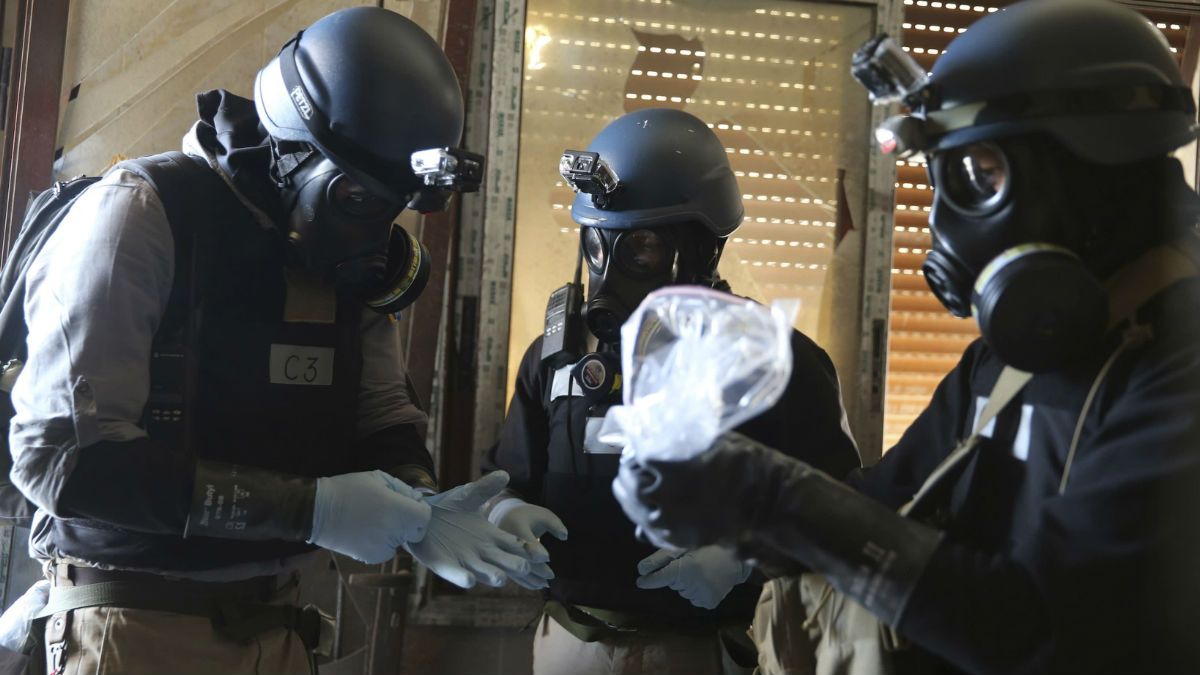 Now it is official: the Syrian dictator Bashar al-Assad used poison gas in the war against his own people. In its first investigative report, the Organization for the Prohibition of Chemical Weapons (OPCW) found that Syrian government forces used chemical weapons in March 2017. The OPCW is not an interest-led association, but the international organization in The Hague, implementing the 1997 chemical weapons agreement. 193 countries in the world have joined. On their behalf, the OPCW investigators now concluded that Bashar al-Assad’s troops dropped chlorine gas and sarin at the city of Al-Lataminah near Hama in March 2017, which at that time was controlled by opposition militias.

How often have the Syrian poison gas operations been denied! Russia launched the propaganda machine after every Assad chemical attack, providing the world with “alternative” facts and many versions of who could be behind it (the opposition, the Americans, NATO?). Russian military officers prevented international investigators from collecting traces on time. Iran accused the rebels and of course the Arab enemies in Saudi Arabia and the United Arab Emirates. But in the German media, too, Assad was reflexively defended by influential journalists and critics of America when using poison gas. There were many entries in the comment columns of online media that Assad protected against any accusation – and instead accused the West.

Let’s look at the facts presented in the OPCW report. According to the findings of the investigators, a Syrian military aircraft from Russian production, which belonged to the 22nd division of the Syrian Air Force, flew over the northern Syrian city of Al-Lataminah at 6 a.m. on March 24, 2017. The Sukhoi machine bombarded its target with Sarin.

At 3:00 p.m. on March 25, 2017, a Syrian Air Force helicopter dropped a chlorine-filled barrel bomb over the Al Lataminah hospital.

At 6 a.m. on March 30, 2017, a Russian Sukhoi aircraft of the Syrian Air Force dropped a Sarin bomb over the south of the city. The residues of sarin and chlorine gas, the OPCW says, are identical to the “chemical profiles” of the Syrian regime’s stocks.

The use of these chemicals and the bombing of hospitals are crimes under international law. Such attacks could “only be based on orders from the higher command level of the Syrian military,” said OPCW investigator coordinator Santiago Oñate Laborde. The dictator Assad, his regime and his supporters from Russia and Iran have been guilty of many crimes in the now almost nine-year war. That is why the German Foreign Minister Heiko Maas this week called on the international community to ensure that those “responsible” must be held accountable. But how?

In the UN Security Council, veto power Russia blocks any resolution that could harm Assad. Russia has meanwhile tried to enforce that the OPCW may determine the use of poison gas, but not the origin. Russia and Iran militarily secure Assad’s victory over their own people. One of the last islands of the opposition and various Islamist brigades is the northwest Syrian city of Idlib, overcrowded with refugees and encircled by Assad’s militias. Around a million refugees are waiting at the border to Turkey, which has built a wall.

Bashar al-Assad can still feel safe. That is why, at the present time, nothing else than investigator passion helps. The OPCW will continue to investigate numerous other poison gas attacks in Syria. The UN and other non-governmental organizations collect evidence of human rights crimes in Syria. The Koblenz Higher Regional Court will open the trial against a former torturer at the end of April. If the dictator Assad and his henchmen ever leave the incredible luck of the criminal, then the investigators will be well prepared.