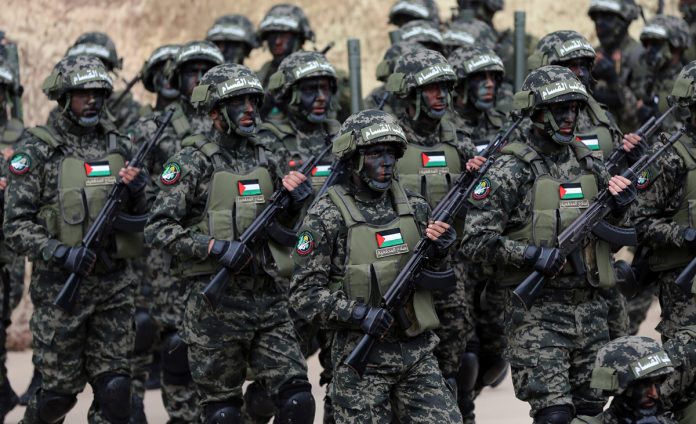 After the short war, Ismail Haniyeh thanked the supporters on behalf of Hamas. “I cannot thank those who provided money and weapons to the brave resistance,” said the Hamas leader on TV: “The Islamic Republic of Iran, which did not hold back with money, weapons and technical assistance.” It took several days for the authorities in Iran to comment on the conflict between Hamas, classified as a terrorist group in the West, and Israel. Some say that Tehran did not want to endanger the Vienna nuclear negotiations. As with the Gaza wars of 2012 and 2014, Hamas probably launched its rocket attacks on Israel this time too, probably of its own accord.

Shiite Iran has been supporting the Sunni Palestinian Islamists for many years. It is an alliance of convenience directed against Israel. “Ninety percent of the military know-how of Hamas and the ‘Palestinian Islamic Jihad’ comes from Iran,” says a senior Israeli officer. This feeds fears that Hamas could become another extended arm of Iran. But there are also many arguments against it.

Iran would like to integrate Hamas more closely into the axis of those forces that call for the destruction of Israel – and disguise that as “resistance”. In mid-May, the commander of the Iranian Al-Quds Brigade, Esmail Ghaani, phoned Haniyeh and assured him that he would continue to support him. The Al-Quds Brigade is the elite unit of the Revolutionary Guard, responsible for the army of deputies that Tehran has built in the region. Around the same time, Naim Kassem, number two in Lebanese Iran-led Hezbollah, had visited Hamas’ offices in Beirut to assure them that the “resistance” was firmly on their side.

This announcement was followed by little during the fighting with Israel. Hezbollah and Iran watched as Hamas tested Israeli defenses with their missiles and as Israel responded with air strikes. Both of these should have given the Iranian-Shiite “axis” gains in knowledge.

But Hamas itself does not belong directly to this axis and does not want to become part of it. The head of Hamas in the Gaza Strip, Jahja Sinwar, said that he thanked Iran “for the military aid and military expertise. Iran is the greatest financial and military supporter of the Qassam Brigades,” referring to the military arm of Hamas. Regarding the organization’s finances as a whole, he claimed that there are “comfortable sources” “that support our activities – this is Iran, but there are also Arab and Muslim supporters and individuals”. Nevertheless, “no one who helps us will ever be able to set a condition that we become part of an equation that is led or dominated by them”. Iran helps out of “religious obligation”.

Indeed, Iran is promoting regional actors more as part of its deterrent strategy against Israel and other forces in the Middle East, while Hamas is concerned with ending the Israeli “occupation.” A Hamas spokesman affirmed that it was a national “liberation movement” and not part of the Sunni-Shiite conflict. “We look forward to any help for our struggle, be it economic, military or political, whether it comes from Iran, Turkey, Qatar or Egypt.” But Hamas attaches importance to “not being part of a coalition”. If Saudi Arabia offered help, “then we would not hesitate a day and thank you for it,” said the spokesman.

“Hamas is betting on several horses,” says Adnan Abu Amer, a professor of politics in Gaza. While money is coming from Qatar, Turkey is providing media support and Egypt is providing diplomatic assistance, the military connection with Iran is closest. He mentions Tehran’s financial support of ten million dollars a year. Hamas fighters receive military training in Iran, they travel there via Egypt and Lebanon. In the past, military equipment had reached Gaza via the tunnels from Egypt and across the Red Sea via Yemen and Sudan. But these accesses through Cairo and Israel are now largely blocked. That is why Hamas has started to manufacture its rockets itself with Iranian help – and is doing this increasingly professionally, according to Israeli sources.

Beyond the alliance of convenience between Gaza and Tehran, there are a number of reasons why Hamas may shy away from falling too deeply into the clutches of the Iranian Revolutionary Guard. It starts with the emotional worlds of your own clientele. Most of the Palestinians are not close to Iran. Hamas supports Sunni groups in Iraq, says Abu Amer, and has also condemned the attacks by the Iran-sponsored Shiite Houthi militia in Yemen against Saudi Arabia.

When the picture of the former commander of the Iranian Al-Quds unit, Qassem Soleimani, was displayed on a billboard in Gaza earlier this year to commemorate the anniversary of his killing, it was promptly torn down. Already after Soleimani was killed in January 2020, Tehran asked Hamas to designate him as a “martyr of Al-Quds (Jerusalem),” says Abu Amer. Politburo chief Haniyeh complied. This sparked heated debates within Hamas. Soleimani also stands for bloodbaths that Shiite militiamen wrought on Sunni Syrians under his command.

In the course of the uprising against Bashar al-Assad in Syria, for example, there was a rupture: In 2012, Hamas relocated its Politburo from Damascus to Qatar. It sided with opponents of the Iran-backed Syrian regime. Traditionally one of these is the Muslim Brotherhood, brutally persecuted by Assad, from which the Palestinian Hamas once emerged. Iran then cut its aid. Now it seems they try to approach again. Hezbollah leader Hassan Nasrallah recently praised the “positive atmosphere” between his organization and Hamas. Relations between Palestinian Islamists and the Syrian regime would also be restored. “But it won’t be easy.”

In the extremist camp, Hamas’s market value rose in the wake of the short war with Israel. In mid-May, Iraqi militia who were loyal to Iran, Harakat Hizbullah al-Nujaba, distributed pictures of a meeting at which their leader Akram al-Kaabi was present, as well as Hamas political bureau chief Haniyeh and the head of the Al-Quds brigade Ghaani. The recordings were apparently months old. Now others want to take over Hamas for themselves and their propaganda. Videos are circulating claiming that Iraqi militiamen are preparing to fight alongside their “Palestinian brothers”. The Hamas spokesman categorically rejects this. “There is not a single Shiite fighter in the Gaza Strip.” Money and arms aid are gladly accepted in Gaza. But you don’t accept any conditions.