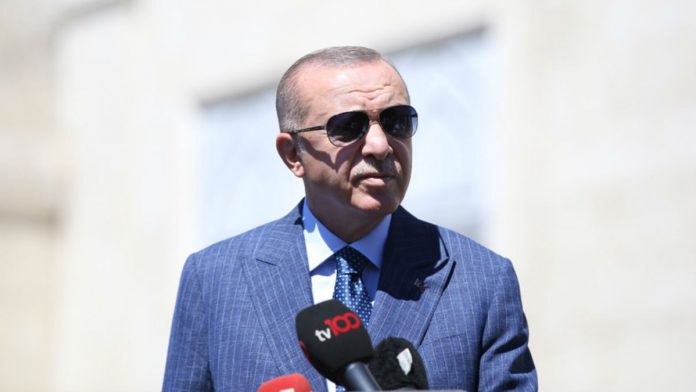 Tension between Turkey and the United Arab Emirates (UAE), former allies-turned-foes over open support for the Muslim Brotherhood by the pro-Iran government of President Recep Tayyip Erdoğan, reached a new level in August as the two countries step up the regional power struggle by maneuvering to confront retaliatory moves.

Turkey has sought an Interpol Red Notice for Mohammad Dahlan, the former leader of the Palestinian faction Fatah in the besieged Gaza Strip, at a time when the UAE has become the first Gulf Arab country to reach a deal on normalizing relations with Israel. The UAE and Israel have reached an agreement — brokered by the United States — to work towards a “full normalization of relations.”

The Ankara Chief Public Prosecutor’s Office asked Interpol to arrest Dahlan, who lives in exile in the UAE, for running an alleged UAE espionage network in Turkey, putting him on the country’s most wanted list, the Sabah daily, owned by the family of the Turkish president, reported. Dahlan is a security advisor to UAE Crown Prince Mohamed Bin Zayed, who announced the normalization of ties with Israel last week.

Zaki Y. M. Hasan and Samer Shaban were arrested on April 19, 2019 in line with the investigation into “Dahlan’s network” in Turkey, Sabah said. According to Sabah, a secret witness called Poyraz said Hasan and Shaban were in contact with Dahlan and spied on Egyptians and Palestinians in Turkey for Dahlan. The use of secret witnesses is the most abused aspect of the criminal justice system by the government in Turkey, especially in political cases, where evidence is often lacking. Hasan, a 56-year-old Palestinian, was found dead under suspicious circumstances in the notorious Silivri Prison on the outskirts of Istanbul nine days after his arrest.

The UAE responded by revealing its plan to conduct joint air military exercises with Greece this week with the participation of F-16 fighter jets. The UAE aircraft arrived on the island of Crete yesterday, according to the reports. The move came as tensions continued to simmer between Greece and neighboring Turkey over offshore energy rights.

Turkey’s government-controlled media as well as Turkish officials have regularly claimed that Dahlan is an agent working for the UAE, Israel and Egypt, played a significant role in the murder of Saudi journalist Jamal Khashoggi in the Saudi Consulate General in Istanbul and was involved in an abortive coup in Turkey on July 15, 2016. No evidence has so far been presented to the public to support these claims.

Hasan, one of the two detainees held by Turkey in April 2019 on suspicion of spying for the UAE, was found hanged from the bathroom door of his cell in Silivri Prison when guards came to distribute food on a Sunday morning, a justice ministry official said at the time. Hassan’s family, however, accused Turkish authorities of killing him. His son Yusuf told Al Arabiya that an international commission should investigate his father’s death. “My father traveled to Turkey to make a living, to build us a future,” Yusuf told Al Arabiya. He added that his father was a victim and “a scapegoat in a political conflict.”

International human right organizations have reported in recent years that there has been an increase in the number of suspicious deaths in Turkey, most in prisons and detention centers, where torture and ill treatment are practiced. In a majority of cases authorities ruled them as suicides without any effective, independent investigation.

President Erdoğan said on August 14 that Turkey was considering closing its embassy in Abu Dhabi and suspending diplomatic ties with the UAE over its decision to normalize relations with Israel.

“I gave an order to the foreign minister. I said we could suspend diplomatic relations with the Abu Dhabi administration or withdraw our ambassador because we stand with the Palestinian people,” he told reporters.

Turkish Defense Minister Hulusi Akar threatened to hold the UAE accountable, saying Abu Dhabi was committing acts that harmed Turkey’s interests in Libya and Syria. “Abu Dhabi does what it does in Libya, does what it does in Syria. All of it is being recorded. At the right place and time, accounts will be settled,” said in an interview with Qatari TV station Al Jazeera on July 31.

Two weeks after Akar’s remarks, Turkish Foreign Minister Mevlüt Çavuşoğlu accused the UAE of “betraying the Palestinian cause for its own interests.” Speaking at a press conference in Switzerland on August 14, he stressed that the UAE betrayed Palestine, saying: “It is a country that puts pressure on some Arab countries regarding Palestine. We say clearly that it betrayed the Palestinian cause for its interests.”

In May Çavuşoğlu responded to criticism of Turkey’s role in the Libyan conflict shortly after a declaration by Cyprus, Egypt, France, Greece and the UAE that described Turkish military activity in the eastern Mediterranean and Libya as seeking “regional chaos and instability.”

He accused the UAE of bringing chaos to the Middle East through its interventions in Libya and Yemen and of supporting al-Qaeda-linked Al-Shabab militants in Somalia, where Turkey maintains a military base and is training Somali security forces.

“If you are asking who is destabilizing this region, who is bringing chaos, then we would say Abu Dhabi without any hesitation. It is a reality that they are the force that unsettled Libya and destroyed Yemen,” Çavuşoğlu said.

The UAE is particularly uncomfortable with Turkey’s support for Qatar and the Muslim Brotherhood. The critical watershed moment in Turkish-UAE relations came in June 2017, when the UAE, Saudi Arabia, Egypt and Bahrain severed diplomatic ties with Qatar and took a number of punitive measures against the emirate, including imposing a total blockade.

The countries accused Qatar of supporting the Muslim Brotherhood along with several other militant Islamist groups in the region. Turkey then came to the aid of Qatar, transporting goods there that had been disrupted by the Saudi Arabia-imposed sanctions. Since then the rhetoric between Turkey and the UAE has become increasingly bitter.