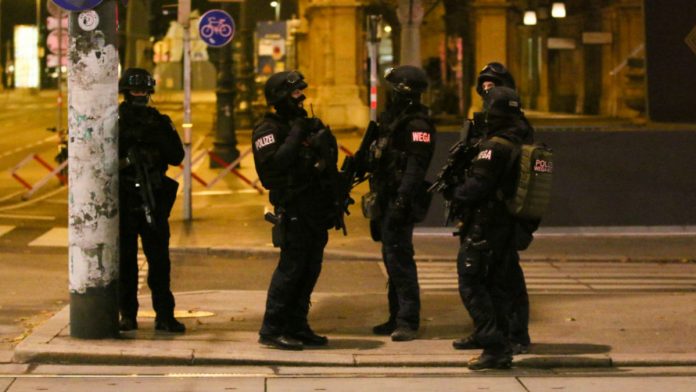 Many say that the Balkans begin in Vienna: languages ​​from the Balkan can be heard everywhere. After Germans, migrants from Romania make up the largest group of foreign nationals in Austria. They are followed by immigrants from Serbia, only then come Turks, followed by Bosnians. Croatians, Bulgarians and Macedonians also form large communities. Around half a million immigrants with citizenship of a Balkan country are registered in Austria. Almost a quarter of the total population has a migration background. The largest group comes from south-east Europe. This also means a high proportion of Muslim immigration.

In Kosovo, Albania and, for some years now, Bosnia as well, the majority of the population is formally Muslim as a late result of Ottoman rule. There are strong Muslim minorities in North Macedonia and Bulgaria, but also in Montenegro and Serbia.

The attacker on Monday was a native of Vienna, whose parents belonged to such a minority: They came to Austria as Albanians from North Macedonia. Albanians make up about a quarter of the population of North Macedonia. Most of them are Muslim.

The Islam practiced in the Balkans is traditionally considered to be relatively liberal. However, this statement can no longer be made unreservedly. Because a minority of young Muslims in the Balkans has radicalized. A trend towards this can be observed for more than a decade. This has also repercussions for Austria, because the communities from the Balkans living there are mostly in close contact with the countries of origin of the parents or grandparents. Many people spend their summer holidays back home together with their families. Weddings are also traditionally celebrated in the countries of origin – even if the bride and groom are no longer born there. This summer, the high number of corona infections among holidaymakers returning from the Balkans also showed how close the connections are.

In turn, radicalized Muslims in the Balkans have close contact with Islamist movements in Syria and other parts of the world. Noticeably many young Muslims traveled from the Balkans to Syria as jihadists. Many perished there, while returnees pose great challenges for the states in the region.

However, the radicalization of the perpetrator in Vienna may also have taken place in Austria, without any connection to North Macedonia. Details are initially not available yet. It is known, however, that Austria also has a problem with Islamist threats. The constitution protection report for 2018 states: “For Austria, the greatest threat continues to come from Islamist extremism and terrorism.”

As early as 2017, the authorities counted more than 300 people who had moved to Syria or Iraq as jihadists. The number of Islamist threats remaining in Austria was estimated at around a thousand. In this dangerous milieu, Muslims with a Balkan or Russian migration background (Chechens) are often the focus. In 2018, Mirsad Omerovic, an Islamist hate preacher from the Muslim minority in Serbia, who came to Austria via Bosnia, was sentenced to twenty years in prison. The court considered it proven that he had incited young people in Austria to join the “Islamic State” (IS).

Four years earlier, the case of two Viennese girls with Bosnian roots, referred to as “jihad brides” by the local tabloid media had caused a stir. The two minors had traveled to Syria via Turkey. According to Austrian media, they wrote in farewell letters: “We are going to Syria, we are fighting for Islam. See you in paradise.”

In 2015, security authorities reported that every second terrorist who traveled to Syria from Austria came from the Chechen community living in the country. At that time, according to the Interior Ministry in Vienna, 170 people had already gone into jihad – compared to the population, up to three times as many as in Germany. The number of terrorists who traveled to Syria is even higher in North Macedonia.

According to the authorities, there were around a hundred in 2016 – while the country has barely two million inhabitants, of whom at most a third are of Islamic faith. According to the Macedonian police, radicalization often takes place via irregular mosques or the Internet. Macedonian security authorities have been complaining for years that there is a lack of personnel and resources to systematically monitor the Islamist milieu, especially those returning from terrorism and their environment.

With regard to the terrorist attack, Austrian Chancellor Sebastian Kurz said on Tuesday that it was not about a conflict between Christians and Muslims or Austrians and migrants, but about a “battle between the many people who believe in peace and those few who who want war”. However, this statement does not release the Austrian state from its responsibility to monitor radicalizations in Muslim migrant milieus more closely. The Austrian journalist Florian Klenk, who was one of the first to be at the crime scene on Monday, names pressing questions on Twitter: “Why was it possible for a well-known Islamist with a criminal record to contact IS? Where and how could he get the weapons?”