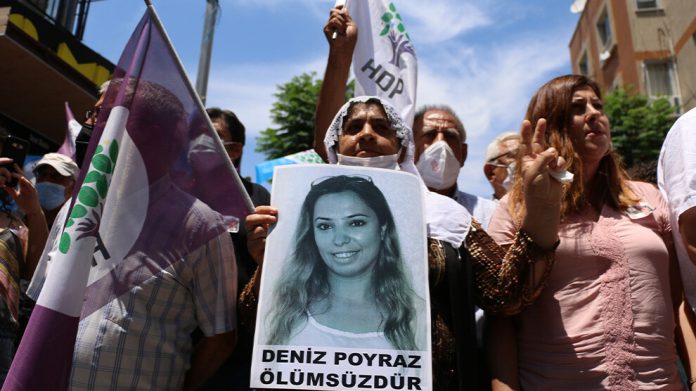 There are more questions than answers: Was it the act of a disturbed loner or a political plot? Is there a connection between the murder of the 38-year-old Kurdish activist in the party office of the HDP and the possible ban against the second largest opposition party in Turkey? And finally: Is the bloody deed in Izmir at the beginning of a new spiral of political violence, as Turkey has experienced on various occasions in its turbulent recent history?

Questions to which there are no conclusive answers at the moment

What is known: On June 17, a heavily armed man who publicly professes the ultra-nationalism of the Turkish right-wing stormed the party office, which is guarded by the police, and kills Deniz Poyraz. After the bloody act, the confessed killer publishes a photo of the victim via WhatsApp with the macabre addition: »Corpse 1«.

This suggests that the killer had a larger target audience in his sights. In fact, on that Thursday morning, a major party meeting was supposed to take place in the premises of the branch, which was postponed at short notice, so that coincidence prevented a possible mass murder.

Details from the attacker’s biography are also known. According to this, he is said to have been a member of a mercenary force in Syria controlled by Ankara. In the social networks there were pictures of the man raising his hand in the so-called wolf salute, the identification mark of the right-wing extremist “gray wolves”. This group is an integral part of the political network of the ultra-nationalist MHP party. The party in turn is government partner of Erdoğan’s AKP and increasingly the most important pillar in his political struggle for survival.

What is conspicuous – and of relevance in a political assessment – is the timing of the crime. The fatal attack on the party office coincides with the Turkish constitutional court’s motion to ban the pro-Kurdish opposition party. On more than 800 pages the indictment accuses the party, among other things, of separatism. President Erdoğan, and above all his political ally from the MHP, Devlet Bahceli, never tired of calling the “People’s Democratic Party” (HDP) an extension of the PKK, which in Turkey, Europe and the US defined as a terrorist organization.

The Supreme Court, which after the most recent constitutional amendments should by no means be granted independence in the sense of the separation of powers, is now starting its deliberations on an indictment aimed at a permanent ban on the party and a multi-year ban on politics for around 500 HDP officials.

Attempts to marginalize the pro-Kurdish party, ultimately to neutralize it, are not new. With the official application for a ban, they have now reached a legal climax. The party has been under pressure for years, legal proceedings are pending against thousands of its members, and the government has removed numerous elected incumbents from their posts and replaced them with Erdoğan loyalists. The most prominent – also internationally known – victims of a politicized judiciary are the former co-chairmen Selahattin Demirtaş and Figen Yuksekdağ, who have been behind bars since 2016.

The campaign against the HDP largely follows a power-political calculation and only secondarily an anti-Kurdish reflex. In the dispute over votes and seats, which, despite all of Erdoğan’s illiberalism, remains the guiding principle in Turkish domestic politics, the HDP tips the scales. Without the support (and votes) of the pro-Kurdish party, the main opposition party, the CHP, would not have been able to oust the AKP from the city halls of Istanbul and Ankara in the 2019 local elections.

This triumph of Erdoğan’s opponents continues to have a political impact today. The sensational setback in the metropolises has led the ruling party’s strategic planners to realize that the neutralization of the HDP is a prerequisite for maintaining power in the next elections (probably 2023). The attitude of the HDP is also a key question, if not the decisive one, for the planning of the opposition. A look at the tables of the opinion polls shows that the only chance the opposition parties have to defeat the bloc of Erdoğan supporters is to close ranks with the HDP.

The bloody act in Izmir should therefore be assessed against this – further – background and not be limited to petty criminals. Rusen Cakir from the online portal Medyascope contradicts the thesis of the act of a disturbed individual perpetrator. The journalist refers to the revelations of the escaped Mafia boss Sedat Peker, whose YouTube monologues with explosive references to alleged entanglements between the government, the underworld and right-wing extremists make people in Turkey sit up and take notice. “You want to convince us that it was an isolated act and that the perpetrator was insane.”

In reality, according to Cakir, the government is trying to create tension. The journalist is not alone in making this assumption. In circles critical of the government, the thesis is widespread that Erdoğan is fueling instability and insecurity in order to be re-elected as the guarantor of a secure future.

Whether this will work out depends on various factors, not least on the question of whether the opposition will succeed in creating a unified anti-Erdoğan front. The murder of Deniz Poyraz has brought the Kurdish question back into the limelight of Turkish domestic politics.