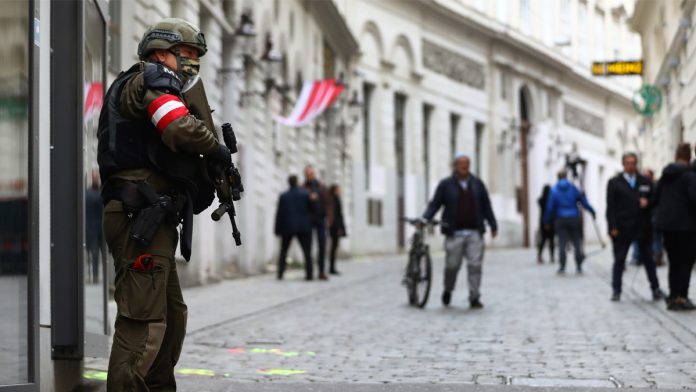 The Austrian government – in the middle of the corona crisis and facing hard public attacks concerning the terror attack in the centre of Vienna back in November 2020 – tried again and again to close mosques – and failed. The lack of legal ways is probably not the only reason for this political inconsequence.

Shortly after the Vienna terrorist attack, the Austrian Misnister of Integration together with the Minister of the Interior, both members of the conservative ÖVP underlined in a press conference that they would close the two mosques, in which, according to information from the Vienna security authorities, the attacker had been radicalized.

It was not the first time in Austria that mosque closings were announced publicly: When photos of children playing war in an Atib mosque in a district of Vienna became public three years ago, a preaching centre controlled by the Turkish religious authority, the Austrian government announced a strike against so-called “political Islam”: Seven mosques, including one related to the right-wing extremist Gray Wolves, should be closed.

Today, all but one of the mosques are open again. In the case of the mosques that were closed after the attack, one quickly reopened after a successful legal complaint, the other is still pending. Is there always just a PR campaign behind those big announcements, only addressed to Austrians with a strong negative attitude towards the Muslim community in Austria or to cover political failure?

In the case of the mosques, which were targeted by the authorities after the terrorist attack, the closure was at least not very successful. The association behind the mosque in Ottakring, a typical “backyard mosque”, was finally dissolved in March after an appropriate examination. However, a complaint was filed against the decision, which has now been forwarded to a regional a court. Not only the terrorist, also a Viennese salafist, who was allegedly killed in Syria, are said to have frequently visited the mosque. The focus on certain mosques seems to be chosen randomly, as in investigation files also other prayer houses appear again and again, without any consequences.

The second mosque, located in the Meidling district of Vienna, the main Muslim authority in Austria, the IGGÖ together with the authority responsible for associations lifted the closure again: Almost all attempts at dissolution were aimed at formal errors. That is the reason why the mosque close to the Gray Wolves only had to close briefly before it reopened under a new name.

The Austrian government hopes that the revision of current laws will provide better handling. On the one hand, the national Act on Associations has to be revised. There must be a “separation of club life and religious community,” according to the Interior Minister. As soon as an association also includes the practice of a cult as a purpose, the statutes should also be examined by the authorities dealing with religion. The Austrian Bar Association sees the planned change as an “invitation to an interpretation that violates fundamental rights”. The point is that it should not be possible to automatically prohibit the formation of an association as soon as a religious purpose is stated. The Austrian Constitutional Court has already ruled this to be lawful.

The amendment to the Islamic Law could also be a way: In the future, the Office of Culture should be able to close mosques more easily – if it is necessary to protect public safety, for example. This should now be possible “without delay” and without a prior request to remedy a suspected deficiency. A new provision is intended to enable the authority to immediately abolish the legal personality of mosque communities and thus of the smallest organizational units of the IGGÖ, which are only constituted according to internal religious law.

The legal representative of the sponsoring association of the Meidling mosque believes that there are plans to intervene in internal religious matters. He fears that the Muslims in Austria would be in a worse position than other religions, contrary to equality.

The Austrian Islamic Faith Community demands to refrain from dissolutions. It can decide on this completely autonomously. It is believed in the religious community that problematic ideas often are in the responsibility of individuals like the imam. For them, it would be wiser to replace it than to close an entire mosque community. In the case of Meidling, which was closed after the attack in Vienna, this is exactly what was done after the reopening. However, not until the imam taught anti-Semitic sermons. He has been said to have links to the Islamist scene for many years, as a Vienna weekly magazine reported in 2014 already.

What is certain is that the rapid closure of mosques could in future be more uncomplicated by law – and that the unauthorized closure will in itself no longer be illegal in many cases. Whether this really solves the problem is another matter. Because fast doesn’t necessarily mean sustainable.

If you look at the Meidlinger Mosque again, for example: the Austrian government urged the Muslim association to close it because the assassin had visited the house of prayer. This argument turned out to be insufficiently justified, for example during the examination by the club police.

And in the end, the “immediate action” that should now be possible, must be adequately justified by the authorities. It must be possible, as the Vienna Police Department stated, to assign violations of the law to an association. For this, evidence is needed above all, less the grand verbal gesture, because the reasons for the dissolution can be challenged by those affected.

It would be too short-sighted to limit the amended Islamic law to the easier closure of mosques. In the course of the reform, the responsible minister stipulated further measures that should bring more control – the focus here is primarily on the ban on foreign financing. To this end, the authorities should have an annual insight into the conduct of the religious and mosque communities. If the domestic financing requirement is violated, there is a risk of fines. According to the government bill “up to the monetary value of those funds that were illegally raised abroad”. If, on the other hand, the billing does not take place “upon request within a period to be set by the Federal Chancellor”, religious societies must raise up to 36,000 euros. In addition, the Islamic Faith Community (IGGÖ) must in future provide information about all institutions and (religious) officials at the Chancellor’s request.

For years now, authorities and governments know about the possible threats by extremist and radical mosque communities, acting in Europe. Austria and its political representatives were informed about dubious financing structures long time ago, the influence of Erdogan’s AKP, the Grey Wolves and the radical Milli Görüs movement in the Turkish communities in Austria.

While many legal experts underline the fact that the Austrian laws would be sufficient enough to challenge those radical and extremist influences, the political elite in Austria seems to have three main focuses alone: The Left in winning votes and support from the Muslim community by neglecting or ignoring proven threats by nationalistic and Islamist movements inside the communities, underscoring the “identity topic” as the only value and forgetting the European values as a major principle for a multicultural society; the Conservative government in covering its responsibility for the terror attack together with the general political crisis caused by judicial proceedings against the chancellor, ministers and close allies of the “New ÖVP” and finally winning voters, who in the past supported the populistic right-wing FPÖ. Politics should act on the basis of principles and values, not playing one part of the society off against another one!