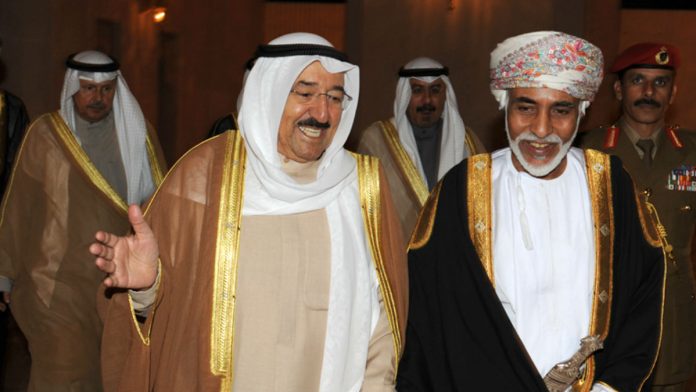 With the recent deaths of the leaders of Kuwait and Oman, the Gulf lost its mediators-in-chief. Omani Sultan Qaboos bin Sa’id al-Sa’id and Kuwaiti Emir Sabah al-Ahmad al-Sabah long played an important role in easing tensions in the Gulf – a role that many European diplomats greatly appreciated. As the successors of Sultan Qaboos and Emir Sabah settle in, Europe should quickly offer them the political and economic support they need to maintain their independence and to continue to facilitate regional diplomacy.

Sultan Qaboos and Emir Sabah were both diplomats at heart, determined to prevent the Gulf from being drawn deeper into conflict. This determination is needed today more than ever. The two new rulers in Kuwait and Muscat, Emir Nawaf al-Ahmad al-Sabah and Sultan Haitham bin Tariq al-Sa’id, have repeatedly stated that they want to preserve their countries’ traditional regional policies. But strong geopolitical winds are blowing across the Arabian Peninsula, and resisting them is likely to become ever-more difficult. While all the activist neighbours of Kuwait and Oman will likely try to draw the two states into their orbit, Saudi Arabia and the United Arab Emirates seem to be the best placed to succeed.

Against this backdrop, it is no surprise that Kuwait’s and Oman’s successions took place at record speed. Both countries lie at the intersection of the Gulf’s major fault lines – between Saudi Arabia and Iran, and between the UAE and Qatar – and fear that a power vacuum could leave them vulnerable to the geopolitical ambitions of their neighbours. On 8 October – only nine days after the death of Emir Sabah, who ruled the country for 12 years – his brother became the new emir, and the National Assembly unanimously confirmed Sheikh Mishal al-Ahmad as crown prince, a crucial position. In Oman, meanwhile, Sultan Haitham ascended to the throne just hours after the death of his predecessor, on 11 January.

Sultan Qaboos and Emir Sabah were the last remaining leaders to have been personally involved in the establishment of the Gulf Cooperation Council (GCC) in 1981. They were committed to the institution and to regional diplomacy. In 2014 Emir Sabah’s patient shuttle diplomacy resolved a major dispute between Riyadh, Abu Dhabi, and Doha. When a new crisis between the restive neighbours erupted in 2017, he tried unsuccessfully to mediate between them, proving unable to persuade a younger generation of leaders to commit to diplomacy.

Meanwhile, Oman and Kuwait have long advocated an inclusive approach towards Iran. Time and again, Sultan Qaboos positioned Oman as a neutral platform for diplomacy between GCC capitals and Tehran. He facilitated dialogue between Saudi Arabia and Iran in the 1990s, and between the United States and Iran in the 2010s. The latter talks, held in secret, laid the groundwork for the Joint Comprehensive Plan of Action. For many years, the Omani leadership has sought to mediate the crisis in Yemen, with the country’s Houthi movement maintaining a presence in Muscat. Kuwait, when chairing the GCC in 2017, sent a letter to Iranian President Hassan Rouhani calling for dialogue to ease tensions between Iran and Arab Gulf states.

As Europeans have become increasingly focused on challenges emanating from the Gulf, they have supported these efforts. They have sought partnerships with the mediators-in-chief, especially Kuwait, in stabilisation initiatives and other diplomacy on regional conflicts, such as those in Iraq and Yemen.

However, the leadership transitions in Kuwait and Oman could disrupt these efforts. Both countries have economic and political vulnerabilities that their assertive neighbours could exploit. Their still-unsteady leaders cannot afford to take the same diplomatic risks as their predecessors, lest they provoke retaliation from regional powers that would endanger their domestic stability.

In Oman, there are already signs of this. In recent years, under Sultan Qaboos, the country occasionally blocked the path of its neighbours. The UAE was not happy when, in June 2017, Oman opened its ports to allow Qatar to bypass an embargo imposed on it by the Saudis, the Emiratis, and the Bahrainis – a move that allowed Qatar to avoid capitulation. Riyadh has been irritated by Muscat’s diplomacy on Yemen, particularly its willingness to host the Houthis and its continued engagement with Tehran.

Since Sultan Haitham came to power, both Riyadh and Abu Dhabi have explored ways to persuade him to align with their vision of the regional order. The sultanate’s economic troubles offer a way in. In 2019 Oman’s budget deficit reached around $7 billion, with debt climbing to more than 50 per cent of GDP. And this was before covid-19 and the collapse in oil prices. While it recognises that domestic reforms are necessary, the Omani leadership is worried about exacerbating the socio-economic grievances that prompted people to take to the streets in 2011. Oman needs liquidity – and fast: after failing to engineer a GCC recovery fund (with Kuwaiti support), Muscat is now pursuing several bilateral deals. One such deal is a $2 billion bridge loan coordinated by Emirati financial institutions, which Oman secured in August. The same month, the country dismissed its long-serving foreign minister, Yusuf bin Alawi – who had an uneasy relationship with Abu Dhabi and was the Omani official with the closest links to Iran.

Kuwait may also shift the focus of its efforts. The new emir – who is 83 years old, and lacks strong geopolitical credentials – is less dependent than Sultan Haitham on external economic support, but he appears unlikely to push ahead with the risky mediation endeavours of his predecessor. The coronavirus crisis has made Kuwait’s political scene extremely contentious. And the country’s parliamentary election scheduled for December 2020 is especially vulnerable to external meddling. Crown Prince Mishal, himself 81 years old, has spent decades in the Ministry of Interior and as deputy head of the Kuwait National Guard. He is widely considered to be less of a pragmatist than his predecessor and – similarly to Riyadh and Abu Dhabi – wary of Islamists. Therefore, Kuwait will probably become less engaged in efforts to resolve the regional dispute over the role of Qatar, a key backer of the Muslim Brotherhood.

Facing the potential loss of Kuwait and Oman as regional mediators, Europeans should work to protect the two countries’ non-alignment. European states, which have an interest in stabilising the Middle East, need to strengthen like-minded regional players if they are to help de-escalate the disputes centring on Qatar and Iran. To this end, Europeans should quickly consolidate their relations with both Kuwait and Oman, finding ways to build up the countries’ resilience. The effort should involve high-level European political support for the countries’ independent positions, an exploration of joint diplomatic initiatives, and assistance for economic reforms. This might be easier with Kuwait, to which Europeans have paid greater political attention than Oman. The European Union opened a new diplomatic mission in Kuwait in 2019, thereby intensifying institutional engagement between the sides. European countries, with the exception of the United Kingdom, have weaker relations with Oman. But, having recently signed a cooperation agreement with Oman, the EU has created a basis on which to support the country’s economic reform agenda.