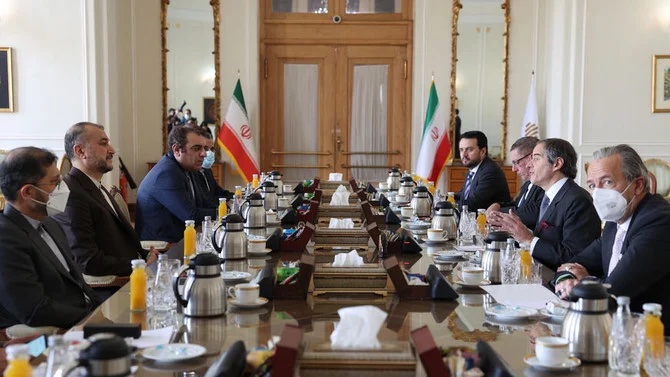 It was probably the last attempt to save the nuclear agreement with Iran: Last Thursday, the negotiators from the US, Iran and the European Union traveled to Vienna to find out whether an agreement is possible on a proposal that EU foreign policy chief Josep Borrell submitted.

The EU’s chief diplomat put it together, the final results of a possible new agreement on a nuclear deal with Iran: „What could be negotiated has been negotiated and is now in a final text”, Borrell wrote on Twitter. The document he mentions details the steps taken to return to the 2015 nuclear deal. Above all, the US, who left the diplomatic table under President Donald Trump in 2018 with imposing a dense network of sanctions against Iran, must return, as must the Iranians, who subsequently violated all the limits of their nuclear program and many control obligations.

The states that have been negotiating with Iran about its nuclear program in this format of „P5 plus 1“ (the permanent members of the UN Security Council plus Germany) for almost two decades have always been joining negotiations for a final deal with the Mullah regime, which strictly limits and monitors Iran’s nuclear program and a lifting of international nuclear sanctions. Despite all the geopolitical tensions, they are united in their interest in Iran not building nuclear weapons and thus triggering a nuclear arms race in the region. Even Russia seems to be on board, although it’s impossible to say for sure these days.

The draft submitted by the EU has not been published yet. In any case, the individual steps are unlikely to be spectacular, but extremely technically and legally detailed. The text results from the negotiations, which have been conducted in Vienna since April 2021 with interruptions.

In a “nuclear” part, it is to be regulated how Iran dismantles its enrichment plants and dilutes the uranium enriched to up to 60 percent (instead of the 3.67 percent permitted in the JCPOA) or exports it. Tehran must also allow the International Atomic Energy Agency (IAEA) to implement the agreed tight control regime again. Iran has restricted IAEA’s access in the past and recently even switched off cameras, resulting in a gap in surveillance. It was primarily such questions that had to be answered in the past few months, making it necessary to “fine tune” the text, which had basically been finished since February.

The European Union did not sit at the negotiating table, but its member states Germany and France, who still appear with Great Britain as the “E3” group, did. However, the EU has taken on the role of a coordinator.

Iran’s negotiator Ali Bagheri-Kani said he wants to “advance negotiations” in the Austrian capital. However, he made it clear that Iran sees the United States as having an obligation to deliver. Tehran’s and Washington’s diplomats did not speak to each other directly, Iran denies that. That is why the EU diplomat Enrique Mora was in the role of a mediator. A first such round in Qatar was unsuccessful at the end of June.

Borrell then made slight changes to the text of an agreement that would pave the way for the US to return to the 2015 nuclear deal – and with which Iran would also commit to once again complying with its restrictions on its nuclear program. For some time, Iran has drastically accelerated both uranium enrichment and the expansion of nuclear facilities. A final negotiated text for an agreement was already finalized in March, but so far Iran’s further demands have stood in the way of a new deal.

Two crucial aspects need to be clarified, which Iran would have liked to be included in the JCPOA negotiations, but not the West. First, the IAEA has questions about traces of undeclared nuclear experiments, believed to have been started back in 2003, about which Iran has so far given no credible explanation. Tehran is demanding that the IAEA has to stop its investigations into several suspected plants that Iran had not declared as part of its nuclear program. IAEA inspectors found traces of uranium at the three locations, evidence of secret nuclear activity. While the events at two of the facilities in question are said to date back about 20 years, at a third they may have lasted until 2018, long after the conclusion of the nuclear agreement in summer 2015. Second, Tehran wants its Revolutionary Guards to be removed from the US terror list, Washington doesn’t want that. The Iranian regime is now apparently ready to accept that the US will not lift the sanctions against the Revolutionary Guards for the time being. US President Joe Biden ruled that out. However, Tehran continues to demand guarantees from the US that it will not withdraw from the agreement again, as then-President Donald Trump did in 2018..

All of this suggests that the negotiations on the remaining open aspects are not being conducted in Vienna, but at a more discreet location. It is not even certain that a deal, if successful, will be concluded with great fanfare and meetings of foreign ministers. Perhaps this will happen quite soberly with a meeting of the “Joint Commission”, as originally provided for in the JCPOA.