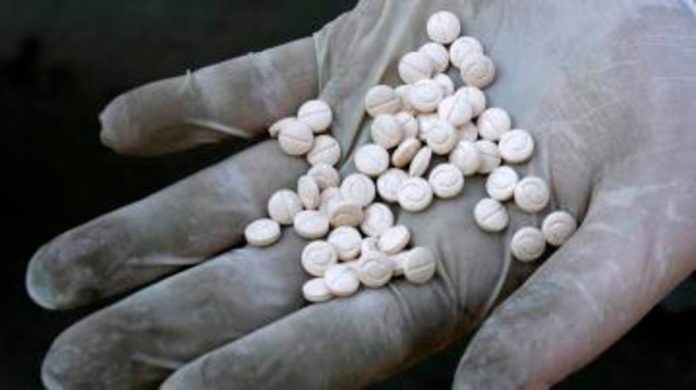 When Saudi security authorities announced a spectacular blow against drug smuggling about a year ago, paper packaging that almost everyone in Syria is familiar with appeared on the photos: Mate tea from the “Kabour International Group”. Disguised drug investigators tore open the bags from which not the enormously popular caffeine-rich leaves of the mate bush from South America oozed, but tablets of one of the most popular synthetic drugs in the world: Captagon. The Saudi investigators found 44.7 million pills. The shipment had been brought to the Gulf from the Syrian port of Latakia – a frequent route for the banned stimulant.

When Adib Kabour, the head of the Syrian family business, talks about these images, he looks perplexed. “I have nothing to do with it,” he says. There are Syrian businessmen with good names who are convinced of his innocence and who vouch for Adib Kabour to be “clean”. He says he doesn’t know how the tablets got into his tea packs. The printed sheets of paper are imported from Spain and he can’t remember some of them gone missing. “The machines in our factory that press the mate tea into the packaging would crush the tablets into powder,” he says. “The only way would be to tear open the bags individually, empty them, fill them with the tablets and close them again.” This is possible because his mate tea is also sold in large quantities in the country’s wholesale markets.

But these are all just theories. Adib Kabour has turned to the Syrian authorities for facts, but there is no reference number on the case. The police’s terse answer: The pictures from Saudi Arabia must be a fake. Here, the story of the Syrian mate king comes to a point where he doesn’t speak any further. He wants to clear his name, but remains silent about those who Western investigators and authorities see as the main suspects in drug smuggling from Syria: The trail repeatedly leads to powerful circles of the Syrian regime and the clan of President Bashar al Assad. Pointing your finger at such people can easily cost you your life.

Time and again, Western and Arab security authorities discover drug deliveries from Syria. And again and again the freight should actually end up in the Arab Gulf states, especially in Saudi Arabia, which is one of the largest markets for Captagon. There, armies, especially young men, escape social narrowness with the help of chemical agents. Large quantities of Captagon pills are regularly confiscated in the kingdom, which cost only a few cents each to produce but are sold for several euros; there are fantastic profit margins. Only recently, the Saudi authorities again seized nine and a half million pills that were hidden in a shipment of parquet wood. Saudi and Syrian nationals were arrested. At first it was not possible to determine where the freight originally came from.

But in several cases there are connections to the Syrian port city of Latakia. It is located in the heartland of the Alawites, the population group of the powerful Assad clan, near their home village. In July 2019, the Greek coast guard and drug investigators seized 33 million Captagon pills from Syria – with a market value of more than half a billion dollars. In April of last year, Egyptian customs found around four tons of hashish on a ship from Latakia, hidden in milk cartridges belonging to a company owned by Bashar al Assad’s cousin, Rami Makhlouf, who denies having anything to do with it.

Italian investigators reported the most spectacular find to date last July: 14 tons of Captagon pills, 84 million pieces with a street sales value of one billion euros, lavishly hidden in huge rolls of paper and head-high gears that could only be extracted with heavy equipment. Even if the Italian authorities initially suspected the terrorist organization “Islamic State”, investigators and well-networked Syrian observers see the people behind the regime’s higher ranks at work.

There is a pattern: the drugs are shipped from the port in Latakia. In the event of a stopover, a new waybill is organized to disguise the origin. Western secret services bring several transport companies in Syria into contact with the Captagon business and at the same time with the Assad clan or Syrian government agencies. The feedback from several informants from the Syrian business world on the company names is clear: They belong to the orbit of the infamous 4th Division, which is commanded by Maher al Assad, the brother of the Syrian ruler. The force is far from being the elite force it has long been known as. The task force enriches itself with all sorts of dark deals, ranging from tolls and looting to drug smuggling.

The activities of the 4th Division, which is one of the Iranian forces in Syria, are also worrying the neighboring countries. Drugs are smuggled from Syria to Saudi Arabia not only by ship. There is also a route via Jordan, with a land border that can hardly be secured. High Jordanian government officials are sounding the alarm because the 4th Division on the other side of the border is a heavily armed military unit protecting the drug trade. According to non-public studies for Western governments, based on a broad network in Syria, Hezbollah dominates drug smuggling in southern Syria, in which more than 120 groups are involved. According to such a report, the Lebanese Shiite organization can use the profits to pay for its military presence there and still send money home. In doing so, they are primarily doing common cause with the Syrian military intelligence, as well as with the 4th Division, which has its own Captagon kitchens in Syria.

For Damascus and its battered war chest, drug money is important – if not vital. “The drug business has long since become an important source of income for the regime – especially when it comes to hard Western currency,” says Jihad Yazigi, who publishes the “Syria Report”, an Internet portal devoted to the Syrian economy. Dollars are a precious and extremely scarce commodity in Assad’s ruined and squeezed empire. The economy is shattered, the value of the local currency has fallen. Measured against the black market value of the Syrian pound, the Syrian budget for 2021 is just 2.2 billion dollars.

There was never any fear of contact with the drug business under Assad rule. When the Syrian regime occupied Lebanon, Damascus made good money growing hashish on the Bekaa plain there. “The smuggling of drugs to Saudi Arabia was sometimes more, sometimes less – depending on the relationship between Riyadh and Damascus,” says Malik al Abdeh, a Syrian observer and political advisor. “But in the past ten years Syria has become a narco state like the one in Latin America.” Given its geographical location, Syria is something like the “Mexico of the Middle East”: a transit country for smuggling into the wealthy markets of the region with a growing domestic production.

“The growing drug business in Syria is a direct result of the regime’s survival strategy. It’s bankrupt, but wants to keep fighting to the bitter end,”continues Malik al Abdeh. “The solution is to unofficially and informally encourage the cultivation and trafficking of narcotics by militias and clans affiliated with the regime, instead of having to pay salaries.” His observations are confirmed by several sources in the regime-controlled areas of Syria, who fear for their security do not want to be quoted by name. “The security authorities allow farmers struggling for economic survival to grow hashish – in return they expect calm and loyalty,” says one of them.

Assad is not only giving up more and more control on a small scale in order to maintain his regime. A large part of the Syrian borders is now controlled by militias who tend to listen to its protective powers Iran and Russia or work on their own account. Mafia gods, warlords and drug barons build their small empires. The advancing state collapse and the rampant drug deals undermine its authority. There is resentment among the population. In Sweida, a province in southern Syria that is a hub for drug smuggling into Jordan, this anger is even reflected in dissident slogans that are sprayed on walls. “It is not important that the country falls apart, it is important that Bashar stays in his chair,” it says ironically. Hezbollah and the secret service are known as “gangs”. Residents of the province report in chat messages that Iran is building up local smugglers to become influential vassals. There is talk of a “dark empire”. According to these reports, hashish consumption is increasing, as is outbreaks of violence while intoxicated. And there are unanimous complaints about Russia that it does not take the threat posed by this infiltration seriously enough.

Moscow has nothing fundamentally against doing business of this kind, but it is bothered by the Iranian efforts to establish a shadowy realm of its own beyond the Syrian institutions. The Russian leadership lets its nominal Iranian allies feel this again and again. At the beginning of the year, according to reports from Western intelligence services and Syrian observers, there were clashes in the Syrian-Lebanese border area when Syrian customs officers, with Russian support, attacked smugglers close to Hezbollah. There has also been Russian pressure on the President to do something about the 4th Division’s drug deals. In Sweida, Moscow has been trying to strengthen Russian grip on the border since the end of last year. There, too, is a conflict with the interests of Maher al Assad and the 4th Division.

Adib Kabour, the mate importer, is taking legal action against press reports that bring him close to the notorious president’s brother. “It’s a bitter irony,” says a Syrian businessman who vouches for Kabour’s sincerity. “Adib is supposed to work with those who want to usurp his business.” Maher al Assad’s people even got in touch with his suppliers in Argentina. There may be others in the regime protecting Adib Kabour, who is also vice chairman of the Damascus and Surrounding Chamber of Commerce. Nobody in Syria can do big business without contacts. “Everyone has to pay,” says the business world. 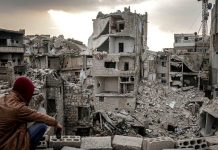 Syria: “We will not be silent”

MENA Research and Studies Center - 2021-04-08
When Saudi security authorities announced a spectacular blow against drug smuggling about a year ago, paper packaging that almost everyone in Syria is familiar...

Centre de Recherche et d'Études MENA - 2021-04-08
The European Union is approaching Turkey again - although there have been setbacks in terms of the rule of law and fundamental rights. The...

MENA Research and Studies Center - 2021-04-08
Concurrent with the Turkish attempts during the past months, to improve its tense relations with the West, specifically the United States, the latter imposed...

MENA Research and Studies Center - 2021-04-08
The Egyptian Foreign Minister, Sameh Shoukry, arrived in the Sudanese capital, Khartoum, accompanied by the Sudanese delegation coming from the Democratic Republic of the...

MENA Research and Studies Center - 2021-04-06
When Turkish President Tayyip Erdogan announced his withdrawal from the Istanbul Convention of the Council of Europe for the Protection of Women against Violence...