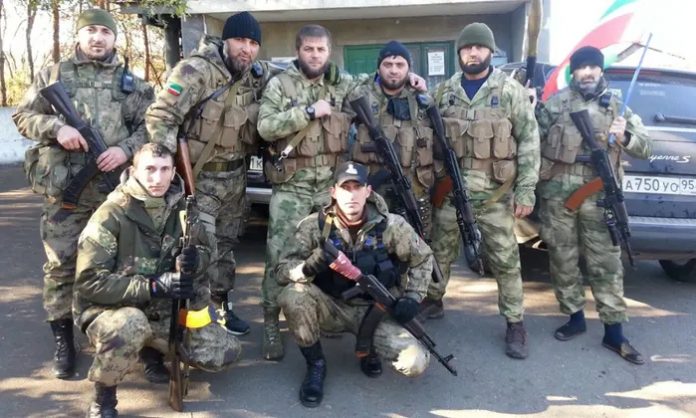 Already at the beginning of the Russian invasion in Ukraine, it became public that fighters of the Chechen despot Kadyrov, president of the republic and Putin’s puppet, are responsible for many atrocities such as murder, rape and kidnapping of Ukrainian civilians in reeducation camps on the Russian side. Now the first indications are growing that representatives of political Islam in Europe can also be linked to the war crimes in Ukraine.

Chechen fighters have repeatedly appeared in the Mariupol area and presented themselves in the misery of the destroyed villages and towns, in their statements they repeated the propaganda of the Kremlin, all under the headline “For the truth!”

In some of these photos from the “digital press kit” of Chechen war criminals, one person doesn’t quite fit the image of a combative mujahideen, dressed in camouflage and with the typical “Kadyrov beard”: He is wearing a blue western baseball cap and a fashionable down jacket .

This man has had several names over the course of his life: Born as Vadim Medvedev in Siberia, he initially unsuccessfully studied history in Moscow before he converted to Islam and quickly found sponsors from the Arab world and probably also from state sources in Russia to establishing Islamic study centers in the country, which should be designed in close cooperation with the Kremlin. Since that time, Medvedev has called himself AbdulVahed Niyazov, not related to the former Russian Prime Minister and President.

This man is now President of the „European Muslim Forum“ (EMF), a dubious institution that aims to be “the legitimate representative of all Muslims in Greater Europe,” whose sphere of interest stretches from the Atlantic in the west to the Caucasus in the southeast. Members of the EMF are Islamic theologians who have been shown to have close ties with the Muslim Brotherhood, form collaborations with Erdogan’s family members and the AKP party, and lobby heavily for Islamic extremism-supporting Qatar. In addition to these close ties to internationally dubious ideologies, this dovetailing with Putin’s Russia is not discussed. However, German security circles assume that more than 70% of EMF members have Russian citizenship. “According to our research, it is clear that the forum must be a Kremlin propaganda machine that is trying to drive Muslim communities into the arms of Putin on the one hand, or to increase the potential of political Islam in Europe, using it to carry the Kremlin’s idea of Europe to the West,” said an employee of the German Office for the Protection of the Constitution.

On the Internet site of the forum, an address and an imprint are not given, although required by the EU data protection directive. The WHOIS query for the domain is also not helpful, it only states that the owner is registered in France. Niyazov himself states on the site that he lives in Brussels and Barcelona.

Investigations have now revealed that Niyazov’s Islamic organization has at least one postal address in the northwest of the Danish capital, Copenhagen, in the home of a private individual, along with an address in Paris, which is mentioned in one of the EMF’s press releases on its website.

Until 2021, the EMF was also registered in London as a British “Ltd.”, with the business branches “PR and communication, the organization of conferences and foreign policy”. The publicly visible business registration notes that Niyazov has a British place of residence and holds the job title of „Public Figure“.

In his public appearances, be it Facebook or other publications, he likes to appear with Russian chief ideologues, e.g. Foreign Minister Lavrov. In his statements, he also shows a more than questionable attitude, similar to the rhetoric of the Putinists: Niyazov recently published the video of an LGBTQ+ rally with the following comment (translated from Russian): “We will wash away this dirt, as it has already worked several times in history!”

His postings on Facebook and Instagram also show that he either earns above average or still has generous sponsors at his side who invest a lot of money in his work: His travel activity corresponds to that of a commercial pilot. In recent months, the EMF President has traveled particularly frequently to Sarajevo, Bosnia-Herzegovina, and Turkey.

The rhetoric, ideological focus and people and institutions that are close to the EMF or work for it suggest that there is a close connection with political Islam and the Muslim Brotherhood. In this context, it is also important that the forum is the first European institution from the orbit of legalistic Islam that has a demonstrable close relationship with Russian state authorities, Niyazov’s joint appearance with war criminals in Mariupol is only the last perfidious expression. It is precisely here, with the “European Muslim Forum”, that European security authorities should take action.