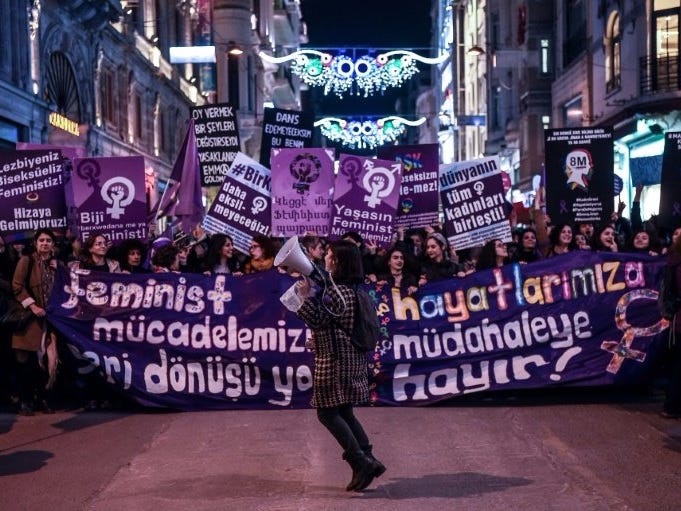 A photo shows a small group of women with protective masks and purple banners in the middle of a cauldron of police vehicles and heavily armed security guards. Since the Gezi protests in 2013, demonstrations in Istanbul’s central Taksim Square have been strictly prohibited. The platform for the prevention of feminicide dared to disregard it on March 21. The night before, President Recep Tayyip Erdoğan announced his withdrawal from the Istanbul Convention on the Prevention of Violence against Women.

“This photo shows our situation very well,” says Gizem Eken. The 29-year-old is part of a Turkey-wide platform that has been fighting against femicides and the rampant violence against women for years together with other organizations. “The state is afraid of us. We only give a voice to the many who demand protection from violence.” The photo was taken directly under the eyes of the police and then shared thousands of times on social media. Despite the ban on gatherings, people across the country took to the streets or participated in the protests from windows and balconies. That had consequences. In the Aegean city of Denizli, Esmaeil Fattahi, Leili Faraji, Zeinab Sahafi and Mohammad Pourakbari Kermani, political refugees from Iran who took part in the protest, were arrested and are in detention. Arrests were also made on the campus of the Bosphorus University in Istanbul. Since the beginning of the year, students have been protesting against the appointment of a rector close to the government and the pressure on the strong LGBTIQ movement there. In the meantime, it has to serve as a lightning rod, says Tahsin A., a student in the Department of Political Science. “President Erdoğan justified the withdrawal from the Istanbul Convention on the grounds that it would damage family unity and promote divorce. When the protests began, the communications director of the presidential palace, Fahrettin Altun, followed up. The agreement is used by a group of people to normalize homosexuality.”

But despite these offensives, the majority of the population in Turkey does not support the decision of the political leadership. According to a survey by the opinion research institute Metropoll, only 27.2 percent of the population in Turkey support the exit, 52.3 percent are explicitly against it. The Istanbul Convention of the Council of Europe is a treaty to prevent violence against women and came into force in 2011 as a central instrument to combat it. This includes rape, forced marriage, but also sexual harassment and a broad catalog of requirements for the security forces and judicial authorities to prevent violence. The city of ratification, Istanbul, was chosen as a signal for Turkey’s then-EU reform course.

118 Femicides since the beginning of the year

The current dilemma of the women’s movement: Despite broad social support for their demands, the situation of women is worsening day by day. Last month, the “Platform to Prevent Femicide” documented 70 acts of violence against women, and since the beginning of the year there have been 118 fatalities. “With their statements and decisions, the political leadership legitimizes the family as the place where women should be protected. But the family environment is the main culprit for femicides. 80 percent of the victims are killed by close relatives. From fathers, brothers and, above all, from partners who want to leave them.” The platform has been documenting feminicide on the Internet since 2008, as a virtual memorial. The dates and circumstances of the killings are meticulously collected. The increasing brutality that women’s rights activists attribute to the fact that women are becoming more emancipated in society as a whole and are looking for ways to become independent is shocking. In Ankara around March 7, the family man Zeynel K. gained access to the apartment in which his wife Reyhan lived with the children. She had obtained in court for domestic violence that he was no longer allowed to approach the family. The 38-year-old cut the mother’s throat in front of the children and then turned himself in to the police. “In court, perpetrators hope for the many mitigating circumstances that are often used in legal practice in such cases,” says lawyer Evrim Inan from the Bodrum Women’s Solidarity Platform. The women’s rights activists there are pursuing the trial of the alleged murderer of the student Pınar Gültekin. The murder had caused horror in Turkey and internationally last year. A well-off bar owner admitted when he was arrested in the southwestern province of Muğla near the Aegean coast that he first strangled the 27-year-old, then burned it and buried it in a clearing in the forest. The local Jandarma, a police unit of the military, discovered the body there after the relatives reported Gültekin as missing. Girlfriends of the victim gave the clue that led to the arrest of the former lover. In court, the defendant is now trying to create the impression that he has been the victim of blackmail. The murdered woman tried to force him to leave his family and asked for money so that she did not tell about the relationship. “The protection of the family serves as a justification for a cruel murder, that’s absurd,” said the indignant father of the murdered woman after the first few days of the trial. In this context, women’s rights activists see the withdrawal from the Istanbul Convention as a completely wrong signal within a society, in which awareness of these contradictions has actually developed in recent years. Gizem Eken emphasizes that the platform for the prevention of feminicide consciously includes the families of the victims in its campaigns. It is not about the family as an institution, but about fighting domestic violence.

The close circle of advisors around President Erdoğan sees it differently. Hilal Kaplan, for example, who works as an influential journalist for pro-government media. “Turkey must break away from European paternalism,” is one of their arguments. Kaplan is a proponent of the reintroduction of the death penalty. Its abolition was one of the prerequisites for the EU accession talks with Turkey in 2004. With this demand, the journalist uses the point of view of those who are critical of Europe and who are calling for a course of their own. A new finish line is forming in government circles. The deputy chairman of the ruling AKP, Fatma Betül Sayan Kaya, favors the development of an Ankara convention for the protection of women’s rights, which should now be developed. A perspective that does not give the women’s rights activists hope. “The current course primarily reflects a turn to nationalist attitudes and has little to do with an interest in protecting women’s rights,” says Gizem Eken.