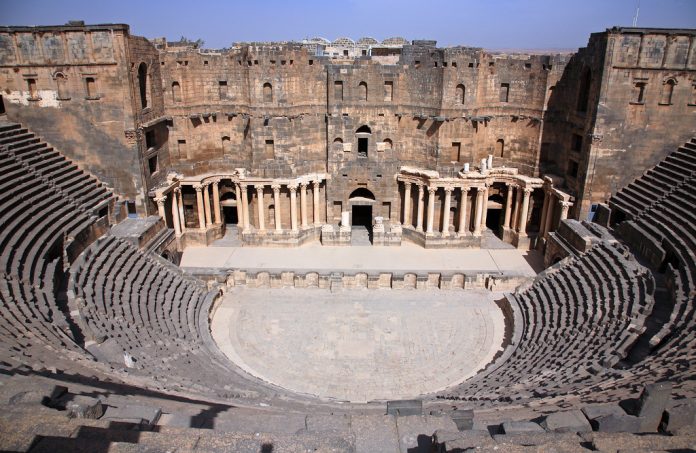 A theater is carved into a slope. Two temple mounds are enthroned above the scenery, including remains of churches, recognizable by their apses. It is as if the Rome of the last Christian emperors had been condensed into a park of ruins. But this is not Rome. This is Gerasa, a Middle Eastern metropolis of late antiquity.

The end of antiquity is one of the most important eras in Mediterranean history – perhaps the most important. At that time, the cards in the power game were reshuffled in Europe, North Africa and the Middle East, and many ethnic and cultural constellations emerged that still determine life in these three regions today. In Western Europe, the Germanic states divided the crumbling Western Roman Empire among themselves. Despite the reconquest of Justinian, North Africa broke away from the sphere of influence. And in the Balkans, the migrations of the Huns, Slavs and Hungarians created the conditions for the formation of states in the High Middle Ages.

The most important of the late antique transformations took place in the Middle East. The Roman provinces of Syria, Arabia and Palestine survived the crisis of the third century relatively unscathed because the client state Palmyra intercepted the onslaught of the Persian Sassanid Empire. They flourished in the fourth and fifth centuries. This is where the trade routes from India and the Far East flowed, here – for example in the sanctuary of Saint Symeon with its huge domed church – the desert tribes were baptized, and here was the center of Eastern Roman oil production, as can still be seen today in the imposing stone buildings of the Dead Cities in northern Syria.

However, in the age of Justinian, the region came under pressure. In 540 the Persians conquered Antioch, a sign that the military border to Mesopotamia had become fragile. Seventy years later, the armies of the Great King Khosrau flooded Syria, Egypt and Asia Minor. The Eastern Roman Empire, which seemed to be about to end, emerged victorious but weakened from the duel with the Sassanids. When Emperor Herakleios carried the relic of the “True Cross” back to the conquered Jerusalem in triumph in March 629, the armies of the Prophet Mohammed had already brought Mecca and a large part of the Arabian Peninsula under their control. Five years later, Damascus surrendered to the Arab besiegers, and Antioch followed in 638. “Farewell, Syria!” Herakleios is said to have exclaimed as he boarded the ship back to Constantinople.

Was the Muslim conquest of the Middle East a cultural break, a victory of the desert, as earlier ancient historians have speculated? On site, in the ruins, in the villages and metropolises of the Middle East, the question is difficult to answer because the new rulers have left barely visible evidence of their presence. The oldest monumental sacred building in Islam, the Dome of the Rock in Jerusalem, was built around 690, half a century after the victory of Islam, the Umayyad mosque in Damascus is about twenty years younger. The field of ruins at Palmyra is dominated by the Muslim castle Tadmor, which, however, dates from the thirteenth century. Apparently the followers of Muhammad settled down in the Christian reshaped ancient cities as well as the Germanic conquerors in the Roman settlements of Western Europe. They came as heirs, not destroyers.

Gerasa, today’s Jerash, is located fifty kilometers north of the Jordanian capital Amman, in the center of a region that was known in antiquity as the Decapolis, the “League of Ten”. Nearby, on the Sea of ​​Galilee, according to the reports of the evangelists Luke and Mark, Jesus healed a demon from Gerasa by letting his demons drive into a herd of pigs, “and the flock rushed down the slope into the lake and drowned” (it is the motto of Dostoyevsky’s novel “The Demons”).

In biblical times, Gerasa, whose name is of Semitic origin, had existed for centuries. But it was only with the annexation of the Nabatean Empire – whose capital Petra is four hundred kilometers further south – by Trajan that the city began to flourish. Now the Oval Forum was created, the largest preserved arcade square of antiquity, which connected the Cardo, the north-south running main traffic axis of Gerasa, with the Jupiter temple built on the foundations of a Hellenistic shrine of Zeus.

The cardo itself was now adorned in its central part with magnificent Corinthian columns and separated from the northern and southern sections by two tetrapylons, in which the Ionic column order of the Hellenistic period was preserved. To celebrate the visit of Emperor Hadrian in the winter of 129/130, the city had a forty-meter-wide and twenty-meter-high arch of honor built, which was reconstructed from rubble by the English and American archaeologists who have uncovered the field of ruins since 1925. Sixty years later, the Nymphaeum was built, a fountain house whose water features and marble statues must have taken the breath of the trade caravans that arrived in the city on Wadi Jerash. The basins from which it was fed have been preserved in a hamlet two kilometers north of the village.

The main attraction of Gerasa was, of course, the Temple of Artemis, a pilgrimage sanctuary, which also got its present form in the second century AD. In the Hellenized Orient, the Greek goddess of the hunt was often equated with the Magna Mater. A processional path led to their place of worship, which began on the north of two river bridges and climbed between column arcades to the temple terrace high above the valley. From the ruins of the temple, the eleven preserved columns of which are the landmark of Gerasa, you can see the modern city of fifty thousand inhabitants on the other side of the wadi as if from an opera box.

The cult of Artemis ended around 400 AD. Everywhere in the Roman East churches took the place of temples. To the south of the pilgrimage site, a Dionysus sanctuary was converted into a basilica, the hybrid shape of which can still be seen today on the foundations, because the old entrance led around the entire church building from the east. The Theodor Church, which is located right next door and was consecrated in 496, was, however, a new building that architecturally incorporated the fountain in the inner courtyard, in which a wine miracle should have occurred.

The archaeologists found that none of the new churches had a single block removed from the quarry. They all grew out of spoilage, materials from older, demolished buildings. The same applies to the buildings of the early Islamic period. Today we can no longer imagine that an era feeds on what is already there. In late antiquity this practice was self-evident. The transformation from pagan history to salvation history took place quite palpably. The world has been rebuilt.

After the city was taken by the Arabs, the churches of Gerasa remained untouched. Only their mosaics were partially removed in the early eighth century, when the Islamic ban on images prevailed. The new rulers did not initially think of imposing their religion on the Christian majority. They settled where their economic interests lay, in the market district on the southern Tetrapylon. It was here, on the foundations of Roman town villas and bath houses, that their places of prayer were built. In 1981 a small mosque from the Umayyad period was uncovered, and in 2002 a larger second one. A nested residential complex nearby testifies to the prosperity of the new ruling class. Gerasa’s success story continued under the banner of the Prophet.

The late bloom ended suddenly with a natural disaster. In January 749 the earth shook around the Jordan Valley. Many cities in the Decapolis sank completely to rubble, others, including Gerasa, suffered severe damage. At the same time, the Persian Abbasids gained the upper hand in the struggle for the caliphate against the Arab Umayyads. The center of power of Islam shifted from Syria to Baghdad, the trade routes no longer passed through Gerasa. The city became depopulated. When the Islamic traveler Al-Yakubi visited it in the ninth century, it was deserted. It was not until 1250, during the time of the Crusaders, that a settlement emerged again, which a German-Danish team of archaeologists excavated in recent years. In 1596 there were twelve taxable households here. After that the place became deserted. In 1812 the Swiss traveler to the Orient, Johann Ludwig Burckhardt, who made the first sketches of the ruins, found a deserted site. Only decades later did the Ottoman Empire settle Circassian refugees from the Caucasus at Wadi Jerash.

What we call the modern age was a time of standstill for the Middle East. For this it had played a role in world history a good thousand years earlier. Their traces are in the stones. We just have to read it.