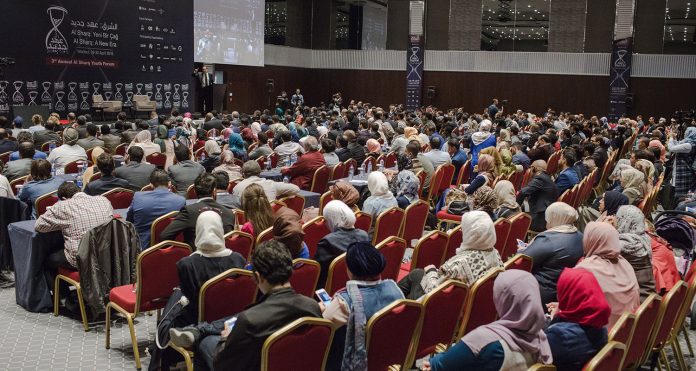 Despite indications that the Turkish regime has decided to clamp down on the Muslim Brotherhood as one benchmark for achieving reconciliation with its former opponents in Egypt and the Gulf states, the influence of „political Islam“ continues to be present in Turkish political life and in media activities.

In mid August, the” Youth Forum of the East” held its sixth annual conference, attended by about a thousand young people and academics from several countries.

The forum was attended by Turkish Minister of Youth and Sports, Mehmet Kassab Oglu, the Lebanese Minister of Environment Nasser Yassin, and Comfort Aero, President and of „International Crisis Group“, discussing the impact of the Ukrainian-Russian war, the covid pandemic, the climate change crisis and the search for alternatives to meet the above mentioned challenges.

The forum also discussed the unprecedented global risks faced by young people, such as their “widespread disillusionment, lack of engagement with public affairs and tendencies towards populist narratives due to a lack of trust in economic, political and social structures”.

The presence of the Muslim Brotherhood

The list of attendees also included figures widely accused of being affiliated with the Muslim Brotherhood, most notably Fadi Itani, chief executive of the Muslim Charity Forum (MCF) in Britain and Linda Sarsour, member of the Council on American-Islamic Relations “Care”, one of the arms of the International Organization of the Muslim Brotherhood in the US, in addition to Heba Raouf Ezzat, Egyptian academic close to the Muslim Brotherhood youth movement and the director of the Durham Center for Islamic Economics and Finance, Mohamed Asotay.

“Humanity meets at a crossroads that the world has not seen for years, carrying many contradictions, in which we must think and reflect to build a future full of values,” said Wadah Khanfar, president of the Forum, in an opening speech of the conference.

Khanfar also touched upon the statements of US President Joe Biden during his visit to the Middle East, where he said that „we should not leave a vacuum left by other countries,” accusing Biden of insulting the people of the Middle East.

What is the “East From“?

The Forum was established in Tunisia in early 2012, in the presence of influential figures of the Muslim Brotherhood, led by Sheikh Rashid Ghannouchi, head of the Tunisian Ennahda movement and Abdel Hakim Belhaj, head of what was known as the „Military Council“ in Tripoli, with the aim of “consolidating the values of communication, dialogue and democracy among the people of the Eastern region, contributing to building a politically stable and economically prosperous future, through the development of political awareness and the exchange of experiences.“

The Forum, officially registered in Geneva, Switzerland as a non-profit organization, also seeks to achieve its goals by “conducting a deep dialogue between political forces, intellectual and social leaders, youth movements and businessmen”.

Every year, the forum organizes a youth conference in Istanbul under bright slogans such as “supporting and encouraging youth initiatives and developing political awareness”. Observers describe the events as an attempt to create an Islamic alternative to the World Economic Forum in Davos, where business elites meet and discuss with head of states from different countries of the world converge.

The Forum comprises three main pillars: Al Sharq for Strategic Research, Al Sharq academically, and Al Sharq youth. The forum has been chaired since its establishment by the former director of Al Jazeera, Wadah Khanfar.

In late January, Istanbul hosted a conference entitled „Youth for change, a decade of struggle and a step for the future”, which was attended by a number of Brotherhood leaders from Egypt and the Arab world together with leaders of the “Hasm” Movement, the armed wing of the Muslim Brotherhood in Egypt. The conference aimed, according to the words of its participants, to “revive” the revolutions of the so-called Arab Spring and return the young people fleeing to Turkey to their countries again, “to participate in the process of change and the removal of regimes,” as they put it.

The Muslim Brotherhood also organized its second international conference on the 94th anniversary of its founding under the slogan „Authenticity and Continuity”, in early March in Istanbul, in the presence of some of its representatives and delegates from the ruling AKP party in Turkey.

These events come amid attempts by Turkish President Recep Tayyip Erdogan to improve relations with the countries of the Middle East, in an attempt to save his country’s crumbling economy and ease the internal opposition’s criticism of his foreign policies. And the issue of Ankara’s support for the group was one of the main reasons for the enmity of Egypt and the Gulf states with Turkey.

The leaders of the Muslim Brotherhood and its allies fled to Turkey are active in propaganda for the AKP party of President Erdogan during local, legislative and presidential elections, on the premise that he corrected the mistakes of secularists,eliminated the old secularism rooted in the country, defied the United States and the West and championing the issues of an Islamic nation.

Egyptian writer Hisham Al-Najjar, in an article in the London newspaper Al-Arab, links Turkey’s continuation of providing the appropriate environment for the Brotherhood’s presence with Erdogan’s desire to employ the group and its leaders to win the upcoming elections in light of the rapid decline of his popularity on the impact of the economic crisis in Turkey, where the Islamists are trying to portray Erdogan as an Islamic hero, who wants to extricate the country from the setbacks caused by secularists, but the success of this propaganda remains uncertain.

The author believes that the reemergence of the Brotherhood at this qualitative level, with speeches reminiscent of the language of threat and incitement – launched already in 2014 and 2015 – had begun before Ankara announced its desire for reconciliation and settlement of differences with Cairo and is not related to the current situation in Egypt, where the group is at its weakest, The majority of observers consider it a calculation of what could happen to the Islamist movement if the AKP party would lose the next elections and President Erdogan removed from power.