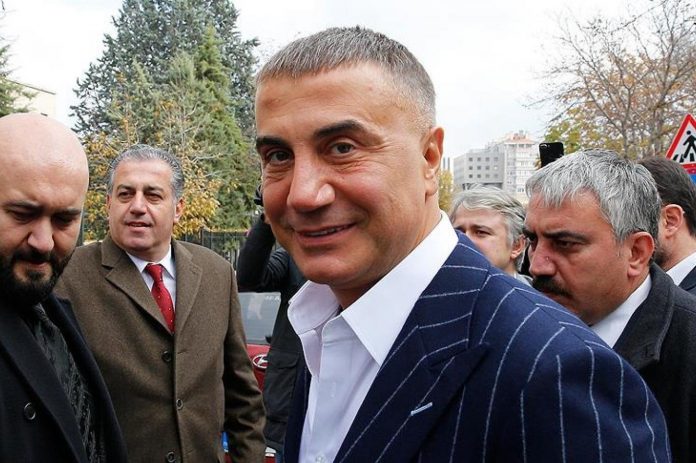 The videos of the mobster Sedat Peker have been keeping Turkey in suspense for weeks. And they also concern Germany. Because the boss of the Turkish mafia, who went underground in Dubai, describes in his ninth video how Metin Külünk asked him for money for Turkish community clubs in Germany. Külünk was a member of the ruling AKP party in the Turkish parliament from 2011 to 2018. For years, he also served in the AKP-affiliated “Union of European Turkish Democrats” (UETD) in Germany as governor of the Turkish President Tayyip Erdogan and his ruling party.

Peker, who grew up in Munich, boasts that he financed AKP rallies and their campaign for the 2017 constitutional referendum in Germany. He probably saw this as a contribution to the Erdogan system, so that he could continue to pursue his dark business unhindered.

Peker recently said in a video that he had “bags” full of cash transported to Germany. He did not name the recipients. From the context, however, it emerges that the mafia money also went to the organization “Ottoman Germania”, which was banned in 2018 for acts of violence, extortion, forced prostitution and other allegations. This group of violent nationalists had good relations with Ankara. Photos of Taner Ay, the former deputy head of the “Ottoman Germania” in Duisburg, with Interior Minister Süleyman Soylu and in the presidential palace prove this on social media.

The Turks are eagerly awaiting what they hear every Sunday at 7.30 a.m. on Peker’s YouTube channel. From Peker, who himself was sentenced to long prison terms, they learn about political assassinations, corruption, the cover-up of crimes, drug trafficking in the dark environment of the state and much more. The mafia boss frankly tells, which politicians he distributed money to. This creates the image of an oligarchical system, in which nepotism and corruption are widespread.

The Turks had already heard a lot, for example from opposition politicians. But now someone is telling the story who has participated himself and has committed himself to it without shame. The impact of his words is reinforced because many are beginning to lose confidence in the Turkish state due to the way the pandemic is dealt with. More than 50 million Turks have seen the videos. A clear majority of them believe that even if Peker is exaggerating at times, he is telling the truth. Every second AKP voter believes that too. After all, the public prosecutor’s office has opened an investigation against Peker, but not against anyone accused by the mafioso.

Peker denies that the Turkish government has any “sense of honor” at its disposal. But he claims it for himself. However, he is not acting out of honorable motives. Because he is waging a campaign of revenge against Interior Minister Soylu in order to get back to Turkey. Alaattin Akici, who had been the most powerful godfather of the Turkish underworld until his imprisonment, was released early from prison at the urging of Devlet Bahçeli, chairman of the right-wing extremist party MHP. Bahçeli is Erdogan’s coalition partner and gives his AKP a majority. As the driving force behind the right-wing extremist organization of the “Gray Wolves”, he is on friendly terms with Akici and holds his protective hand through Soylu.

While the whole of Turkey is talking about the videos, Erdogan was silent about it for weeks. Only when Bahçeli stood in front of Soylu, Erdogan became active. This made it clear who is in charge in Turkey: Erdogan in alliance with the MHP and Soylu. And that is probably the bitterest realization from the videos with Peker.

Erdogan has been relying on the MHP since a coup attempt against him failed on July 15, 2016. When the state then fired 120,000 officials and employees who were believed to be supporters of the preacher Fethullah Gülen, MHP cadres filled the gaps. This was particularly the case in the judiciary and the police, which are now controlled by the right-wing extremist party. The MHP has a voting share of only 10 percent and is not represented in the cabinet. However, the party is currently experiencing the best time in its history: the skilled tactician Bahçeli has no political responsibility, the MHP has more power than ever.

Süleyman Soylu belongs to the growing circle of government members who did not grow up in Islamist movement. He became Minister of the Interior on August 31, 2016, shortly after the attempted coup. Since then he has stood for all developments that are leading Turkey away from democracy and the rule of law and making it more authoritarian. So he equips the police with heavy weapons that were previously reserved for the military. The security apparatus subordinate to him takes on the tasks of the military in the fight against terrorism. And as the first interior minister, he uses armed drones against civilians, which his predecessors rejected.

Soylu began to set up an armed civil parallel police force in city districts, drawing on supporters of the MHP and the “Gray Wolves”. The Minister of the Interior preferably appoints MHP people to high posts in the bureaucracy, for example with the governors of the 81 provinces, especially in the Kurdish south-east of the country. It is therefore not surprising that in a survey by the German Marshall Fund, 24 percent of those questioned describe the state of democracy in Turkey as “bad” and a further 39 percent even describe it as “at risk”.

Peker still shoots himself in at Soylu and leaves Erdogan, for whom he shows a certain admiration, outside. Peker calls on Erdogan to fire Soylu. He would probably like that too. Because things are fermenting at the AKP base. The unscrupulous power man Soylu, who would like to succeed Erdogan, has few friends there. The basis does not like the lateral entrant, upset about the nepotism and Erdogan’s handling of the scandals.

It is now taking revenge that Erdogan has been unilaterally relying on Turkish nationalism since 2016. He did not realize that if he religiously sweetened the poison of nationalism, an even more dangerous poison would arise, says one MP. When it was founded, the AKP was not a nationalist party and of its 84 founding members in 2001, only eight support Erdogan personally. The morale in the party is bad. This is not a good omen for an election campaign.

So Peker shows the cracks in the Erdogan system. The impression is spreading that Erdogan no longer has everything under control and that he cannot stop Peker. Leading AKP politicians such as the parliamentary speaker Mustafa Şentop or the former Justice Minister Cemil Çiek are also calling for clarification, but are rudely whistled back. The conservative Kurds, who were previously loyal AKP voters, are also turning away from Erdogan. However, the Kurds in particular had spoken in favor of the opposition in 2019 during the local elections in the major cities. Since then, they have been considered kingmakers.

The mafioso Peker becomes a danger for Erdogan. Presumably he would like to get rid of his power-driven interior minister. However, MHP chairman Baheli sticks to him, and Soylu, as an assertive actor popular in part of the population, could found his own party and thus take away other important percentage points from the AKP. Financial scandals cannot harm Soylu either.

In addition, Soylu gave a three-hour interview, in which he took a twisted position on Peker’s allegations, with a cryptic hint that he had a lot in hand against Erdogan. On December 25, 2013, when public prosecutors and police officers – who were close to the preacher Gülen – investigated Erdogan’s close environment for corruption, there actually were “money machines,” said Soylu. So a lot of cash had also been stowed away in the Erdogan family’s homes.

If Erdogan and Peker don’t come to an understanding behind the scenes, the thriller could be heading for a grand finale. In a video in which Peker also talked about Erdogan, “IRAN” was written in capital letters on a board next to the seated Peker. Possibly an indication that he could say something about illegal business with Iran.

Today, Peker acts as an informant who sheds light on the dark business of the state. He had worked for this himself once. At the beginning of his mafia career, Peker, born in 1971, worked for Brigadier General Veli Küük, the alleged founder of the notorious secret service JÍTEM in the 1990s. He is said to have killed numerous Kurdish business people in the region, known as the “Devil’s Triangle” between the cities of Sapanca, Izmit and Düzce in the 1990s.

Peker’s revelations stimulate discussion. When young people chanted “No to a mafia state” in Istanbul at the beginning of June, the police beat them up and arrested them. When the independent MP Ahmet Şik recently called Turkey a “mafia state” in Ankara, MHP chairman Baheli made a lightly claused death threat against him.

The “deep state” has been an established term in Turkey’s political vocabulary since the 1990s. It means the cooperation of parts of the state with organized crime, which serves the goal of protecting the state also with illegal means. After all, for many Turks their state is still “holy”. They see themselves as people who live for the state. Sedat Peker agrees. But his revelations are now contributing to the fact that more and more Turks, especially young ones, are questioning the virtues of the state.