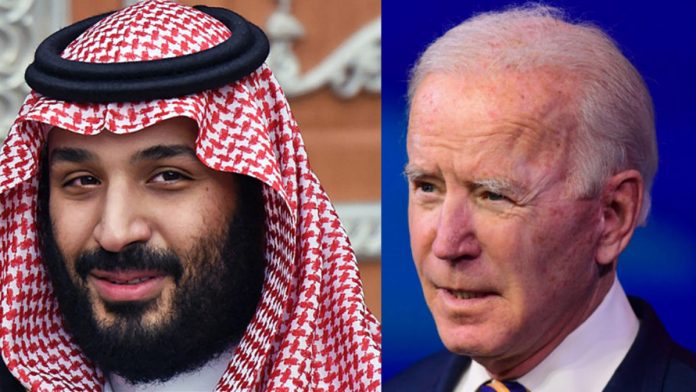 US President Joe Biden is taking a much tougher course with Saudi Arabia than his predecessor. Donald Trump and his administration have pampered Crown Prince Mohammed bin Salman (MBS), the country’s de facto ruler. Biden, on the other hand, published information in which MBS was named as the mastermind behind the murder of the Washington Post journalist Jamal Khashoggi in 2018, imposed sanctions on a number of Saudi officials who were allegedly involved in the murder plot and other harassment against regime critics, and stopped its military aid to the kingdom. For many of MBS’s critics, this realignment of relations with Saudi Arabia does not go far enough.

Human rights activists, journalists and a few prominent ex-officials in the US criticize the fact that Biden did not personally impose any sanctions on MBS. Most of them insist that human rights violators must be sanctioned. Some also suggest that Biden’s influence is so great that he could force King Salman and the rest of the Saudi royal family to replace MBS with a new leader.

However, there is one thing that the critics overlook: MBS has become an integral part of the Saudi decision-making structure. With the support of his father King Salman, MBS has usurped power so unscrupulously and so successfully consolidated it that the US is the only remaining actor who can effectively keep this power in check. With the attempt to isolate MBS, Washington would not force its disempowerment, but deprive itself of the possibility of directing the behavior of the Crown Prince internationally and at home. The US will have to rely on Saudi Arabia’s cooperation on urgent security issues in Yemen and the entire region and will therefore have to come to terms with MBS.

Instead of cultivating the culture of consensus, King Salman puts power bundled in the hands of his son MBS

For decades, Saudi Arabia was effectively ruled by a princes’ war. The princes held important government posts and played a leading role within the ruling family. The important decisions were made by the elderly princes, many of whom had the right to veto. Accordingly, Saudi foreign and domestic policy was determined by consensus. There were seldom changes and only in small steps. As the older princes got on in years and gradually died away, their sons got ready to reorganize the system of the prince’s council for themselves. As successors to their fathers, they advanced to important positions.

However, towards the end of his reign, King Abdullah abandoned the inheritance system and appointed his son Salman, the current king, as defense minister – and not the son of the recently deceased incumbent. In 2015, Salman ascended the royal throne and set about dissolving the system of the Prince’s Council.

Instead of cultivating the culture of consensus, King Salman put power in the hands of his son MBS. He passed over the other princes of his own generation and the princes of the next generation who could have become rivals of his favorite son. As a first step, he appointed MBS, who had previously been his deputy in the Ministry of Defense, as minister. With that he deposed his half-brother Muqrin as Crown Prince. In 2017 he also ousted his nephew Mohammed bin Naif and instead appointed MBS as Crown Prince. In addition, the king made his son MBS chairman of the board of directors of the state oil company Saudi Aramco, the main source of Saudi prosperity. Today he is the undisputed strong man in his country, held in check only by an aging and increasingly weakened king.

The Saudis used to pursue cautious, predictable, and risk-averse policies. MBS is the exact opposite of all of this

This radical restructuring of power within the Saudi ruling family removed the regulatory mechanisms that previously ensured that the Saudis pursued cautious, predictable and risk-averse policies.

MBS is the exact opposite of all of this. He allowed women to drive, curtailed the powers of the religious police and resolved to massively increase consumption taxes. Reform-minded Saudis had been calling for such measures for decades, but the built-in conservatism of Saudi decision-making structures prevented such and other changes. Only MBS had the will and the power to implement reforms of this kind.

The combination of power and moodiness sometimes tempts the Crown Prince to make reckless and counterproductive decisions. In 2017, MBS arrested more than 300 leading businessmen and princes of the country, transformed the Ritz Carlton in Riyadh into the world’s largest noble prison and with this action shook the confidence of investors at home and abroad. In addition, MBS continued a hopeless war of extermination in Yemen, cracked down on critics of the regime and ordered Khashoggi’s murder in 2018.

Despite these own goals, there is no evidence that the other members of the ruling family are resisting MBS

Despite these own goals, there is no evidence that the other members of the ruling family are resisting MBS. In the past, power struggles within the ruling family led to open conflict – military associations commanded by rival princes were hostile to one another; prominent princes resigned from their official government offices, but retained their titles and influence. None of this can be seen today. This may be because MBS secures the loyalty of younger family members by hoisting princes from the next younger generation to posts in the provincial governments and state authorities. If the older cousins ​​oppose MBS, it is by no means certain that the rest of the family would join them.

After he has brought the Saudi state almost completely under his control and has gotten rid of the adversaries within the family, there is only one instance left that MBS can restrict its ability to act: the US. If MBS wants to realize its ambitious economic and political restructuring plans, he has to rely on foreign investments. American investors play a crucial role in this. The Crown Prince cannot play along in the world financial system when he has Washington against him. The US continues to be Saudi Arabia’s most important international partner and security guarantor. No Saudi ruler will want to jeopardize this relationship.

The Trump administration granted the Crown Prince preferential treatment, patronized him and apparently intervened directly in the politics of the Saudi ruling family. The US government granted MBS a very public meeting with the president, preferring him to Mohammed bin Naif, who was then still Saudi Arabia’s crown prince. Thereupon Trump made the unusual decision to take his first foreign trip as president to Riyadh. MBS was named Crown Prince just a few months after that visit, and the White House made no secret of the fact that it was very happy with the move. This privileged treatment on the part of Washington led MBS to believe that he could operate unhindered on the world stage, and it certainly contributed to many of the Crown Prince’s missteps.

Understandably, the Biden government came in with the intention of re-calibrating relations with Saudi Arabia and putting in one or the other guard rail to guide MBS ‘behavior. Biden’s first contact with Riyadh set the route for this new start: The US President spoke to King Salman and not to the Crown Prince. In his capacity as Saudi Secretary of Defense, he received a call from Secretary of Defense Lloyd Austin.

However, the Biden administration did not go so far as to personally sanction MBS for his role in the killing of Khashoggi. It correctly recognized that it cannot declare the Crown Prince to be a persona non grata, and certainly not force the Saudi royal family to replace him if the US do not want to lose any influence on the Saudis’ decision-making behavior.

Any attempt to remove MBS from his central position in the current Saudi power structure would more or less amount to some kind of regime change – and that calculation has never really worked out for the US in the Middle East.

The Biden administration is choosing a smarter, if more rocky, path. This means that it is faced with the demanding task of clearly communicating which behavior it will allow MBS to get away with and which will not. As an ambassador, Biden should appoint an experienced heavyweight who can convey to the Saudis what the US expect from Saudi Arabia: cooperation to end the war in Yemen, an end to the attacks and harassment against Saudi regime critics abroad, help with the strengthening of the Iraqi government (so that Baghdad has other options than Iran in its search for international support) and extensive agreements with Washington, so that stability-threatening adventures such as the boycott of Qatar or the kidnapping of the Lebanese prime minister are not repeated.

As an incentive, the US could offer to help Saudi Arabia to become more independent of oil revenues – but only on condition that MBS is willing to respect the rule of law in his country.