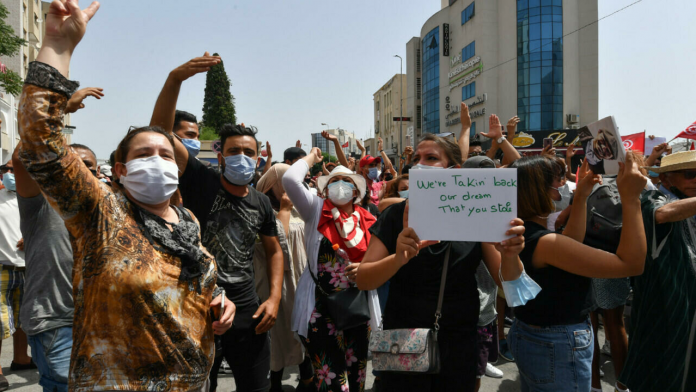 Tunisian President Kais Saied removed the country’s prime minister from office on Sunday evening. Hichem Mechichi will no longer hold any office after violent protests in several cities in Tunisia. In addition, Parliament was dissolved and the immunity of Members of Parliament was lifted. Parliament speaker Rached Ghannouchi called the move a “coup against the revolution and the constitution”.

There were also protests from the population on Sunday, demonstrators had called for the resignation of the government and the dissolution of parliament after the number of corona infections had risen sharply.

Saied announced that he would lead the country together with a new prime minister, without giving any further details. The decision will be the greatest challenge for the Tunisian constitution, which since 2014 has provided for a separation of powers between the president, prime minister and parliament.

“I warn those who are thinking of taking up their arms,” ​​Saied said in a statement addressed to the demonstrators. “Whoever fires a bullet, the military will respond with more bullets.”

The slogan “The people want the overthrow of the regime”, popularized during the protests at the beginning of the Arab uprisings ten years ago, was heard again in Tunis on Sunday. At that time, sustained mass protests had led to the escape of long-term ruler Zine El Abidine Ben Ali. Others shouted slogans against the Islamic conservative Ennahda, the largest party in the country.

Tunisia has been the only country in the region to transition to democracy since the 2011 uprisings. However, the country is suffering from a severe economic crisis that is particularly affecting the younger generation. The corona pandemic has exacerbated the situation. Many Tunisians distrust the ruling elite. Since January there have been protests in the country again. Among other things, they are directed against high unemployment, poverty and corruption.

Saied was elected President of Tunisia in 2019. Mechichi took over the post of Prime Minister last summer.

Algeria, Morocco… Has the Time Come for Military Confrontation?