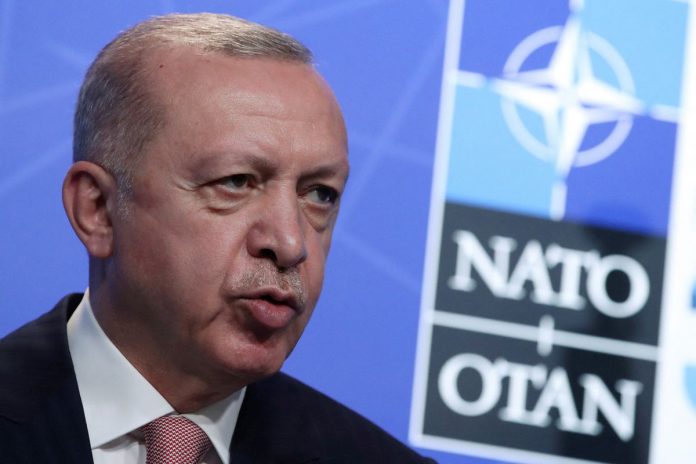 Sweden and Finland had officially applied for admission to the defense alliance shortly before the NATO Council meeting on Wednesday morning, but Turkey blocked the start of the process for the time being. Turkish President Recep Tayyip Erdogan has made it clear several times before that he does not want to agree to Finland and Sweden joining.

What is the background of Turkey’s denial? “Scandinavian countries are inns for terrorists,” President Recep Tayyip Erdoğan said on Friday in his own way, referring to Finland and Sweden. He “doesn’t see membership as a positive thing”. And on Monday, the President continued: When the Finnish and Swedish foreign ministers said they would come to Turkey to discuss the issue, he said: “I’m sorry, you shouldn’t bother. We won’t say yes.”

NATO and EU representatives know the Turkish head of state. He is notorious for playing big gambles, making harsh, sometimes impossible demands, and unabashedly dropping them when it’s in his own interests. It is therefore more likely that Ankara will give in on the NATO issue in the end. The tugging may become tough and Turkey may be discredited as an insecure partner in NATO. But in the end it cannot afford to let the Western alliance appear to be at odds with Russia and unable to act. The Internet portal T24 has already criticized that Erdogan’s bluster in the run-up to the upcoming elections in 2023 is purely domestic policy: “It’s about a few extra votes, not about the interests of the country.”

A former Turkish diplomat who was himself ambassador to Sweden said recently: “Turkey’s traditional policy as a NATO state has always been to promote the expansion of the alliance. But when the president leaves the mosque after the Friday sermon, he says often rather impulsive things. He does not always confirm Ankara’s official foreign policy line.” Such statements were intended by Erdogan for the domestic political market: “The Turks are deeply anti-American and anti-EU,” said the diplomat. “They love it when their government goes against the US or Europe.”

Last but not least, the domestic political motives criticized in the Turkish media are likely to play the greatest role for Erdoğan. The political climate in the country is becoming icier, the clashes between the government and the opposition are getting tougher, and the poor economic situation is costing Erdoğan the support of voters. In an electorate rooted in nationalism across society, the image of a sovereign Turkey that has to be courted by the other NATO states could possibly give the president some tailwind in the upcoming elections for 2023.

Despite talks with the US, Turkey is sticking to its position of blocking the process for Finland and Sweden to join NATO. He had made Turkey’s position on the northern expansion of the military alliance clear to US Secretary of State Antony Blinken, Turkish Foreign Minister Mevlut Cavusoglu told the Turkish press on Wednesday evening after a meeting with Blinken. Basically, however, Cavusoglu rated the talks with his US colleague as “extremely positive”. Blinken said Turkey’s concerns were legitimate, Cavusoglu underlined.

The US government was optimistic on Wednesday that Turkey’s resistance could be overcome. US President Joe Biden’s national security adviser, Jake Sullivan, said on Wednesday he was “confident” that “Turkey’s concerns” could be addressed and that the two Nordic countries could eventually join the western defense alliance. “We have a very good feeling about where this will lead.”

At the NATO Council on Wednesday morning, Turkey blocked the start of accession talks. According to information from alliance circles, Ankara raised security concerns at the meeting and made it clear that they cannot agree at this point in time.

A spokesman for the alliance declined to comment on the talks in the NATO Council. He only emphasized that Secretary General Jens Stoltenberg was determined to find a quick solution for Finland and Sweden. “Both countries are our closest partners and joining NATO would strengthen Euro-Atlantic security,” he said.

Erdogan has meanwhile made it publicly clear again that he makes approval of Sweden’s and Finland’s NATO accession dependent on approaching his country on security issues. For Turkey, the NATO expansion goes hand in hand with the respect shown to its sensitivities, he said in a speech to his conservative Islamic governing party, the AKP, in Ankara.

Sweden and Finland wanted to continue supporting “terrorist organizations”, but at the same time Turkey’s approval for NATO membership, Erdogan criticized. “That’s a contradiction, to say the least.”

Erdogan accused Sweden of refusing to extradite 30 “terrorists”. “NATO is a security association. In this respect, we cannot say yes to making this security body unsafe,” he said.

Until recently, it was unclear how Turkey could be prevented from vetoing Sweden and Finland’s NATO membership. According to diplomats, in addition to statements by the two northerners on the fight against terrorism, arms deals could also play a role. The government in Ankara, for example, wants to buy F-16 fighter jets in the US – but a possible deal was recently politically controversial in Washington.