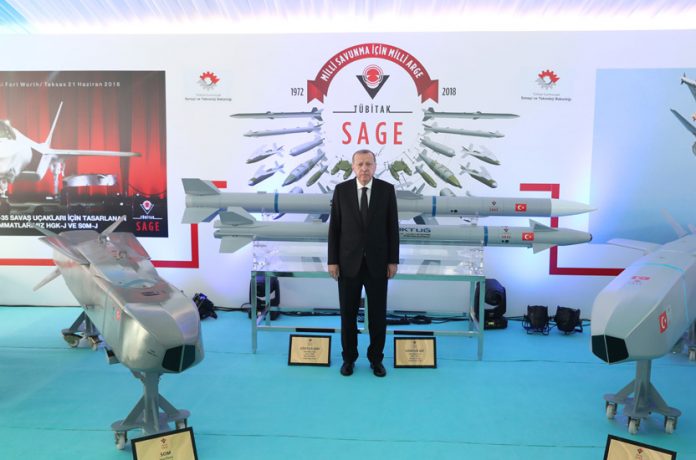 Turkey’s latest official export figures show a sharp decline in the country’s defense and aerospace export sales in the January-August 2020 period, according to data released by the Turkish Exporters Assembly (Türkiye İhracatçılar Meclisi, or TİM).

The value of the Turkish lira has fallen and the economy faces a recession, and the pandemic has presented an unexpected challenge to Turkey’s defense sector. The Turkish economy was hit by a currency crisis, and inflation and unemployment rates are rising. The US dollar was trading at 1.7 Turkish lira five years ago, while the exchange rate today is $1 to 7.5 lira.

Turkey’s growing defense industry had made important progress in the export arena in previous years; the industry, however, faces a number of challenges this year. In addition to the pandemic and financial problems, the Turkish government cannot easily obtain foreign subsystems to equip its platforms due to the arms embargoes imposed by some Western countries and defense giants.

According to TIM figures, the total arms exports of the Turkish defense and aerospace industry dropped sharply to $1.239 million. The total sales of Turkish defense conglomerates was $1.677 million in the same period last year.

Despite the latest figures, Turkey’s Presidency of Defense Industries (SSB) posted, via its social media account, an infographic claiming that defense industry exports will exceed $3 billion in 2020.

According to its website, TİM is an umbrella organization of Turkish exporters, representing more than 95,000 exporters in 27 sectors and 61 exporters associations and was established in 1993 by the Turkish government. The assembly “prepares and shares strategic plans for the development of the country’s economy and exports with the government, and coordinates important works such as export strategy, innovation strategy, incubation centers,” the web page said.

In 2018 the Turkish defense sector saw the strongest export growth among all Turkish industries, and its exports crossed the $2 billion threshold for the first time. In December 2019 the SSB published a strategic plan for 2019–23. The ambitious plan aims to increase Turkey’s defense and aerospace exports to $10.2 billion by 2023. Moreover, according to the plan, domestic industry will meet 75 percent of the country’s military requirements in 2023. The annual revenue of the defense and aerospace industry is expected to rise to $26.9 billion by 2023, from $6.7 billion in 2018. However, recent figures increase doubts about the sector’s ability to achieve the aims of the Turkish government as released in the strategic plan.

According to the annual report released by the Stockholm International Peace Research Institute (SIPRI), Turkey spent $20.4 billion on its military in 2019. Turkey was 16th in the report’s 2019 military expenditure rankings, and its military spending increased by 5.8 percent over the previous year.

“Turkish military expenditure increased by 86 per cent over the decade 2010–19 to reach $20.4 billion. There was a particularly steep increase in Turkish military spending between 2017 and 2018, of 27 per cent, while the increase between 2018 and 2019 was 5.8 per cent,” the report said. The SIPRI report underlined that the world’s nations spent a combined $1.9 trillion on their militaries in 2019, the biggest uptick in a decade.

President Recep Tayyip Erdoğan consolidated arms manufacturers and government procurement agencies under his direct and indirect control and has used the military industrial complex to sustain and finance his rule.

In Turkey, the defense industry is dominated by the Turkish Armed Forces Foundation (TAFF). TAFF was founded in 1987 to “enhance the combat strength of the Turkish Armed Forces” and has played a leading role in the establishment and development of the defense industry. It directly or indirectly controls major companies such as Aselsan (electronics), Isbir (generators and alternators), Aspilsan (battery pack products), Havelsan (informatics), Roketsan (rockets and missiles) and TAI (aerospace and satellites). On December 24, 2017 President Erdoğan issued a decree placing the military ruled “foundation” under his control. Today, the TAFF board of trustees, as the main decision-making organ of the foundation, is chaired by Erdoğan.