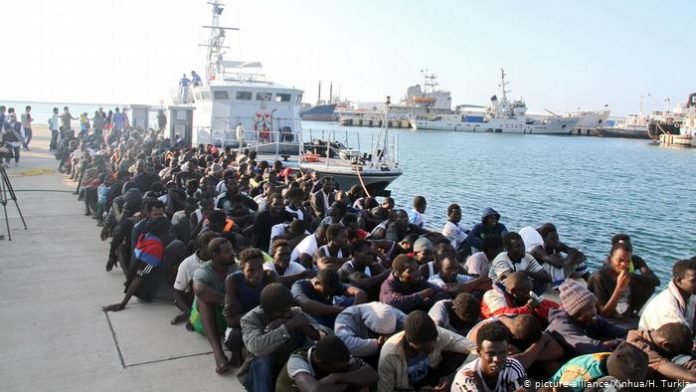 More than 1,400 migrants arrived in Lampedusa on May 17, 2021. In Italy, not only politicians like Andrea Delmastro from the post-fascist party “Brothers of Italy” blame Ankara for the recent increase in the number of boat migrants in the central Mediterranean. These days, Delmastro said in TV: “In Libya, Sultan Erdogan opens the floodgates of migration from the south to threaten Europe – as he does in the east. We only raise a few hundred million for the sea borders in the south. That has to change,” Delmastro demanded. He is not alone with this.

The fact that the situation in Lampedusa has eased since was due to the recently very stormy weather. When the sun shines again and the wind dies down, more overcrowded rubber dinghies and wooden boats as well as rusty soul sellers will set sail northwards from the Libyan coast.

Migrants come back on larger ships

At the end of the “migration season” last autumn, the migrants had come from Tunisia in small rubber and wooden boats. In this early summer, however, they will reach the island from Libya, as in previous years, again on larger boats and ships. On May 9, more than 400 people arrived in Lampedusa on board a two-story fishing trawler, including 24 women and several children. The day before, 325 migrants were counted on another fishing boat from Libya.

The Italian Interior Ministry assumes that up to 70,000 migrants are waiting on the Libyan coast for the next opportunity to cross to Italy. It is estimated that there are a total of 900,000 migrants in Libya – most of them from African countries, especially south of the Sahara, many come from Bangladesh, as well as Syria and Iraq. The statistics of the Ministry of the Interior also reflect this composition of the migrants who arrived in Italy this year: 15 percent came from Bangladesh. Tunisia, Ivory Coast, Guinea and Eritrea follow, then Egypt and Sudan.

Turkey has the greatest influence in Libya

A new government under Prime Minister Abdul Hamid Dbaiba has been in office in Tripoli since February. The civil war instigated by the insurgent General Khalifa Haftar has ended for the time being. However, nothing has changed in terms of Turkey’s massive military presence and Ankara’s decisive political influence on Tripoli. Since the days of Silvio Berlusconi, who concluded a comprehensive friendship agreement with the Libyan ruler Muammar al-Gaddafi in 2008, all the governments in Rome have been trying to regain influence in Libya that had been lost since the fall of Gaddafi in 2011.

Italy’s main competitor today is Turkey under President Recep Tayyip Erdogan, who aggressively asserts Ankara’s claim to influence in the eastern and central Mediterranean. Turkey is currently likely to have the greatest military and political power in Libya among foreign powers. Ankara rejects calls for soldiers and equipment to be withdrawn from Libya in view of the ceasefire and the agreement on the Dbaiba government, arguing that unlike Russia, they did not send mercenaries to Libya supporting the Haftar uprising, but rather military advisers at the request of the international community recognized government in Tripoli. According to Italian media reports, Turkish military forces are pushing ahead with the modernization of the al-Watiya air base they use near the border with Tunisia and are increasing their influence on the Libyan navy and coast guard.

Ankara thus has an effective lever to open the “refugee gate”: If the Libyan coast guard – at the behest of its Turkish military advisors – let the boats and ships with the migrants go north, most of them would soon arrive in Lampedusa, Sicily or Malta.

When new Italian Prime Minister Mario Draghi called Erdogan a “dictator”, it was against the background of arm wrestling between Rome and Ankara for influence in Libya. Draghi had made his first trip abroad as Prime Minister to Tripoli. The Italian Minister of the Interior, Luciana Lamorgese, speaks regularly about the migration problem. On the other hand, Prime Minister Dbaiba and almost his entire cabinet flew to Ankara in mid-April for the regular meeting of the Libyan-Turkish Council for Strategic Cooperation.

Erdogan sits on the longer lever in Tripoli. Rome is trying to persuade its EU partners to accept proportionately new boat migrants with reasonable success. In order to curb the flow of migrants, Rome has brought up an increase in financial aid from Italy and the EU for the government in Tripoli and especially for the Libyan coast guard. Tripoli can only benefit from a potential donor race between Ankara and Rome or Brussels. For Erdogan, the immense “reserve army” of migrants waiting in Libya to cross to Europe is a political strategic pledge that is suitable for weakening the government of his rival Draghi.