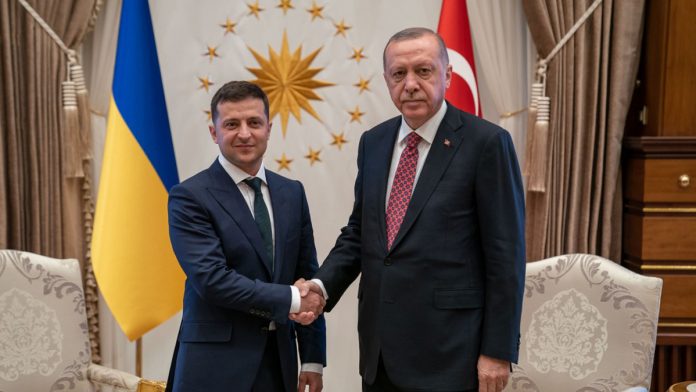 Reckless and irresponsible: At the end of a cycle of excitement closely monitored by the media, Gerhard Schröder, former German Chancellor, saw himself compelled to drive the Greens’ frontman Robert Habeck into the parade. Weapons for Ukraine are an “unhelpful” proposal, explains Schröder, diagnosing the Greens co-chairman with a lack of political experience. Only one week after Habeck’s visit to the front in Eastern Ukraine, a considerable part of the top political personnel discussed his demands.

The relationship between state concerns and election campaign-induced nervousness will be explored in the next few weeks in the political debate in Germany. In any case, Habeck’s demand is in the tradition of Marieluise Beck, who in 2015 had already demanded that arms deliveries to Kiev at least should not be ruled out – rejection came even then from the party leadership and then from the German government. Not surprisingly, Ukraine has sought and found other allies. A key partner: Turkey.

On January 25, the “strategic partnership” between the two Black Sea neighbors celebrated its tenth anniversary. Negotiated and concluded by Viktor Yanukovych, who was chased out of Ukraine shortly afterwards, and Turkish President Recep Tayyip Erdoğan, the alliance has since proven to be remarkably resilient. It survived several changes of power in Ukraine, the beginning of the war in the east, Russia’s annexation of Crimea in violation of international law, tensions between Moscow and Ankara as a result of the war in Syria and the failed coup attempt in Turkey in 2016.

“That changed the entire security architecture in the Black Sea region”

The analyst Yevgeniya Gaber worked in the Ukrainian embassy in Ankara from 2014 to 2018 and experienced the steady intensification of cooperation between the two countries. “The biggest milestone in 2014 was the beginning of Russian aggression and the occupation of Crimea,” she recalls. “That changed the entire security architecture in the Black Sea region,” believes Gaber, who now researches and advises on these issues.

While Berlin is reacting with sanctions against Russia and civil development aid for Ukraine, an increasingly close cooperation between Ankara and Kiev is easing – with astonishing results. The volume of trade between the two countries was already over four billion euros in 2020 and is expected to double over the next five years. In addition, there are around 400 million euros in direct investments from Turkey. Around 1.6 million Ukrainians vacation on Turkish beaches every year.

However, cooperation in the military sector is currently more decisive. On May 10, just a few days after a deployment of Russian troops on the Ukrainian border could no longer be denied, President Volodymyr Zelenskyi made a state visit to Ankara. The heads of state have warm words for each other, it is just one of several visits over the past few months. Even if Erdoğan is calling for a “peaceful and diplomatic” solution to the crisis, the Turkish arms industry is making a significant contribution to Kiev’s readiness for defense.

Central to this are the sale and delivery of Bayraktar-TB2 combat drones. The pride of the Turkish arms industry recently demonstrated its potential on the other side of the Black Sea: In the Caucasus, the Azerbaijani army, with the help of these drones and Turkish advisors, eliminated the Armenian defense within a short period of time. The drone deal will equip the Ukrainian army with similar capabilities – and also give Turkey a decisive advantage.

After western companies suspended the delivery of engine parts as a result of the Ankara-supported war in Nagorny-Karabakh, these are now being manufactured in the Ukraine. The drive for the big sister of the TB2 – Akıncı, which is currently under development, could also be supplied by Kiev. “Both countries want to move away from simple purchases and sales and jointly manufacture products for third countries,” believes the analyst Gaber. Specifically, this could mean that the combat drones in future could be manufactured in Ukraine and exported from there.

For a high-ranking Austrian military expert, the purchase of the TB2 by the Ukraine could “emphasize its ambition to restore its own national territory”. The drone expert and Colonel of the Austrian Armed Forces believes: “The armaments cooperation between Ukraine and Turkey can be seen as a signal for a possible escalation of a currently frozen conflict.”

A reading that the protagonists in Ankara and Kiev are denying: It is always and exclusively about defense. But it was not only the debate about Robert Habeck’s suggestion that it became clear how difficult it is to clearly classify weapon systems as defensive or offensive. After the recent Turkish-Ukrainian summit, Moscow imposed a flight ban on Turkey that will run until June, justified with concerns about the pandemic – a warning shot for the government in Ankara and another blow for the all-important tourism.

At the end of the year, the Ukrainian Navy will be part of a maneuver held by Turkey in the Mediterranean Sea

The Ukrainian analyst therefore believes that Ukraine must decouple its relationship with Turkey from Turkish relations with Russia: “The Turks are extremely pragmatic, they work with partners with whom they can cooperate in areas that are of interest to both sides”, a delicate balancing act for Ankara and another strain on the already complex relationship between Russian President Vladimir Putin and the Turkish head of state. A growing list of conflicts in which the regulatory ideas of the two countries collide, from the Caucasus to Syria and Libya.

The deepening of Turkish-Ukrainian cooperation could add another point to this list in the medium term: the Black Sea. The sea is of particular strategic importance for the two largest neighbors: Russia is building pipelines and securing access to the Mediterranean here, while Turkey in turn controls all shipping traffic in the Bosporus. The recent sea-based landing maneuvers in the Crimea and the associated relocation of ships into the Sea of ​​Azov have shown how important the project is for the Kremlin.

Very losely, Moscow will observe how deepened Turkish-Ukrainian cooperation is developing in this domain as well. It was already agreed last December that the Ukrainian Navy will be allowed to use Turkish corvettes in the future – how many ships of the MILGEM class will be delivered is still unknown. But here, too, part of the production could be relocated to Ukraine.

At the end of the year, the Ukrainian Navy will be part of a maneuver held by Turkey in the Mediterranean. As early as April, the Ministry of Defense announced that it had participated in a planning meeting for the “Dogu Akdeniz” exercise for the first time. An annual drill to which Turkey invites friendly states. In addition to its own ships, Kiev will then probably also send officers who will be trained on the new warships by their Turkish counterparts.

“Today we focus on particularly expensive equipment, such as night vision devices”

Taken together, the image emerges of an increasingly powerful army that no longer has much to do with the desolate troops that were responsible for national defense in 2014. Discussions in relevant circles confirm this impression already. Veteran Vitaliy Ovcharenko, for example, has been organizing appeals for donations to obtain equipment for Ukrainian soldiers for years. “In the beginning, the army basically didn’t exist,” he recalls. Sometimes Ovcharenko and his supporters would have had to procure all of the equipment. “Today we are focusing on the missing ten percent, including particularly expensive equipment that is not always available in Ukraine – such as night vision devices.”

Even the US, long reluctant, has now sent weapons. As of 2018, Washington has approved the sale of more than 300 anti-tank missiles for the highly mobile FGM-148 Javelin system. With a view to the debate about Habeck’s demands for arms deliveries, Alexander Clarkson of London’s King’s College recently etched on Twitter that “many German politicians and commentators have failed to understand that the Ukrainian military is more battle-tested and better equipped than the German Bundeswehr.”

Anyone traveling to Ukraine these days will still hear of great worries. The fear of a further escalation by Russia is high and the desire for military support brought to Habeck is genuine. In conversations on site, however, there is always a completely different possibility of standing by Ukraine’s side: through a moratorium on Nord Stream 2. Only if Ukraine continues to be a transit country for Russian natural gas to Europe, so the argument, one should be ahead further aggression.