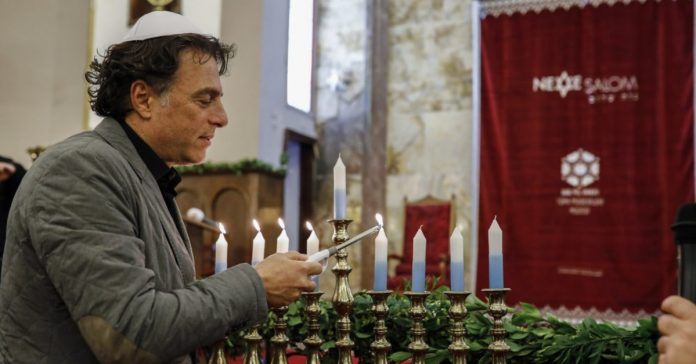 When the ship Drottningholm cast off from Gothenburg on March 15, 1945 and headed for Istanbul, this meant the rescue of 128 Turkish Jews on board from the hell of the Bergen-Belsen and Ravensbrück concentration camps, in which they sometimes stayed for years had perished their lives under the Nazi regime. Luna Harrison, who was ten years old at the time, was one of those who, as a result of Swiss diplomacy, came to Istanbul and thus to her nominal homeland after almost a month’s journey: as one of the many Turkish citizens of the Mosaic faith who lived outside Turkey in the period 1933–1945, deprived of her property, her freedom by the Nazis, she and her parents were deported to the Westerbork camp in 1943 and later transferred to Bergen-Belsen.

When she arrived in Istanbul on April 10, she, like many others, hoped to find a “safe haven” there – instead the Turkish authorities denied her entry, as did the vast majority of Jewish passengers, even though their papers had been checked for months in advance. After they had been stuck on Drottningholm for days, they were given accommodation, where they were held for weeks, sometimes months. Harrison was one of those who were allowed to move to Turkish relatives in Istanbul after a while, where she was often the target of anti-Semitic attacks: the “safe haven” turned against her in the form of bureaucracy and everyday racism. After a year-long struggle, Harrison and her parents, like many of the other Jewish Drottningholm passengers, left Turkey with the help of the Red Cross.

Almost 70 years later, in 2014, the then incumbent Turkish Minister for European Affairs, Mevlüt Çavuşoğlu, spoke publicly on the occasion of the anniversary of the liberation of Auschwitz in order to pay tribute to Turkey’s humanitarian services to persecuted minorities:

“Turkey not only embraced Jews who were sent into exile from Spain in 1492 in the Ottoman period, but also helped and protected its Jewish citizens and became a safe haven for all Jews, especially scientists and academicians, during World War II”

This statement is in conflict with the fate of thousands of Turkish Jews – regular citizens such as Luna Harrison, or former members of the Ottoman Empire and the later Turkish Republic, who have been expatriated and thus often become stateless on sometimes flimsy grounds. They were tortured and murdered in the Auschwitz and Sobibor extermination camps, or in concentration camps such as Mauthausen, Buchenwald and Ravensbrück, without the responsible Turkish authorities taking care of their fate. Estimates point to a number of 2,200 to 2,500 Turkish Jews (with and without official citizenship) who were murdered in the extermination camps alone. About 300 to 400 more suffered various concentration camps, many of whom did not see their liberation. One of those who survived, was Ezra Natan, a Jew became stateless by the Turkish authorities who had tried in vain for repatriation until his arrest in Belgium in 1943. In retrospect, he found hard words for the behavior of the Republic of Turkey:

“In many cases, the Turkish government could have averted all of this for most of its nationals. But despite all the demarches and petitions before and during detention (by people who remained in Belgium), the consular authorities did nothing about the Turkish government No aid sent, no humanitarian aid effort undertaken to save human lives and property (or did the representatives perhaps do so out of hatred?)“

Even if Ezra Natan did not experience this himself – individual representatives of the Turkish Republic were definitely committed to individuals, for example by issuing so-called “courtesy papers” or by actively protesting against the arrest of Turkish Jews with German authorities: one of them is Selahattin Ülkümen, Turkish Consul General on the island of Rhodes, to whom Yad Vashem awarded the honorary title “Righteous among the Nations” in 1989 for his rescue of 52 Turkish Jews, the majority of whom were officially stateless. While Ülkümen’s glorious commitment to the threatened Turkish Jews in Rhodes is undisputed from a scientific point of view, this does not apply to all people who are referred to in the Turkish public as “Türk Schindleri” (Turkish Schindler): Scientists decided to be sceptic referring to the reports by Namık Kemal Yolga (Vice- or later Consul General in Paris) and Necdet Kent (Vice-Consul in Marseille): Both allegedly committed themselves in a similar way to the rescue of Turkish Jews. While their portrayal is by no means certain, they still occupy an important place in the narrative of a Turkish “safe haven” propagated by the Turkish side – for example in the popular film “Türk Pasaportu” (the Turkish passport), which was completed in 2011.

Principle of equality and Kemalism

While science is increasingly questioning the image of a Republic of Turkey actively advocating the rescue of Jews, this representation is still upheld in the Turkish public and in politics. This is placed in the context of a larger master narrative, which postulates an absolute equality of Turkish citizens (guaranteed in the Turkish constitution) in the republic as well as a tolerant attitude towards minorities that goes back over 500 years to the Ottoman phase (based on the admission of Sephardic Jews by Sultan Bayezid 1492). This thesis is closely linked to the Turkish side’s lack of recognition of the Armenian genocide (1915/16).

The state ideology of Kemalism, which was the basis of the young republic in 1923 and was of formative importance for Turkish politics and society during the Second World War, is based on a conceptually not definitively comprehensible combination of six principles (republicanism, populism, nationalism, secularism/laicism , statism, revolutionism), whereby all areas are viewed from the lens of Turkish nationalism. The Turkish concept of nation was officially presented as an inclusive, ethnic and religious concept bridging the gap: One of the most famous traditional sayings of Mustafa Kemal Ataturk – Ne mutlu Türküm diyene (“How happy everyone who calls himself Turk”) – sums up this idea of ​​the independent, unauthorized attribution and a feeling of belonging beyond rigid boundaries. Accordingly, the Citizenship Act, passed in 1928, was also included, but it was tightened several times in the course of the following years, which were characterized by an increasingly anti-minority atmosphere on social and political levels: These additions (including Act No. 2848) brought a legitimation of discrimination against non-Muslim and (ethnically) non-Turkish citizens, based on nationalist-Kemalist ideas about culture, Turkishness and the principle of homogeneity.

The bureaucratic hurdles that the Turkish Jews abroad, who were gradually threatened by the Nazi racial policy, had to obtain (further) recognition of their Turkish citizenship in the 1930s and 1940s by depriving them of their urgently needed protection by a state that appeared neutral during World War II. Denied citizenship are of course not to be seen as detached from Turkish domestic politics and the general social situation in Turkey. While the citizenship law was more and more adapted to the needs of Muslim-Turkish citizens, the Kemalist policy increasingly opposed pluralism, which was expressed in the form of a dedicated policy of Turkishization. Those groups that, despite extensive centralization and an abundance of Kemalist reforms, did not allow themselves to be integrated into the “Yeni Türkiye” (new Turkey) society conceived by the Kemalist ranks, were stigmatized and discriminated against despite the officially upheld principle of equality.

Probably the best-known manifestations of this anti-minority atmosphere and politics of the 1930s and 1940s include the pogroms of Thrace in the summer of 1934 (euphemistically called Trakya Olayları in Turkish – Events of Thrace), in the course of which large areas of property of Jews were confiscated. These outbreaks of violence are not infrequently seen in direct connection with politically controlled homogenization, as they were potentially instigated or supported by the political leadership in order to cause an emigration of the Jewish population from the sensitive border area to Bulgaria and Greece. Further examples of ethnic-cultural social engineering can be found in the recruitment of non-Muslim Turkish citizens for forced labor in 1941, who were classified as Yirmi Kur’a Nafıa Askerleri (soldiers for public works) and heavier physical ones. Work instead of general military service were suspended, and in the Varlık Vergisi, implemented in 1942, whose different tax rates, depending on religion and ethnicity, meant the ruin of many non-Muslim citizens: the extreme tax rates of 156 percent (for Greeks), 179 percent (for Jews) and 235 percent (for Armenians) compared to the five percent payable by the Muslim population, the historian Sait Çetinoğlu describes as “economic genocide”.

Hostility towards minorities as a connection to late Ottoman discourses

The anti-minority policies of the Republic of Turkey were thus expressed in different ways – for Jews abroad threatened by the Nazis, it manifested itself in the form of a wave of expatriation during the late 1930s and during the Second World War, 90 percent of which affected Jews: this came in combination with a general “admission freeze” for Jews seeking repatriation, this is equivalent to indirect extradition to Nazi politics. As mentioned, the inadequate or non-existent protection afforded by Turkey has a clear connection with a Kemalist policy geared towards social engineering, which, with regard to its anti-minority, nationalist form, shows a direct connection to late Ottoman discourses, contrary to the Kemalist mastery narratives. This socio-cultural and socio-political connection to the Ottoman era, which was defamed as degenerate by Kemalism, is also evident in the form of the (early) Kemalist political squad, which consisted mostly of late Ottoman politicians and military, who often had a less glorious past as participants in the genocide of Armenians or ethnic cleansing in Eastern Thrace and the coastal region of Asia Minor: For example, the later Turkish President Celal Bayar (1950–1960), who was involved in ethnic cleansing against the Greeks under the guise of Hoca Galip.

From this perspective, Turkey’s attitude towards its Jewish citizens at home and abroad in the period 1939–1945 can be seen as part of a continuity of late Ottoman, Young Turkish discourses that follow the established master narratives of Kemalism (clear break with Ottoman Empire, republican principle of equality) is diametrically opposed: Even if individuals like Selahattin Ülkümen did not support the anti-minority policy, Turkey was by no means the much-invoked “safe haven” – or at least not for those who, in the Kemalist-nationalist understanding, were not Turks, but only Turkish Citizens.

MENA Research and Studies Center - 2021-04-08
When Saudi security authorities announced a spectacular blow against drug smuggling about a year ago, paper packaging that almost everyone in Syria is familiar...

Centre de Recherche et d'Études MENA - 2021-04-08
The European Union is approaching Turkey again - although there have been setbacks in terms of the rule of law and fundamental rights. The...

MENA Research and Studies Center - 2021-04-08
Concurrent with the Turkish attempts during the past months, to improve its tense relations with the West, specifically the United States, the latter imposed...

MENA Research and Studies Center - 2021-04-08
The Egyptian Foreign Minister, Sameh Shoukry, arrived in the Sudanese capital, Khartoum, accompanied by the Sudanese delegation coming from the Democratic Republic of the...

MENA Research and Studies Center - 2021-04-06
When Turkish President Tayyip Erdogan announced his withdrawal from the Istanbul Convention of the Council of Europe for the Protection of Women against Violence...