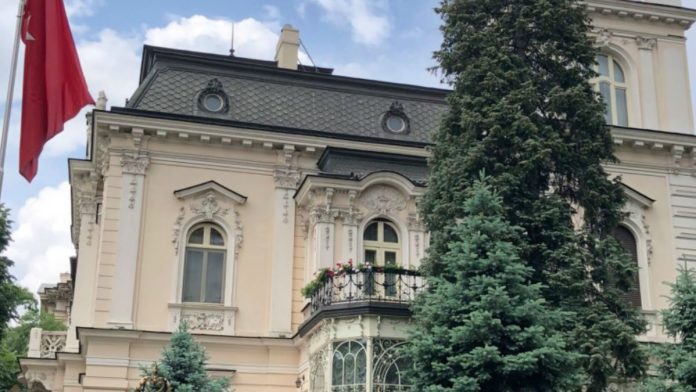 The Turkish Embassy in the Bulgarian capital of Sofia has engaged in a large-scale spying campaign on educators, journalists and critics of Turkish President Recep Tayyip Erdoğan, a foreign ministry communiqué obtained by Nordic Monitor has revealed.

According to the official document, the Turkish Embassy gathered information on Turkish and Bulgarian citizens believed to be affiliated with the Gülen/Hizmet movement, representatives of Bulgarian NGOs, teachers and personnel from local schools and journalists who worked for the Zaman daily’s Bulgarian edition, and reported it to the Turkish Foreign Ministry.

The foreign ministry document revealed that the spying list was conveyed to the police department in Rize province on November 11, 2016 by the ministry’s directorate general for consular affairs to help launch criminal prosecutions on charges of terrorism. The confidential document included the Turkish and Bulgarian passport numbers of the critics in Bulgaria.

The foreign communiqué was signed by the then-head of the department, Özgür Gökmen, who has been serving as first counsellor at the Turkish Embassy in the Austrian capital of Vienna since January 2017. Austria is among those countries in which Turkish government agents have intensified spying activities on Turks and Turkish organizations in recent years.

The foreign ministry communiqué dated November 11, 2016 (The name and passport numbers of the critics have been redacted for security reasons.):

Austria is investigating espionage operations carried out by an Austrian national of Turkish origin who was spying on Turkish citizens and sending reports to security authorities in Ankara. Austrian Interior Minister Karl Nehammer held a press conference confirming that the spy had confessed to being “recruited by the Turkish secret service to spy on other Turkish citizens or Austrian citizens with a Turkish migration background to then report them to the Turkish security authorities.”

Nehammer said 35 persons who entered Turkey from Vienna between 2018 and 2020 were arrested before Turkish intelligence contacted them, demanding their cooperation in exchange for their release.

Last week Feyyaz Ö., an Italian citizen with Turkish roots, confessed that he was ordered in August by Turkey’s National Intelligence Organization (MIT) to kill Kurdish-Austrian politician Berivan Aslan, a member of Austria’s Green Party. Aslan had previously revealed a network of Turkish intelligence agents in several Austrian provinces, including the capital Vienna.

Following a coup attempt in Turkey in July 2016, Turkish embassies and consulates became tools of spying in the hands of Turkey’s Islamist rulers. Turkish diplomatic and consular missions around the world have systematically spied on critics of President Erdoğan, profiled their organizations and listed their names as if they were part of a terrorist organization. Working as a teacher in Gülen-inspired schools or contributing to non-profit institutions affiliated with the movement abroad are considered to be acts of terrorism by the Erdoğan government.

It is clear that Turkish diplomatic missions violate the domestic laws of receiving states and the principles of international law by conducting unlawful information-gathering campaigns and sweeping intelligence operations. Erdoğan’s envoys enjoyed the privileges and immunities described in the international conventions while they systematically spied on critics of the president, collected information on Turks living abroad and transmitted it to headquarters. The document exposed clandestine spying activity in Bulgarian territory that targets critics as part of President Erdoğan’s long arm.

In February Foreign Minister Mevlüt Çavuşoğlu confirmed clandestine spying operations by Turkish diplomats on foreign soil. Çavuşoğlu said Turkish diplomats assigned to embassies and consulates have officially been instructed by the government to conduct such activities abroad. “If you look at the definition of a diplomat, it is clear. … Intelligence gathering is the duty of diplomats,” Çavuşoğlu told Turkish journalists on February 16, 2020 following the Munich Security Conference, adding, “Intelligence gathering and information collection are a fact.”

In his interview with The Globe and Mail, Turkish Ambassador to Canada Kerim Uras also admitted to spying on 15 Turkish-Canadians. “Any embassy would focus on the threats targeting their countries. That’s what every embassy does,” he told The Globe and Mail.

Turkish Ambassador to Uganda Kerem Alp spoke to the state-run Anadolu news agency in March and confirmed that Turkish diplomats collect information on the business activities of Erdoğan critics living abroad and profile their companies as if they were part of a terrorist organization. Alp also revealed how the embassy was gathering information on medical staff, educators and humanitarian volunteers working for Ugandan institutions. “There were some FETO followers who had sought to hide in Uganda and were working in schools or hospitals. … They have been disguising themselves as humanitarian workers,” he told the news agency. FETO is a derogatory term coined by the Turkish government to refer to the movement.

The Turkish government has also benefited from the pro-Erdoğan networks and organizations of the Turkish diaspora. In the last couple of years Turkish diaspora associations have been accused of acting as the long arm of the Erdoğan regime in Europe, and some of them have been put under surveillance by local intelligence agencies. After the coup attempt, some European countries launched investigations into Turkish imams linked to Turkey’s Religious Affairs Directorate (Diyanet), an ideological and political state apparatus tasked with spreading Erdoğan’s political Islamist ideology both inside and outside the country.

As previously disclosed by Nordic Monitor, the foreign ministry sent lists of profiled Turkish nationals in two CDs to the Ankara Chief Public Prosecutor’s Office, the national police and Turkey’s intelligence agency MIT on February 19, 2018 via an official document for further administrative or legal action, the punishment of their relatives back in Turkey and the seizure of their assets.

Then, public prosecutor Adem Akıncı, who received the foreign ministry document on February 23, 2018, forwarded the classified CDs including information on 4,386 Erdoğan critics to the Organized Crimes Unit of the Ankara Police Department for further action. The police conveyed the results of its investigations to the public prosecutor.

According to judicial documents released by the Ankara 4th High Criminal Court on January 16, 2019, the foreign ministry compiled a long list of foreign entities that were owned and/or operated by people who were seen as close to the Hizmet/Gülen movement, a group critical of the Turkish government, in 92 countries in the Americas, Europe, Asia and Oceania.

Moreover, Nordic Monitor revealed how MIT infiltrated refugee camps in Greece in order to spy on opponents who were forced to flee to Greece to escape an unprecedented crackdown in neighboring Turkey.

The Turkish president turned against the Gülen movement after major corruption investigations in December 2013 that incriminated Erdoğan, his family members and his business and political associates. The order to spy on Gülen-affiliated people and organizations came in early 2014, and volunteers of the movement were targeted with criminal prosecutions on fabricated charges of terrorism.

The crackdown on the movement intensified after the coup attempt. Since then, the assets and wealth of individuals, corporations and organizations that were seen as affiliated with the movement were branded as war spoils open to plunder. More than 130,000 civil servants have been dismissed by the government with no effective judicial or administrative investigation, 4,560 of whom were judges and prosecutors and were replaced by pro-Erdoğan staff.