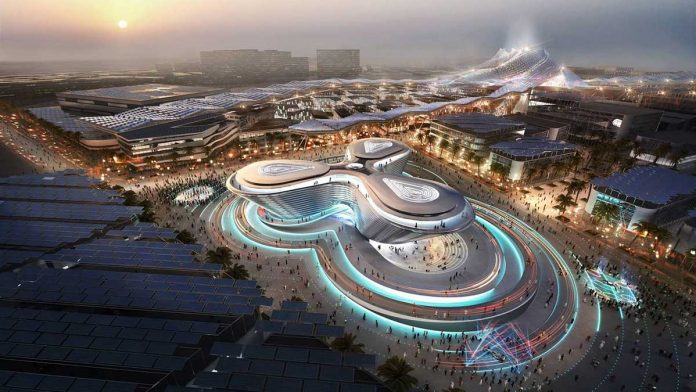 The media office of Dubai showed Emir Muhammad bin Raschid Al Maktoum when he was recently inspecting the final preparations for the expo. The world exhibition was opened last Friday. The area with its imposing pavilions fits seamlessly into the futuristic gigantomania that characterizes the architecture in the emirate, whose rulers pay great attention to image and staging. And the importance that the management and observers in the United Arab Emirates attach to the major event is known only in superlatives.

The director of the Dubai Public Policy Research Center think tank, puts the expo, the first in the region, in line with the first World’s Fair in London in 1851. “It was then that Britain introduced the world to the industrial revolution and set itself a role model presented,” he says. “This Expo heralds another revolution of this kind – the digital one.” And for him it is clear where the Emirates should be in this new era: at the top. A government official says the expo shows the Emirates as a “land of dreams” and speaks of “perfect timing”. The world exhibition, the opening of which had to be postponed by a year in the wake of the corona pandemic, now coincides with the fiftieth anniversary of the founding of the state in 1971. It should, it is said again and again, focus on the next fifty years and the course set. And this should be more peaceful than last.

For years the Emirates pursued an aggressive foreign policy to enforce their interests. They saw this as threatened by Iran and its allies as well as by the uprisings of the Arabellion in 2011, the Islamist Muslim Brotherhood and their supporters: above all Turkey and Qatar. Emirati troops intervened in Yemen in the ranks of a Saudi-led coalition against the Iran-sponsored Houthi rebels. In Libya, the warlord Khalifa Haftar received arms aid, while the Turkish military even intervened directly in the war on the part of the Haftar opponents. The Emirati Crown Prince Muhammad Bin Zayid Al Nahyan, the de facto ruler of the country, is considered to be the driving force behind the blockade campaign against Qatar in the summer of 2017. The stubborn emirate should end its support for the Muslim Brotherhood and adopt an anti-Iranian line.

To mark the founding anniversary, the Emirati rulers have now announced new priorities. They promote de-escalation and good neighborly relations. The further development and restructuring of one’s own economy in order to make it independent of the oil and gas revenues should have priority. In August, the Emirati National Security Advisor Tahnoon Bin Zayid, the brother of the Crown Prince, visited Turkish President Recep Tayyip Erdogan in Ankara. Anwar Gargash, one of the country’s most important diplomats, described the meeting as “historic and positive”. Tahnoon Bin Zayid also posed for a photo that represents the thaw like nothing else. In shorts and a sports shirt, he appeared together with the Emir of Qatar, Tamim Bin Hamad Al Thani, also in shorts, and the Saudi Crown Prince Muhammad Bin Salman, also in a casual holiday outfit. Qatar, which has been confronted with closed borders for years, will be represented at the Expo with its own pavilion.

In Dubai and Abu Dhabi, the policy of détente is generally presented as the result of a sober inventory after fifty successful years, which are now to be celebrated with the Expo. Emirati politics professor A. Abdullah goes even further. “The leadership of the Emirates has never been as confident as it is today,” he says. “We exceeded our own expectations in terms of our development – and that in what is perhaps the most dangerous neighborhood in the world.” Abu Dhabi’s foreign policy adventures were so unsuccessful that disillusionment was likely to have played a decisive role. The Emirati military withdrew from the Yemen war in 2019. Qatar has not let itself be trimmed. Haftar has suffered a military defeat. And the pandemic has clearly shown the Emirates their own – especially economic – vulnerability.

The Emirates seem to be recovering from the Corona crisis. The hotels are well filled, as are the restaurants. The airline Emirates is hiring again after a massive wave of layoffs, the real estate market is picking up. However, despite all the achievements, there are still enough challenges and unanswered questions about the future: The competition with other Gulf states that are promoting similar reform campaigns. The question of the identity of the country, which is dependent on foreign labor and expertise and whose leadership must at the same time keep an eye on a largely conservative Emirati minority population that has got used to far-reaching privileges. A ministry for tolerance was established, Christians, Hindus or Jews are allowed to practice their religion freely, with clear red lines and just as clear who draws them.

Low-wage workers are still barely protected from exploitation and live in armies under poor conditions in mass accommodation. Residence permits – even for the middle class or highly qualified professionals – are usually so strongly tied to a job that foreigners have to leave the country when they retire. Only a selected minority currently has the chance of an Emirati passport: investors, scientists, engineers, doctors and cultural workers. Some of them are likely to be deterred by the fact that there is still a blatant maladministration in terms of human and freedom rights, which is also not conducive to an innovative climate. Those who think differently face persecution and imprisonment. According to an assessment by the US think tank Freedom House, the Emirates play in a league with authoritarian surveillance states such as Russia or Iran and are world leaders in surveillance technology.

The Emirati view is directed not only to the west, but also to the east, from where critical questions about freedom deficits are less likely. To India, for example, and not least to China, by far the most important customer for fossil fuels from the Gulf. The Emirates are “in the heart of the world,” says one official: “We could be a link between East and West.” The Expo also stands for this role. He therefore does not like the fact that the signs are pointing to polarization in the conflict between Washington and Beijing. Nor is there a comparison from more interventionist times, when the former US Secretary of Defense James Mattis described the Emirates as “little Sparta”. “We are not Sparta, and we are not small either.”