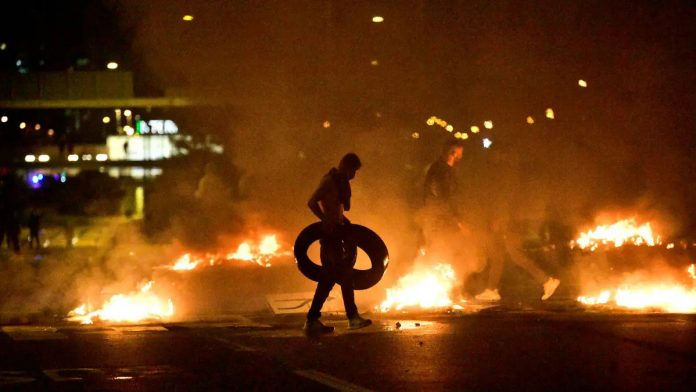 “I don’t understand why this is allowed,” a Swedish pensioner said on Swedish TV: “That’s racist and hate speech. That should be forbidden.” Sweden’s police saw things differently: the Danish neo-Nazi Rasmus Paludan was allowed to undertake a Quran burning tour through southern Sweden last week, during the Easter holiday. A provocation that triggered protests and sometimes culminated in violent riots. It achieved exactly the results that the founder of the “Stram Kurs” party had hoped for: There you have proof of the hostility to democracy and intolerance of Muslims.

“Lots of Qurans are being burned. We also take pig’s blood with us. We’ll throw that over it,” the announcement on the Facebook account of his party said, which was founded in 2017. In six different cities, he chose the suburbs with a high proportion of migrants as the backdrop for his performances, so that he could be sure that his actions would really trigger the reactions he had hoped for.

The actions were the repeat of a similar “Easter tour” organized by the 40-year-old lawyer, who has a criminal record for sedition, before the 2019 parliamentary elections in Denmark. The Danish Justice Minister at the time, Søren Pape Poulsen, had condemned it as a “circus that only serves to sow and provoke discord”. Paludan had already planned to burn the Quran in Sweden back in 2020, which prompted Stockholm to ban him from entering the country. This no longer applies because he has meanwhile – having a Swedish father – also accepted Swedish citizenship.

Paludan wears the summary of his political message on the baseball cap he likes to wear during his performances: “They shouldn’t be integrated, they shouldn’t be assimilated, they should get out”, from which he wants to ‘cleanse’ Denmark, regardless of their countries of origin. The reason: there are “genetic differences” between people from different cultures, which is why their coexistence only creates conflicts. In an interview, he confessed that with his actions he was “of course” pursuing the goal “to show that Muslims are violent”. The preliminary balance of the Paludan tour: At least 200 people took part in general riots at various venues, which the original protests had turned into, according to the Swedish police. 26 officers and 14 other people were injured, 20 police vehicles were destroyed.

Jonas Hysing, the national chief of operations for the Paludan operation, said it was not the first time that the police had been forced to protect the actions of extremists against protests: But the sometimes brutal violence against police officers that this time resulted in was one never experienced before. Stefan Holgersson, police researcher at Linköping University, blames at least part of the insufficient preparation and wrong tactics used by the police, which used too few resources. He also wonders why, after the first violent riots, the other gatherings of Paludan were not simply banned, as Denmark did in 2019, for example.

At least in one place Paludan’s recipe for provocation failed. In Jönköping, the beginning of his speech was drowned out by the ringing of church bells. After a short protest with prayer, protesters and spectators left the locked venue, and Paludan was simply left in an empty marketplace. The police officers then only made sure that he properly picked up the Quran he had burned and the pages torn out.