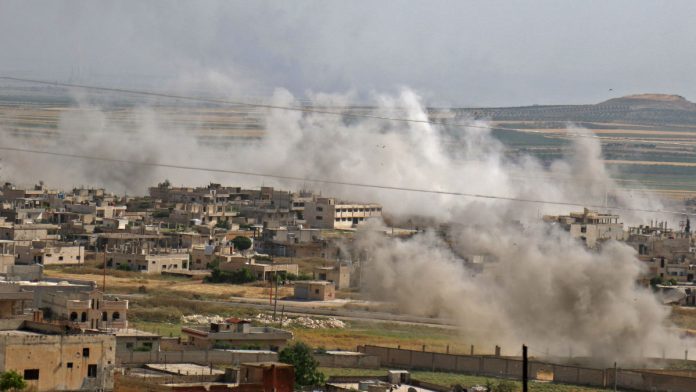 In 2013 and 2017, hundreds of people died in attacks with chemical weapons by the Syrian regime. Now the highest German investigative authority could take action.

The chemical weapons attacks on the suburbs of Damascus in 2013 and on Khan Shaikhun in 2017 are among the most serious crimes of the Syrian war. According to informations, Syrian and international human rights groups filed criminal charges together with German law enforcement with the aim of the highest German investigative authority initiating proceedings against those responsible, securing evidence against the Assad government and arrest warrants of suspected war criminals and crimes against humanity.

The authorities in Karlsruhe, where the office of the German head prosecutor is located. So-called structural investigations are already underway to investigate war crimes in Syria, which have led, among other things, to charges against former secret service employees who are alleged to have been involved in torture.

The criminal complaints are provided with hundreds of pages of documentation, which not only contains the most detailed reconstruction of the attacks with the nerve agent sarin and the chains of command in the Syrian army, but also a number of new testimonies. Seven of the survivors of the attacks quoted are said to live in Germany, others in the Schengen area. The residence of victims or perpetrators of international law crimes in the federal territory is an important factor when investigators decide whether to initiate proceedings.

“Our years of investigation on behalf of the victims have collected extensive evidence that high-level officials in the Syrian government are responsible for the sarin attacks on Ghouta and Khan Shaikhun,” a representative said. These were part of a broader and deliberate use of chemical weapons against opposition areas since 2012. Now it is time for law enforcement officers in Europe with the appropriate skills to jointly investigate the use of chemical weapons against the Syrian population. In Sweden, Norway and Spain, too, the authorities have the right to conduct such investigations into war crimes and crimes against humanity.

As far as is known, all of the suspects named in the documents are still in Syria. Nevertheless, “valuable evidence is available in Germany and Europe,” says Steve Kostas, senior lawyer at the New York-based Justice Initiative. It is “essential that investigators research these crimes now to ensure that prosecution of those responsible is possible in the future.” The possibility of prosecuting crimes under international criminal law does not expire, so lawsuits would still be possible in decades. By issuing international arrest warrants, suspects can be arrested while traveling abroad or at least their freedom of movement can be considerably restricted.

According to documents, at least 818 people were killed in the attack on the Damascus suburbs of Samalka and Ain Tarba in the early morning of August 21, 2013. It was the heaviest chemical weapons attack in the entire war. The attack was ordered by Maher al-Assad, the president’s brother and commander of the 4th division of the Syrian army. In the days before the attack, his troops had tried unsuccessfully to advance into the rebel areas of the Ghouta, a belt of suburbs formed from farming villages.

Khan Shaykhun was bombed by the Syrian air force on April 7, 2017 as part of an offensive by the regime to recapture the strategically important M5 connecting road from Aleppo to Homs and Damascus. Chemical weapons were also used, killing at least 70 people and injuring hundreds. In both cases, international investigations had already identified attacks by the Syrian regime as the only plausible and credible course of events. Supported by Russia, the regime denies any responsibility to this day.