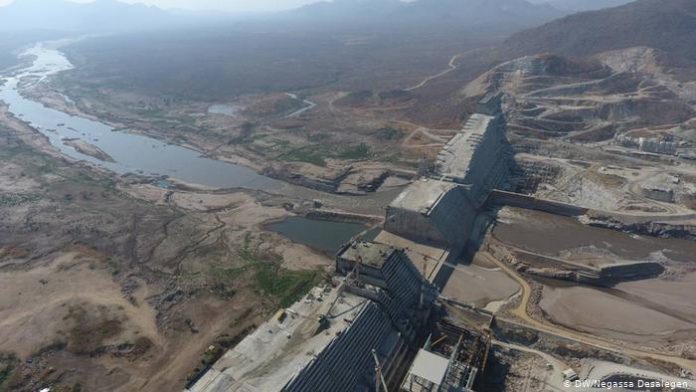 The reactions of neighboring countries varied between concern and anger. The fact that Ethiopia has started the second filling phase of the great Nile dam is “a violation of international laws and norms,” Cairo is saying. The Sudanese Foreign Ministry even spoke of an “imminent threat”.

The dispute over the “Grand Ethiopian Renaissance Dam” (GERD) has divided the region for many years. There have already been threats of war, and repeated attempts for mediation, all of which ultimately remained unsuccessful – most recently in April. The huge dam in northwest Ethiopia has even contributed to a reorganization of regional alliances. Now, the abundant summer rains begin in the Ethiopian highlands, which gave the reason to begin with the second filling phase – the first took place a year ago.

At the same time, the ongoing dispute becomes a topic for the United Nations Security Council. According to a Tunisian draft resolution, which goes back to an Egyptian and Sudanese initiative, the Ethiopian government is to be asked to stop filling the reservoir. The three countries are called upon to re-enter into negotiations and to conclude a “binding agreement” within six months. In the meantime, no country should endanger the negotiation process by words or deeds.

It is this demand to await the outcome of negotiations that Ethiopia has repeatedly ignored. The GERD is a central project for the energy security of the country and its more than 110 million inhabitants. The dam, which is 80 percent completed, will one day be the largest hydropower plant in Africa and the seventh largest in the world. When it is fully operational – according to the plan in 2023 – the annual output should be 6,000 megawatts. Ethiopia could even become an electricity exporter.

The dam on the Blue Nile, one of the two tributaries of the Nile, is 1.8 kilometers long and 145 meters high. The five billion dollar mammoth project began in 2011. Even then, it caused considerable irritation, especially in the northern neighboring countries, which lie downstream of the Nile. For Egypt in particular, the river has always been vital. The country, with a population of around 100 million, covers more than 90 percent of its water needs from the Nile. About 85 percent of the water that reaches Egypt from Sudan comes from the Blue Nile. A major reduction in the amount of water would be an economical disaster for Egypt. In any case, according to a report by the US think tank “Wilson Center” published in early July, the country is struggling with water shortages due to uncontrolled population growth and wasteful irrigation practices. In May, the Egyptian Ministry of Water announced that due to the construction of the GERD, rice cultivation would only be permitted on an area of ​​around 300,000 hectares in the current year – in 2019 it was almost 450,000 hectares. Sudan had complained about water bottlenecks after the first flooding phase of the dam basin last year.

Egypt’s resistance to the project was correspondingly vehement from the start. Cairo has repeatedly threatened the use of force, more or less openly. President Abd al-Fattah al-Sisi said in April that “all options are on the table” – while on other occasions, he called for a peaceful solution. However, it is difficult to balance the interests of the states. One of the reasons for this is that Cairo insisted for a long time on an agreement that dates back to colonial times and gives it a strong preference over the more southern Nile bordering countries. An agreement dating back to 1929, when Egypt and Sudan were controlled by Britain, gave Egypt 48 billion cubic meters of water a year and Sudan four billion. Other countries were not involved. In addition, Egypt was granted the right to veto all construction projects on the river. In 1959, the now independent governments in Cairo and Khartoum renewed the agreement, which increased Sudan’s stake.

The Egyptian government takes the position that both agreements are still valid, even if they are no longer appropriate to the situation. In contrast, Egypt and Sudan are the only countries in the so-called Nile Basin Initiative that did not join an agreement from 2010 that deals with the fair and sustainable use of the resources of the more than 6600 kilometers long river. Cairo and Khartoum were particularly bothered by a formulation that prohibits “significantly impairing the water security of another Nile basin country”. This seemed too weak to them.

In addition to the lack of regulations on the use of the Nile water, which would be internationally recognized, political factors also complicate the conflict. The Sudanese minister for irrigation and water, Yasir Abbas, said in a recent interview, that Ethiopia’s unwillingness to a compromise also has to do with the war in the Tigray region, where the central government has been fighting the former regional government since last November. Abbas suggested that Prime Minister Abiy would have to be tough on foreign policy in order to secure domestic support. Indeed, diplomatic observers considered it unlikely that Abiy would compromise ahead of the Ethiopian parliamentary election on June 21st that he could possibly sell poorly at home. GERD has become a symbol of national pride in Ethiopia. It was hoped, however, that a solution could be found in the following weeks before the rainy season sets in.

The struggle for an agreement is made more difficult by a simmering border conflict between Sudan and Ethiopia. In the so-called Fashqa triangle, located at the border triangle Sudan-Ethiopia-Eritrea, there have been repeated disputes over fertile land since November. This is on the Sudanese side of the unmarked border, but is traditionally used by Ethiopian farmers. Khartoum accuses Addis Ababa of demanding to expand Ethiopian-controlled territory, militias killed civilians. Ethiopia rejects that. This conflict, too, has led Sudan, which for a long time was not explicitly opposed to the dam project, to lean closer to Egypt. Recently, Cairo and Khartoum signed an agreement on military cooperation, which should also contain a defense pact. And at the instigation of Egypt, Sudan called on the UN Security Council to intervene because the GERD threatened international security.

From Ethiopia, Egypt and Sudan are demanding a binding agreement on how quickly the dam can be filled and how much water is allowed through. However, it is unlikely that the Security Council will come to their aid. French ambassador to the UN, Nicolas de Rivière, who currently holds the presidency, said this was not a problem that the Security Council could solve on its own.

The UN Security Council is now to deal with the dispute. This could set a precedent for other regions and continents as well.

Now Egypt’s President Abdel Fattah al-Sisi is intervening in the UN Security Council with the backing of the Arab states, for days, Egypt’s Foreign Minister Sameh Schukri has been courting allies in New York.

He paid homage to the UN ambassadors of China and Russia, as well as their colleagues from the other veto powers France, Great Britain and the USA. Schukri spoke of a “dangerous escalation on the part of Ethiopia” before leaving Cairo, promoting a “fair and balanced solution”. The Security Council had to live up to its responsibilities and restart negotiations.

France’s UN Ambassador Nicolas de Rivière, who held the rotating chairmanship of the Security Council in July, said there was not much the panel could do other than hear the concerns of everyone involved and urge them to work together. A spokesman for UN Secretary-General António Guterres said it was important that “no unilateral actions are taken that would undermine any search for solutions”. Both statements will have been received with relief in Cairo.

The handling of the water dispute in the Security Council could, however, have a precedent character: There are also cross-border river systems in other regions, especially in the Middle East and Asia, on which hundreds of millions of people depend for their water supply, without any agreements on its use among the neighboring states and water quotas there. Population growth and climate change are exacerbating the widespread water scarcity, also in Egypt. This quickly gives rise to existential problems with far-reaching implications for international peace and security – safeguarding them is the task of the Security Council.