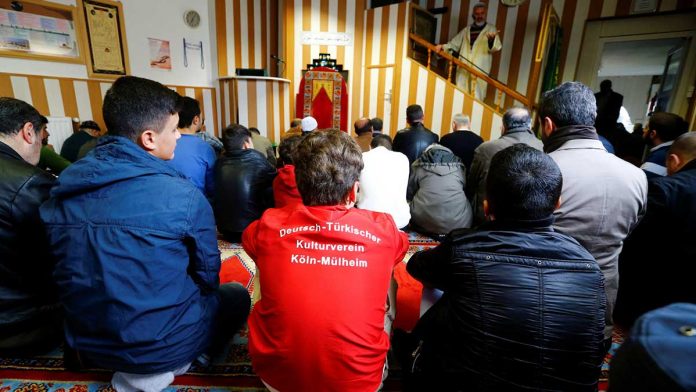 Usually only politicians talk about the EU. Young people with a migration background are hardly taken into account, mainly because most of them are not allowed to vote.

Not only the migrant youth, „Generation Z“ and the youngsters being born in the years after in general have probably a different, more positive position on Europe, the EU and a more broader approach towards European integration and political interaction.

But we also have shortcomings in general: Especially school education in Europe is not seen as a pioneer in explaining and promoting the role and importance of EU institutions, how they function and how they are responsible for our daily life.

Adding the fact that a good school education, a university degree or a qualified job education is nowadays once more a question of social background and financial resources from the family in more and more EU countries, equality of knowledge, education and reflection is becoming a social privilege again.

“We need free German courses” was one of the points most frequently mentioned by young Muslims at a panel discussion of the European Youth Parliament in Vienna. In addition to the required German courses, there was often a need to lower the prices for organic products and public transport tickets. The students also had a lot to say about health. Medicines are too expensive and the waiting times for an appointment with the doctor must be significantly shorter. The students presented problems and sought solutions. Those who were normally always ignored finally had their say.

The “European Youth Parliament” is a pilot project of the City of Vienna and a new format of political communication and education for young people. The event was prepared and designed by the Institute for Journalism and Communication Studies. The main goal was for the young people to deal with and discuss four EU-related topics. This happened in so-called “world cafe rounds” in four different rooms, in which “war and peace”, “sustainability”, “job and training” and “health” were discussed.

The young Muslims defined various topics of interest for them and their community. “Today I am responsible for education and health. I’ve prepared myself and I’m really looking forward to discussing it with the others, one said.” The forum began with lectures, all of which dealt with the European Union and its work. Especially when the question “Who is responsible for maintaining democracy and security?” was thrown around, everyone brooded. After a moment’s thought, the students called out answers. “Politicians!”, “The government!” or simply “the EU!” All correct, but the real answer would have been “everybody!”. Because all people, regardless of age and origin, can and must participate in EU-relevant topics.

After the end of the lectures, the students went together with the journalism students to four rooms and locked the doors. There were two 45-minute discussion rounds per topic and room, in which solutions to possible problems were to be found. After almost two hours, the collected results were presented in a panel discussion in the plenary.

As with similar events, people who are interested in the topic take part in such events. Other, not to say apolitical interested parties, are hardly to be found in such registration lists.

An EU-specific topic like that of the “European Youth Project” should not only deal with security, health, education and sustainability. In particular, the cornerstones of Europe, common values, separation of powers, an independent and secular legal system, deserve more attention in political education.

This applies not only, but also particularly to young people with a migrant background. Studies and surveys by the “Wissenschaftszentrum Berlin (WBZ)” suggest that especially young people of the third or fourth generation in Germany and Austria are very skeptical about European values, support anti-Semitic stereotypes, advocate Sharia as the primary legal norm, Islam to play a leading role in government action.

Responsible for these worrying developments are, on the one hand, Islamist ideologues, who are gaining more and more influence in the Muslim communities – the Muslim Brotherhood, for example, should be mentioned -, nationalistic-religious preachers in the Turkish associations, but also an integration policy in Europe, which is more dividing in some states or shows no particular interest in a diverse society.

Opportunities for advancement for everyone, interest in socio-political issues should be the cornerstones of every European citizen, no matter what family background he or she belongs to. It is therefore important that European politics, but also society, create these opportunities and actively support them. At the same time, groups that oppose European values must be fought with constitutional means. The rule of law has all the tools at its disposal to stop the growing influence of groups such as the Muslim Brotherhood, Turkish nationalists and dubious financing from abroad.